Give and It Shall Be Given

An Islamic man discovers the truth and works for God.

Moses gave the children of Israel a command just before entering the promised land. “If there is among you a poor man of your brethren, within any of the gates in your land which the LORD your God is giving you, you shall not harden your heart nor shut your hand from your poor brother… For the poor will never cease from the land; therefore I command you, saying, ‘You shall open your hand wide to your brother, to your poor and your needy, in your land.’ Deuteronomy
15:7, 11.

Jesus gave the rich young ruler advice that would have led him to the opportunity of a lifetime. “So when Jesus heard these things, He said to him, “You still lack one thing. Sell all that you have and distribute to the poor, and you will have treasure in heaven; and come, follow Me.” Luke 18:22.

There is a layman in Malawi, Central Africa, who claims these verses as promises. Golden Lapani believes that you must “Give, and it will be given to you: good
measure, pressed down, shaken together, and running over will be put into your bosom. For with the same measure that you use, it will be measured back to you.” Luke 6:38.

Golden was a faithful Muslim who went to prayers five times a day. He was active in his home village, and made a stable income as a teacher to support his family. However, all this changed one day when a Seventh-day Adventist evangelist arrived in his village to conduct meetings. As a Muslim, Golden Lapani knew he should not attend meetings held by Christians. Islam had taught that Christian teachings would poison his mind. 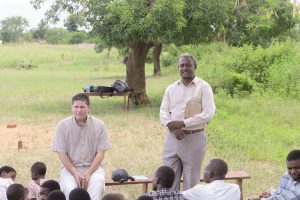 Only a few days before the meetings began, he had a peculiar dream. In his dream, he was told that a man would be holding meetings in his village, and that he should attend the gatherings to hear what was said. Twice, Golden had the same dream. He believed that Allah was calling him to go and listen to the teachings.

As he sat towards the back of the meeting place, Golden heard Bible truth for the first time. He learned what the Bible taught about the rise and fall of nations in Daniel 2, the Second Coming, the end of the world, and Jesus being the One who died on the cross for his sins. The love of God melted his heart. After attending every night, the messages convinced him that Islam was a false religion, and that Jesus was “the way, the truth, and the life.” John 14:6. Golden decided that he needed to go all the way with Christ and be baptized, despite the threats from his parents and his Muslim community.

Golden’s love for God, and for those whom Christ died, did not diminish after his conversion. Now without a regular job to draw income from, he began walking to other villages to share the love of Jesus with those whom he had never met. He often carried food with him to feed those in desperate situations along the way. Invitations for Golden to share the things he had learned with others grew more frequent. Eventually, he was able to buy a bike to take him farther on trips to other villages. Some of the communities he visited to speak in, required a day’s travel by bike.

Golden was asked to perform meetings in the northern part of the country, at a great distance away. The only way to get there was by bus, and it would take a five-day journey. He gladly accepted the call to minister to those who urgently needed to hear God’s final warning.

Today, he has a somewhat dependable vehicle in which he can travel all over the country relatively quickly. Golden is now able to conduct scores of evangelistic campaigns from the north to the south in Malawi. By faith in God’s power, he has raised up over 58 churches, and has led thousands of precious souls to make a decision for Christ. Churches in Malawi’s surrounding countries have invited him to conduct meetings in their cities and villages, thereby bringing many more to Christ by Golden’s outreach.

A few years ago, Golden began a ministry called, “God Speaks Today.” It focuses on evangelism and training others to win souls to Christ. His ministry supports many Bible workers when he has the funds to pay them. After many years in God’s service, his continual prayer is that God will help him to bring one more person to the truth. During my recent trip to Malawi, I witnessed firsthand the work that Golden is doing among the Muslim people and I was very blessed.

Pray for the work of evangelism and personal ministry that Golden is doing.

Donate. Funds are needed to support Bible Workers entering new fields. A Bible worker can be supported for $150 per month. Many evangelistic meetings have been held, but the new believers have no church building to worship in. Many are worshipping under trees to shade them from the hot African sun. A church can be built for around $600. If you feel impressed to help this work, donate here or mark your check “Malawi” and send to: