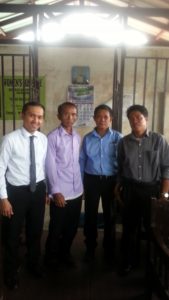 Brother Wilson is in purple

One Sabbath morning we received news that our church brother, Wilson Majasol, was suffering with severe arthritis. In fact, the severe pain in his jaw, neck and chest prevented him from being able to open his mouth and eat! I was quite worried because the herbs that I sent to to him were not treating his problem. Wilson is poor. He has no regular job and has nine children to support.

After our divine service, I asked two church elders to come with me to pray and anoint Brother Wilson as James 5:14 instructs. As we walked to the house, I instructed my fellow elders that when I put my hands over the head of Brother Wilson to anoint him, they should also raise their hands over his head.
When we arrived at Wilson’s house, we saw him lying on the floor, since they don’t have bed. He couldn’t move his head, and half his body seemed almost paralyzed from the stiffness and pain. I gave them some food and money that the church brethren had donated. Then we prayed. After we prayed and laid our hands over his head, I put olive oil in my hand and touched his neck, shoulder, arm and knee, saying, ‘The Lord shall heal thee.’
After the anointing service we left Wilson’s house. After 30 minutes, Wilson could eat and move his neck and body. He said the pain was gone. Praise God! I asked myself why it took 30 minutes for God to heal Wilson. Then I thought, ‘Maybe my faith lacks 30 minutes.’ I smiled.
In other news, at the end of this month, October 2016, I will baptize several souls we have been studying with!
—Joseph Brian Palange, gospel worker in the Philippines