Youth of the Land Arise

When I look into my past, it seems so impossible that I became a new creature in Christ. But by God’s grace, all things are possible.

My name is Junrald Agan. I’m 23 years old and come from a Catholic background. I was full of vices, but God called me from the darkness of sin into His marvelous light. I was baptized in 2009 and two weeks later, Brother Dexter from Advent Hope took me to Mountain Heights Missionary Training School. It was hard to adjust to the new surroundings. We had to travel over stones and through grass to haul water from a kilometer away. We were fully dependent on the rain for our drinking water and for washing our clothes. 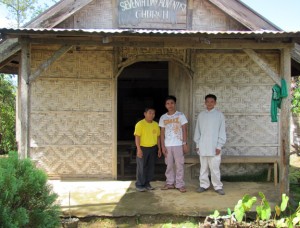 In spite of the difficulties and trials I met, God would give me more lessons to learn. Just as a plant needs cultivation in order to grow, our characters need cultivation—not just for one day, but for our whole lives. Weeds are different. Like sin, they don’t have to be cultivated, they just flourish on their own, unless we constantly work at pulling them out.

I remained at Mountain Heights for two years and after graduation my classmate Noelbin Moreno and I went to Davao Oriental for my practicum. It was there that I realized that theory and reality were two very different things. God said: “Go therefore and make disciples of all the nations, baptizing them in the name of the Father and of the Son and of the Holy Spirit, teaching them to observe all things that I have commanded you; and lo, I am with you always, even to the end of the age.” Matthew 28:19, 20.

I kept this promise in my heart and God blessed His work. We met a 19-year-old youth named Roynel Gualde. He was very worldly. He loved music, played guitar, and had more than 500 songs memorized. But by God’s grace, he accepted Jesus as his personal Savior. Within a year he, too, began attending school at Mountain Heights. 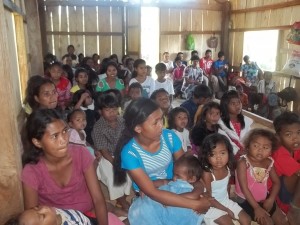 Listening intently to the gospel.

Before I graduated, my whole family accepted Jesus and was baptized. After graduation, God gave me another task to do. Bible workers Ting and Tem decided to assign me to the Kipolot church, a new church with only three members. So I went, along with my wife, who is expecting, and our one-year-old daughter. I worked full-time and the brethren supported us as much they were able, but sometimes I couldn’t give my child the food she needed. Since my wife was about to give birth, we decided to go back home and stay at my father-in-law’s house until after the baby arrived.

One day, I was very hungry because it was 10:00 am and we had had no food for breakfast. I went to work, cleaning up around the church grounds. While I labored, I prayed that our Lord would show mercy to us. Suddenly, Ting and Tem arrived, and after several minutes, Pastor Mike Bauler and his companions also appeared. He interviewed me, and afterwards he gave me 2000 pesos (about $45 US) and a sack of rice. “Call unto me, and I will answer thee, and shew thee great and mighty things, which thou knowest not.” Jeremiah 33:3. God showed me great things that I didn’t expect. Silently my tears fell from my eyes.

Many times I have asked the Lord for guidance: what shall I do to win souls for Christ? He has enlightened me and had me work in different ways. One time, I came in contact with a 13-year-old boy who had been taken to the doctor because he couldn’t sleep and had lost his appetite. They said he couldn’t be cured. I had a chance one day to show his father the power of God through medical missionary work. We met and I said: “Can I visit your home and see your child?” At first he was doubtful as he scanned my young frame from head to toe. But finally he accepted. I went to the home and gave the boy a steam bath and a massage. Then I returned to the parsonage. Just as God gave Elijah, Elisha, and the other prophets power, God put His power into my efforts. The next morning, the father came to the parsonage and said, “My child has asked for food to eat and he is back to normal!” Glory to God!

Currently, I am spending my life in the very fulfilling field of saving souls for Christ. Janly Hortillano, a student from Mountain Heights, is working with me. Sometimes it’s difficult to find money to support my family, but I always kneel down and ask God for His guidance. Today, there are 31 souls attending my church, coming from various backgrounds, including Catholic, born again, and back slidden Seventh-day Adventists. As always, our work here in Kipolot is assisted by Tem and Ting.

“In the feeding of the multitude and in the sermon on the bread from heaven, Christ had opened to them their work as His representatives. They were to give the bread of life to the people. He who had appointed their work, saw how often their faith would be tried. Often they would be thrown into unexpected positions, and would realize their human insufficiency. Souls that were hungering for the bread of life would come to them, and they would feel themselves to be destitute and helpless. They must receive spiritual food, or they would have nothing to impart…. But God delights to give. He is full of compassion, and He longs to grant the requests of those who come unto Him in faith. He gives to us that we may minister to others and thus become like Himself. Christ declares, ‘Ask, and it shall be given you; seek, and ye shall find; knock, and it shall be opened unto you. For every one that asketh receiveth; and he that seeketh findeth; and to him that knocketh it shall be opened.’ Matthew 7:7.” Christ Object Lessons, 140, 141.

Please include us in your prayers, that our Lord will give me more power and strength to continue the work of His vineyard. Maranatha!

By Junrald Agan, as told to Ting Palange. Support for the work in the Philippines can be sent to Mission Projects International, PO Box 59656, Renton, WA 98058.