A Modern School of the Prophets

At Santo’s Evangelistic Training Institute we have a deep and growing conviction to restore the science of True Education within Adventism.

“Every day, before work, our team spends a few minutes studying about True Education,” says Giancarlo De Miranda, the director of the institute. “We have a burden to equip our young people with tools to develop a symmetric character, a Christ-like character, and to enable them to become missionaries.” 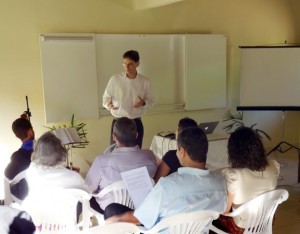 This is the ultimate aim of the institute, where we believe that if the Seventh-day Adventist people understood how important it is to have schools molded after the old schools of the prophets, more of them would be established all around the world.

Christian education has always played a major role in God’s plan for His people and in every movement of true revival and reformation. Revival and reformation is exactly what God is asking of His people today! In the days of the prophet Samuel, moral corruption prevailed among Israel, and he desired to do something to reverse it. With this purpose in mind, he established the schools of the prophets.

“These schools were intended to serve as a barrier against the wide-spreading corruption, to provide for the mental and spiritual welfare of the youth, and to promote the prosperity of the nation by furnishing it with men qualified to act in the fear of God as leaders and counselors. To this end, Samuel gathered companies of young men who were pious, intelligent, and studious.“ Education, 46.

We have been very busy at the institute and work is advancing quickly. We were able to finish building the classroom and had an inaugural open house. After much team effort, including the help of volunteers from time to time, and overtime work, they successfully completed the task. The building also included space for a library and two bathrooms equipped for hydrotherapy treatments. 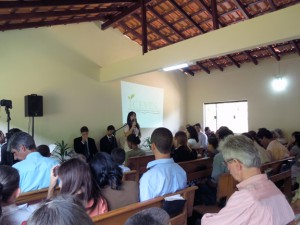 At the inauguration we held spiritual studies on the book of Nehemiah and on the topic of righteousness by faith. Giancarlo Miranda and Diego Silva were the speakers at the event. Some of the guests had the opportunity to express in testimony their gratitude to God in making Santo’s Institute a reality and for the blessing it has been to their families. It was a sunny and beautiful day, marked as a day of thanksgiving to God.

The next step was to bring students to the new school. During the inauguration, we advertised a short training program that would be held in about a month. The program offered a complete study, verse by verse, of the epistle of Hebrews and practical organic gardening classes.

At first, only a few students had registered for the course. But, as it is an old Brazilian custom, many waited until the last minute to apply, and the number of students grew to the point that applications had to be declined for lack of lodging. Because the dormitories are limited, even the houses of the staff members were used to accommodate the students. Although not all were comfortably accommodated, everyone was cheerful and eager to learn.

“I want to teach the book of Hebrews to my home church,” said student Maxwell Lima.

During the Hebrews’ class, the students were established in the sanctuary truth. All could have a personal conviction of the Bible-based foundation of the truths upheld by the Seventh-day Adventist church. 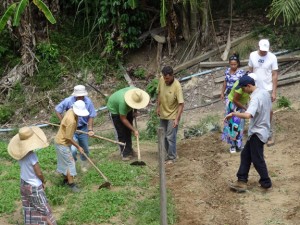 In the morning they learned gardening and in the afternoon they studied the sanctuary message. Brother Euzebio Mazoco, an agronomist, came to be a teacher and was in charge of teaching the students how to use the tools properly, prepare the soil, sow, clean crops, and fertilize them. The students learned how to plant beans, corn, beets, pineapples, eggplant, green peppers, and carrots. They contributed greatly to the attractiveness and the production of the school. Towards the end of the program, the students learned how to plant fruit trees using the “Angel’s Method of Planting.” It was not as easy as it looked on paper, but it does work! 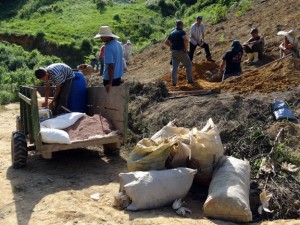 During the year, Santo’s Institute decided to expand their influence in the preaching of the gospel to other Brazilian states. We had been sending sermon CDs to the people in the state of Espirito Santo, but since January, 2013, we have uploaded the messages to our website, allowing people from around the entire country of Brazil to subscribe and listen—and they are. These messages contain important truths for the present time that have been left aside by the churches in Brazil and will help our people walk the narrow way.

In the meantime, school construction continues to move forward. The existing buildings are being converted to staff housing—since two families still live in the dormitories—and for additional school facilities. We need a school kitchen and cafeteria. As the institute has grown, we can no longer continue to use a home kitchen as we have been doing. The plan is to adapt the first floor of one of the school buildings and we estimate the cost to be $7,500 US Dollars.

“Before we can carry the message of present truth in all its fullness to other countries we must first break every yoke. We must come into the line of true education, walking in the wisdom of God, and not in the wisdom of the world. God calls from messengers who will be true reformers. We must educate, educate, to prepare a people who will understand the message, and then give the message to the world.” Review and Herald, February 6, 1908.