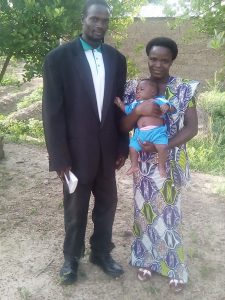 Sister Justine and her baby with Pastor Joel at Sanda District, North Togo

This quarter, we have put an emphasis on the distribution of pamphlets. As a result, many have begun studying the Bible. Among these, seven of the students regularly visit us. Sister Justine Pitho is one of these Bible students.

Sister Justine was five months pregnant when she received our message through the pamphlets. One day a few months later, a nurse called me asking me to come to the hospital to help Sister Justine.

When my wife and I arrived, we discovered that Sister Justine was in labor, but that she had become very tired and was having difficulty delivering the baby. The nurse asked us to take Sister Justine to the city of Kara, 40 kilometers away, where she could go to a big hospital and have a cesarean section. Before leaving, we prayed with Sister Justine. When we finished, Justine asked for a drink of hot water. Then we loaded her into the car.

As soon as we arrived in Kara, just outside the door of the hospital, Sister Justine gave birth without undergoing an operation! Now Sister Justine is preparing for baptism.

God works through His workers. Pray of our workers in the field. Thanks for supporting the workers in Africa!