A Salvation Army minister trusts God enough to sacrifice his income and possessions to become a Seventh-day Adventist.

From the time I gave my life to the Lord as an early teen, I knew God had a calling on my life. I had been raised in the Catholic faith, but at the beginning of my personal walk with the Lord I started attending Pentecostal churches. In answer to God’s call, I prepared for service by studying in Bible colleges and completing two separate diplomas in ministry. After graduation, I ministered in a variety of churches, officiating as children’s church leader, deacon and youth pastor. 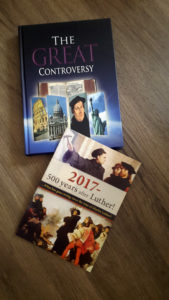 Over the years, I became more and more disillusioned with the watering down and twisting of the Scriptures to fit various new fads in the Pentecostal churches. I could see that the prosperity gospel, the over-exaggerated faith messages and the so-called moves of the Holy Spirit didn’t have any basis in the Word of God. Hence in 2009, I started attending services at the Salvation Army. The worship services there seemed more balanced than those I had experienced in the Pentecostal churches. After about three years of regular attendance I applied and was accepted for officer training to become an ordained minister in the Salvation Army.

I served as a Salvation Army officer until October 2016. I may never have left if God hadn’t intervened in my life! It started in June of that year, when I went on a weeklong vacation to Thailand. That one week in Thailand gave me a real burden for the Thai people, and I wondered what I could do to help them. Then, after I returned home, my mother contacted me and told me to watch Professor Walter Veith on Amazing Discoveries. That’s when my whole life started to be turned upside down!

Professor Veith’s teachings impressed me so much I could hardly stop listening to him. Familiar Scriptures suddenly became alive. Then someone gave me the pamphlet 2017 – 500 Years after Luther. After reading it, I sent off for a copy of The Great Controversy. As I learned more and more from the Scriptures, I became convinced that God wanted me to leave the Salvation Army.

Resigning from the Salvation Army tested my faith like nothing I’d ever been through before. The Salvation Army not only employed me—they also provided me with a home, a car, furniture and appliances. Leaving meant losing my income plus all the benefits. Yet I knew that God would look after me if I was faithful to Him, and so I resigned.

My mother graciously took me in when I became homeless and unemployed. While in her home, I joined the Seventh-day Adventist Church. As I sought God’s will in regards to work, I discovered an opportunity to go to Thailand as an English teacher. I had no commitments to keep me in Australia, and God opened the way for me to go and serve. My mission is to preach and teach the Word of God by establishing relationships with my fellow teachers, my students and the community where I will be placed.

In the dramatic year just passed, I have been stripped of all the things that gave me security and comfort. Now I have nothing but my faith and my God—and it’s wonderful. I am so grateful for God and for what He is doing in my life, and I am excited to see what He will do for me in the coming months and years. I pray that in Thailand, my faith will continue to grow and that I will have many opportunities to spread the gospel!

Stefan Cop is a new Adventist who has recently become an English teacher in Thailand.

Pray for Stefan that his walk with God will stay strong, and that he can be a living witness to the people he interacts with in Thailand.

Contribute to television ministries such as the one that first reached Stefan with the Seventh-day Adventist message. If such stations are available on your local networks, tell your neighbors about them!

Distribute present-truth literature as opportunity arises. You never know who may be an avid seeker, like Stefan!