Over 79% of homes in the United Kingdom have been offered a free Great Controversy!

More than 20 years ago a 16-year-old boy set out with a far-reaching plan: to offer a free copy of The Great Controversy to everyone in the United Kingdom. Jonathan printed up leaflets offering the book, and he and his friends and family started delivering them by hand. Then they started sending out the leaflets by bulk mail—a few thousand at a time. The momentum grew, and today Advent Books has reached over 79% of the homes in the United Kingdom with the flyers. Even better, 31,000 hungry souls have received The Great Controversy, and 15,600 people have requested correspondence Bible lessons! 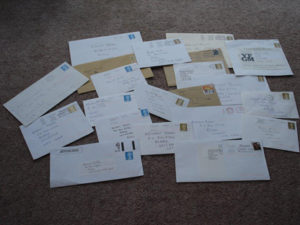 From that small beginning have come more small beginnings as people touched by the book become eager to share it. Back in April 2012, we received a request for The Great Controversy from a man named Paul. After reading the book, he wrote to us:

“Thank you for your book. A lot of the things told by Ellen White were very much on my mind. In fact, it hit the nail right on the head. . . . I think millions and millions are looking to the sky and praying for Jesus to come.” He then asked for more books by Ellen White, which we sent: first The Ministry of Healing, then Patriarchs and Prophets, next Steps to Christ and finally the Testimonies.

Paul loved reading the books, and every month he would send a letter telling us how he was doing. We praised the Lord for his response, but the most exciting part came when he started to request copies of The Great Controversy to give away. He kept asking for more, in quantities of 20 to 25, as he said people were eager to receive the books! “When I go out, people seem to like to have both the Remember cards* and The Great Controversy. I say to them, ‘Would you like the book to go with the Remember card?’ and they say, ‘Yes.’ It seems some in my district are becoming aware of things that are happening in the world.” 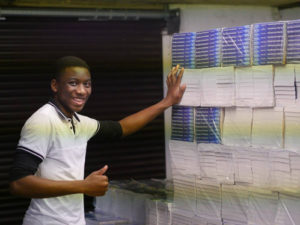 Paul’s latest letter bubbled with an exciting update: “Good news! I am now a Seventh-day Adventist.” Quitting the Church of England, he had gotten in touch with the pastor of his local Seventh-day Adventist Church. Please pray that God will continue to help Paul on his journey into the truth!

Another partner helping disperse the books is Gran. Gran is nearly 92 years old, and like Paul, she takes every opportunity to give away The Great Controversy. Recently, she had a handyman come to help her with some manual work. When he had completed the job and was sitting down to his paperwork, Gran told him she would like to give him a book.

“No,” Gran replied as she gave him The Great Controversy.

The man opened the book and read a little inside. Then he looked up at Gran and said, “Is it Adventist?”

A little surprised, Gran managed to affirm his guess. 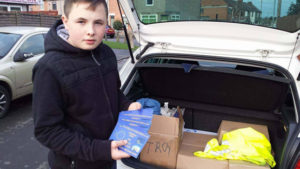 Stocked with free book cards and ready to share!

“I have a friend who is an Adventist,” the man shared. “He keeps me informed as to what is going on in the world.”

Gran smiled. “Read the book from beginning to end, and you’ll understand more about that!” After they had talked some more, the handyman said he would enjoy reading the book.

Why not keep some books, tracts or cards advertising The Great Controversy in your bag or in your vehicle? Even small beginnings can bring great rewards. Who knows? The books you give away may produce a harvest of people like Paul—people who are on fire to spread the news that Jesus is coming back soon!

* Cards advertising a series of Bible lessons on the Sabbath. 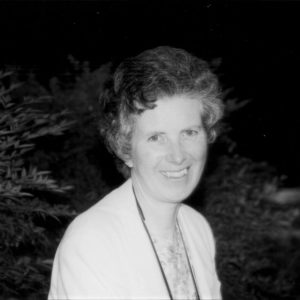 As mailing coordinator for Advent Books, Sue ensures the prompt delivery of Great Controversy books and other books requested. She also keeps detailed records of the progress of mailings made across the United Kingdom.

• Keep witnessing materials with you.

• When conversing with people, pray for opportunities to share.

• Seize those prayed-for opportunities to hand out literature.

• When you arrive places early, or in between errands, use your extra time to go door to door with tracts.

“The record of wasted moments and unimproved opportunities must be met when the judgment shall sit and the books shall be opened” (Testimonies, vol. 4, 453). What better use of precious time than to share literature containing the Three Angels’ Messages?