Life Given and Life Changed

Story 1: Dare I Call Myself a Missionary?

Adventist Southeast Asia Project (ASAP) Ministries supports work in four countries that score among the top 30 nations that persecute Christians (World Watch List). In one of these countries it is illegal to own a Bible or to evangelize in any way. Listen to Missionary Tom’s* heart as he writes this true and painful experience:

One day, a woman with whom I had studied the Bible came to say goodbye to me.

“I know,” I responded, emotion in my voice.

“There is a Bible in my backpack.”

I am quiet. What can I say to someone who is willing to share about God even if it might take her life? When my words come they are quiet, like I’m not supposed to say this. “You know what will happen to you if you are caught.”

Once again, I can’t find anything to say to her. Streams of tears falls down our cheeks. We begin to pray. My mind is confused. There is only one thing I know for sure at this moment. This may be the last time I ever see her. We both know, but we don’t talk about it.

“Please keep me in your prayers.”

I promise I will. And then she leaves.

Not very long had passed and word of her came to me. She had indeed been caught with her Bible. They persecuted her severely. What all they did, I do not know. I do know that they told her she would be released if she revealed who gave the Bible to her. Now she was the one who didn’t say anything. She suffered in silence until she paid with her life.

But I believe that she was the one worthy to be called a missionary.

Story 2: My Name is Abundance

A Cambodian lady turned the meatballs over and over on her little portable charcoal pit. She had done those movements so many times she could do it in her sleep. But her mind was not turning meatballs. Her mind was turning over and over her worries about her youngest son, Vibol. 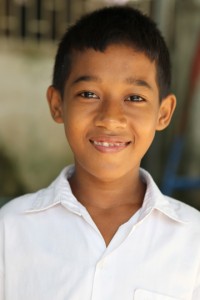 Why had she named him Vibol? Every time someone said Vibol it felt like they were mocking her. Vibol means abundance. “Abundance, abundance,” she mused. “That’s what I had hoped he could have. Our lives are anything but abundance. My husband’s an alcoholic. I can hardly remember when he last had a job. And these meatballs, they make me just enough to buy some rice and keep us in our hut.”

She worried most about Vibol because he was the youngest of her two boys and the naughtiest. The neighbors said he was running around with a local gang. She hoped it was not true. All she knew was that she could never get him to do anything at home. He would not help her form the meatballs or roast them. He would not sweep the dirt floor or wash clothes. He was always running out the door to play games with his friends or maybe worse. “I guess with a dad like his I can hardly expect better. I just wish he could go to school. Maybe some day, if I can save enough.”

One day Vibol wandered by a small building with a tall sheet metal wall. He heard children laughing and playing inside. “That sounds fun,” he thought. “I wonder if I can go in?” He peeked through the door. All the children inside were wearing crisp red and white uniforms. That was different from what he had seen at the government schools. They were blue and white.

A guard asked him what he wanted. He pulled back, afraid. The guard smiled. He could tell Vibol was poor and not likely in school. “Would you like to go to school like these children?” Vibol was too surprised to answer. He finally nodded his head. The kind guard brought him to the head teacher. She told him about the school and the best part—that it was free. Then he saw the kids lining up for lunch. They got food, too. Before he knew it the teacher was walking him to his home to talk with his mother. 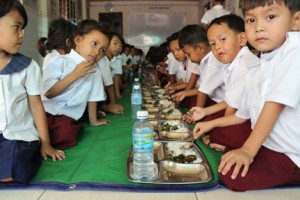 Vibol’s mother was overjoyed when the teacher offered to register him for school. Was this really happening? A private school offering free education for her son? The next morning Vibol woke up early. He put on the uniform the teacher had given him. The shirt was so white! The red shorts fit him perfectly. He went off to the school, excited for his first day. Everything went well. The teachers spoke kindly to him. The games were lively and fun. Vibol hardly noticed that he was way behind in school for his age. Other kids were, too. Many of them had come from a similar background of poverty and hardship. They were eager to learn, just like him.

Vibol went day after day and learned more and more. The teachers did not just teach him to read, write, and calculate. They taught him from the Bible, too. He liked the stories. He liked Jesus.

It was not long before his mother noticed the difference. “Mom, can I help you roast the meatballs? You look tired Mom. Take a rest while I sweep up.” Even the neighbors noticed. Vibol was changing. He loves to hear stories about Jesus and the miracles He performed. Every Sabbath he is at the nearby church singing and participating in the lesson. Life is so much better now.

His mom thinks she chose the right name for her son after all. “He’s learning so much. We may not ever have lots of money, but we have lots of love.” Vibol! Abundance!

Vibol is one of about 100 students at the Cambodia Feed and Read school which ASAP Ministries sponsors in Phnom Penh City. You can sponsor a child for just $20 a month. Please join ASAP Ministries with your prayers for the persecuted and for our schools, and with your gifts to help them press forward in the face of great trials.