Marques de Sousa’s life of crimes began when he was just a boy. At age 11, while living in Rio de Janeiro, he worked as a “jet”—someone who delivers drugs back and forth to dealers. By 12 he had his first gun and began working on his own crimes: robbing and dealing drugs. By 16 he relocated to São Paulo where he formed drug dealing and robbery gangs. He was arrested a few times and lived on the streets quite often.

By 21 he had his first important contact with the gospel in prison, but he did not pay too much attention to it. But when he went back out into the streets he saw the reality of the life he had chosen. His companions were dying young, being killed because of crime. He made up his mind to leave the criminal world and surrendered himself to Christ. In 1986, he was baptized at Deus é Amor (God is Love), one of the biggest Pentecostal churches in Brazil. He became a missionary for this denomination and made many trips to Africa through this church. Later on, he became a pastor. For 11 years he worked for the ministry of Deus é Amor, but then, for personal reasons, he left it. After that, Pastor Marques founded and directed a church named Avivamento do Espírito Santo (Holy Spirit Revival) with its headquarters in Africa and a subsidiary in Brazil. His church was based upon the same foundational doctrines as the Pentecostal church, including the doctrines of immortality of the soul, speaking in tongues, and eternal torment. 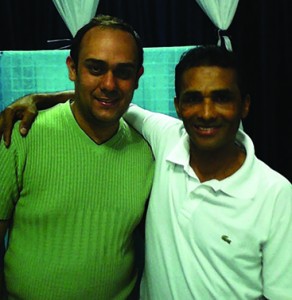 The author (left) with Pastor Marques.

A few years passed, and then in 2011 he came in contact with the Seventh-day Adventist church through TV Novo Tempo (Hope Channel TV) in Brazil, while in search of additional knowledge from the Word of God. He began by watching the Bible studies taught by Seventh-day Adventist pastors, but Pastor Marques did not want to know about the Sabbath issue because he believed that this commandment was abolished when Christ died on the cross. He was interested in learning about the prophecies in Daniel and Revelation. He began using that knowledge in his preaching and in Bible studies with others. But most of the time, when topics like the Sabbath or the death of the soul came up, he would skip them. Nevertheless, as he continued to study the prophecies, he felt an increasing desire to learn more. When he wasn’t able to watch the Bible studies on television, he would record them and watch them later when he had a Bible handy and could take notes.

After many studies, he realized he no longer believed in what he used to. He no longer preached on topics that he had in the past. He came to understand that the Sabbath was not abolished and he began keeping it. Around this time, he met a young man named Aquiris Kamar and his wife Thamara Rodriges. They were missionary students from Instituto de Educação e Saúde de Taquara (Health and Teaching Institute in Taquara, Brazil). This couple gave Bible studies to him and his church. He began attending the Seventh-day Adventist church from time to time.

In 2013 he learned about a radio program called A Verdade Para o Tempo do Fim (The Truth for the Time of the End), aired by Musical FM in São Paulo every Sunday afternoon. Even when he was working, Pastor Marques would not miss the program. He contacted the radio ministry and asked for study material in DVD and CD form, from the project Clamor da Última Hora (Last Hour Cry), which has given away millions of these materials to the listeners of their radio program. One of these materials was a study called “Discoveries on Prophecies” by Mark Finley. He also read others on health topics.

Announcement of the radio program and hours.

After having watched and listened to the entire series on prophecies, he presented this material to his church, Avivamento do Espírito Santo. His members became confused because they saw that these studies were different than what they had been taught and believed. Many questions came up in regards to these new doctrines, so Pastor Marques began holding Bible studies to explain the doctrines and clear up the doubts of his church. They studied the sanctuary, the books of Daniel and Revelation, the baptism of the Holy Spirit, the real gift of tongues, the mortality of the soul, the final judgment, and the second coming of Jesus. But inside the church grew a movement against the Sabbath issue and about 60% of his members left and joined other Pentecostal churches. The rest stayed, both out of respect and in curiosity. They wanted to learn more about these new doctrines. 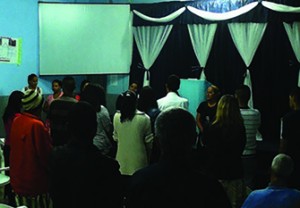 The church attending a Bible study about the Adventist message.

Today, there are still some who have trouble with the Sabbath issue. However, all the members were given study materials about these doctrines and on Saturday mornings they gathered to study the Ten Commandments. Many have come to understand and keep the Sabbath. Some still do not, but they believe that the Sabbath is the Lord’s Day and that it was not abolished on the cross. Some of the members who had left came back when they realized that there was no other place where they could learn truth from the Word of God, than in this humble church.

The A Verdade para o Tempo do Fim ministry has made a commitment to help them with study materials and also help Pastor Marques in the ministry of the Word of God to his church and through outreach seminars, so that the members and others may come to understand the truth of the Adventist movement more clearly. It is Pastor Marques’ desire that God keeps working in his heart, in his church members’ hearts, and in other ministries, so that they can come to know these truths.

“We must never forget how hard it is to remove long-cherished errors from the minds of men, which have been taught from childhood. We must bear in mind that earth is not heaven, and that there will be discouragements to meet and to overcome, but forbearance and tenderness and pity should be exercised toward all who are in darkness. If we bring them to see the light, it will not be solely by arguments, it must be by the work of the grace of Christ on your own hearts, revealed in your own characters with firmness, yet with the meekness and simplicity of Christ. Through much prayer you must labor for souls, for this is the only method by which you can reach hearts. It is not your work, but the work of Christ who is by your side, that impresses hearts.” Evangelism, 341.