After much work and expense in order to get the Internet system working in the new radio station’s site, the next step was to put our radio signal on the web. Although we found many people that claimed they could do a good job, we had had several unpleasant experiences with them because they charged half the money in advance and then didn’t finish the job. We prayed a lot about this and asked the Lord to guide us to the right person or company because we knew we had to invest money donated by people who made big sacrifices to send these funds for the Lord’s work, and so we wanted to be very careful.

One day, Brother Wagner told me that a brother in Christ from San Pedro Sula (the industrial capital of Honduras) was going to come to see the radio station and advise us regarding this project. When Brother Jordan came, he asked us some questions about our Internet connection and he started working on the equipment. A while later, he said, “Here it is. The radio is now on the web.” What a joy! I didn’t even know he was going to do the work, but there it was, the radio station’s signal on the web. The only thing we had left to do was purchase the host, and thanks to God we found it at a very low price. But there was something going around my head. “Well, this man, a professional, the owner of a company, who has traveled almost four hours from San Pedro Sula—he will charge us a lot of money for this job.” But before I could ask him how much he would charge, he told me he had done the work for free, for it was his thank offering to the Lord!

Now our radio station’s programming is also on the web at radioredecion.info from 5:00 am to 9:00 pm, with completely Christian programming, including carefully chosen sacred music, three live broadcasts during the day, and the rebroadcast of the program “Clinica Abierta” (Open Clinic) from Puerto Rico, a program that has a lot of acceptance among our listeners.

As you can see, the Lord has answered many prayers and it seems like we are now in a better position to carry this work forward. However, over the years and especially the last months, we have been receiving fewer and fewer donations for the radio station. Recently, the people from Spanish Herald in the US who have been doing fundraising for the station told us they were borrowing money to send to us for the station’s expenses. They did it for this month’s expenses, too, but told us they couldn’t continue, so we have to get ready for what’s coming. Please send prayers for our radio program, that we will continue to broadcast the gospel to thirsty listeners, according to God’s will. 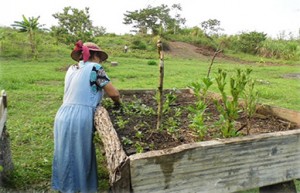 Sister Agripina labors in a raised bed of vegetables.

Sister Agripina has always had a big love for plants and the desire to grow our own food organically. So, ever since she moved to Belaire (the new radio station’s site), she started to plant with all her might. A while later, thanks to God, she was joined by Orlin Linares, a young volunteer who also loves agriculture. Very soon they were making high wooden planting boxes.

The reason why Sister Agripina needs high wooden boxes is because she has osteoporosis and an almost permanent pain in her spine. But that doesn’t stop her from going every morning and every evening to take care of her plants. We already had an abundant harvest of cucumbers and peppers, and are presently growing lettuce, mustard greens, green beans, papayas, and passion fruit. 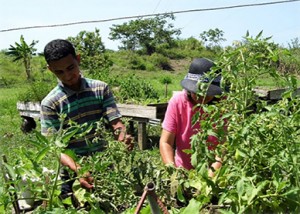 Orlin and Agripina tend the plants

During the Missionary Training Camp in Pinalejo, we had the joy of meeting Brother Enrique Betancourt, who has much experience in the field of agriculture. During that time, I asked him to visit us for a few days so he could see the land we have and give us some advice in order to use it better. We had Brother Betancourt with us for a weekend, and on Sunday he gave a special class to which some young people from the village attended.

Before he left, Brother Betancourt asked if he could take Orlin with him to help with agriculture work at the Adventist Educational Center. Orlin would have the wonderful opportunity to learn organic agriculture. So the next day, Orlin went with him. We miss him a lot, but we are happy because he has entered this important field of education.

The Missionary Training Camp was a success in the hearts of most of those that attended. People that had not been able to attend would ask when we would do another one because they wanted to learn, too. I began thinking about doing another, but I couldn’t find a good place to do it. Then I talked to someone who had attended camp and said, “You see, there’s not a good place to do it.” He looked at me with surprise and asked, “What about right here? What else do you want?” He was referring to the radio station’s property. I looked around and started to think. It’s not that big, but it has many advantages: a big kitchen, electricity, water in abundance, quietness, easy access, it’s a nice place, and we don’t have to borrow anybody’s land. So as we started to plan, the first thing we thought of was: where are we going to hold the meetings? In fact, this has been a problem for a long time. We haven’t been able to do evangelistic meetings or big meetings because we didn’t have a place for it. We had thought we should build something before, but we didn’t have the money to do it. Besides purchasing the expensive building materials, construction labor is very expensive. We thought we should at least build a roof, but even then, we didn’t have the money. 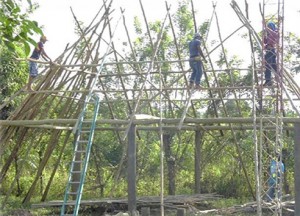 Wilmer and crew build the roof of the meeting building.

One day I talked about this with my sister, Karla, and she told me, “Maybe my husband Wilmer can do it. He is going to do a big project nearby and there’s always material left over. Besides that, he wouldn’t charge you anything for this job, and he also tells his workers that when we are doing work for God they should charge less.” So we accepted the offer! In only five days the cabin was finished. The thatch roof will last for 10 years and it’s so pleasant to meet under it. We still have to build the walls and the floor, but we are already meeting here, knowing that in the same way God has helped us up until this point, He will provide in order to finish this work. The Missionary Training Camp project keeps moving forward! Praise the Lord!