Today I am happy to say we opened a new school in Madhya Pradesh. We have called the school “Sanaan Loyal School” in honor of my three daughters: Salome, Naomi, and Annie. 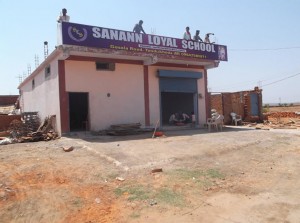 We have had a difficult time recruiting teachers to come to this remote location. But when Das and I went up to Madhya Pradesh last week for the opening, we brought with us two teachers from Andhra. We had a lot of fun with them. It was like taking them to a different country, even though it was only a different state. They had never been on a 20 hour train ride, and kept asking, “When will we get there?” Then once we reached Jabalpur they thought we had arrived, only to be disappointed to find out we still had another 50 kilometers to go by bus. So they said, “That should take about an hour, right?” Wrong, I said, due to the road conditions it takes two hours. We bumped and bounced along the road to Tendukheda. 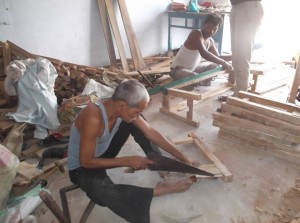 A carpenter at work on school benches.

When we finally arrived, it was late and there were no open hotels or restaurants. We managed to cook some rice which was the last rice meal they had for a number of days. It was so much fun to see them try to adjust to eating chapattis twice a day. They did the best they could to try to like it, but nothing could hide the expression of disappointment when the food was brought to them, and it wasn’t rice.

The heat, however, was intolerable. Every house is like an oven by evening. Our poor teachers tried sleeping on the roof of the room where they were staying, but the cement of the roof radiated heat like an oven. To sit with your feet on the cement felt like taking a hot foot bath. And sleeping on it? Impossible. They suffered a lot because of the heat. We have made arrangements so they can stay in the school for now, where it is a little bit cooler. But still we need a water cooler (swamp cooler) for them to survive properly. 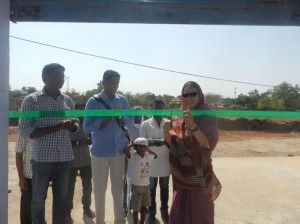 Going to church on Sabbath was a wonderful experience. It was like a pilgrimage. First we started from Tendukheda by bus to Jabalpur. That was a two hour, dusty, bumpy, hot ride. Once we arrived at the bus station in Jabalpur we went by local bus across the city, then an auto rickshaw for another several kilometers. After that we walked up a long hill and down some streets to the church. All of this in 110° F heat.

We opened the school with a ribbon cutting ceremony on Sunday afternoon, attended by our friends and teachers from Tendukheda. We are excited because we expect many students to join in the next few weeks. We still have a lot of work to do—construction has to be finished, advertising done, books purchased—but by God’s grace it will happen. 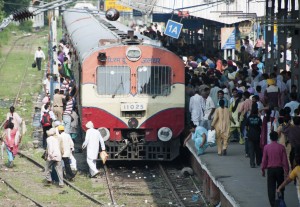 People are boarding in the train, India.

After opening the school in Madhya Pradesh, I, with Das’ guidance, began the journey by train to Mumbai where I would catch my flight to the United States. We had unconfirmed train tickets for sleeper class, which means we were put on the waiting list and we didn’t actually have seats. Neither did more than half of the rest of the people on the train, as we found out! We managed to squeeze our way onto the train when it arrived at the station, with three pieces of luggage, which we set in the crowded aisle. There was nowhere to sit except in the aisle with the luggage. It was 10:30 pm and I was very tired. Das pulled out a sheet he had brought for me, and after putting that on the floor I managed to find a way to lay down. It was a bit challenging to sleep, as the legs of the guy above me kept hitting my head. I couldn’t stretch out my legs because there was no space next to the person below me, and I had to be careful not to bump the person sleeping behind me. There were a couple of small spots of floor still visible, but these were reserved for people going to and from the bathroom during the night. I got stepped on occasionally, which was only made more unpleasant when I thought about where they just came from—the bathroom where the floor was covered with urine, and sometimes worse.

By morning I was sleeping nicely, but Das made me get up because people from the upper bunks were throwing their breakfast trash down on me. Reluctantly I got up. I was still so tired. I think I slept standing up for a while. Sometimes I would get a few inches of seat to put my backside on, and rest my head in my hands and catch a few more minutes of sleep, until I had to move for passersby or the rocking of the train got me off balance. When some people left the train, we got an upper bunk, where Das was able to sleep for a while, and I sat cross-legged and managed to catch some more sleep. Of course, it was burning hot up there. Even the fan felt like it was a hair dryer. I’m sure the temperature reached 115° F.

People’s tempers were not much cooler, and I admit, I struggled a bit with my own. I’d be standing in the aisle, trying not to bump the guy behind me, or the one beside me, or the lady in the seat next to me, trying to find a place to put my hand on the seat above me to keep my balance, and the guy who was sleeping on the seat above me would move his feet and knock my hand off. I would try for another seat to hold on, but there was nowhere to put my hand except for under someone, and that wasn’t an option. Consequently, I had to stand there and balance, but it is almost impossible to sleep like that. I don’t recommend it!

What made matters worse was there was a lady and her children who did have seats, and they wouldn’t share them with anyone. So one of the children would be on a bunk all by themselves, and everyone else crammed into the aisle, and no one was offered rest on the child’s seat, even for a few minutes.

“Dear God, please give me grace, the grace to stand a little longer, or to find some way to sit on my suitcase on the floor and get my knees out of the way enough to let someone pass in the aisle, or something!” Now I can understand something of the way the Jews felt being transported in railway cars, crammed together, during World War II. The major difference is that for the Jews, it was involuntary, but for me, it was voluntary, although I’m not sure why. Oh, and did I mention that the ride was 20 hours long?

After getting down off the train in Mumbai we headed to the airport. Once in the airport everything was different. Air Conditioning! Food! Water! Any time you wanted it! No one crowding or pushing you out of your seat! You have a seat you can call your own! And best of all, from the moment I got on the airplane: sleep, lovely sleep.

Now I’m safely in the United States and am still marveling at the cool fresh air, the green grass and trees, the fact that I don’t have to sweat, unless I want to. Quiet. Organized traffic. No blaring loudspeakers, horns, or temple prayers. Food of so many varieties. What do you do with it all? Then people ask me, “So, how was the flight?” I still haven’t figured out how to answer that question.

“Christ laid aside His glory and came to this earth to suffer for sinners. If we meet with hardships in our work, let us look to Him who is the Author and Finisher of our faith. Then we shall not fail nor be discouraged. We shall endure hardness as good soldiers of Jesus Christ.” The Colporteur Evangelist, 84.