“Three months: go and preach the gospel!” Such was my welcome from the immigration officer as she stamped a visa into my passport, knowing that the purpose of my visit was mission work. I was actually not going to stay three months, but rather about three weeks in the country of Kenya. I was met at the airport by Kimani Mbogo, a former student from our gospel medical missionary training program at Stenshult. After a day of resting we traveled about four hours to a youth camp that he had arranged. On Thursday evening, Friday and Sabbath, I shared God’s word to eager listeners. The young people thoroughly enjoyed singing, and there were many special songs. The church building had a dirt/gravel floor with simple wooden benches. The rainfall upon the tin roof made it difficult to hear during Sabbath afternoon. I was impressed with the simplicity of the worship and the fact that nearly all contributed to the service. We were a day’s journey by foot from Mt. Kenya, Kenya’s highest point. In the morning it was possible to see the mountain and the snow upon it, which remains all year. At night I slept with two blankets.

Just after the Sabbath finished, we traveled by car and bus back to Nairobi, where I was to meet a night bus at 10:30 pm. I chose not to travel upon the Sabbath, knowing almost certainly that we would be late for the bus. God rewarded my faith and fidelity and held the bus, until about five minutes after 11:00 pm, when we arrived. Now, I was on the way to Mombasa to visit Emmanuel Kaingu. I had first met Emmanuel several years earlier in Mittelsinn, Germany. In Mombasa, I was met by other young people who were on their way to Shimba Hills, where Bethesda International is located. It is about two hours inland from Mombasa, a major city on the coast. Emmanuel, originally from Kenya, decided to move back to his home country and establish a ministry for serving God there. After purchasing a large piece of property, he built several buildings. The ministry has started a health center, a training school and a farm. The health center serves the community and has guests from other parts of the country. I was able to meet two of the three pioneer students from the first school year and some of the students for this coming year. Part of the land has been planted with cassava, bell peppers, carrots, kale, potatoes, papaya, pineapple, bananas, mangoes, coconuts, and other fruits and vegetables. Here it was warm enough, so that I did not even sleep with even a bed sheet. 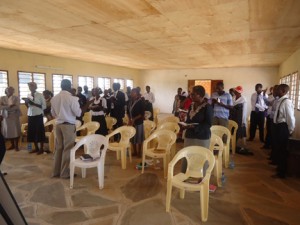 About twenty youth were gathered here for ten days to study the Word of God and fellowship in the truth. Many were the only Seventh-day Adventists in their families. I was quickly impressed with the knowledge and zeal that these young people had. They were hungering for truth. Our topic for this youth meeting was “True Education.” We had a wonderful time tracing false education down through the ages—through Egypt, Babylon, Greece, Rome, the Papacy—and into our modern times. By the end we realized that all the countries of the world are following this false system. More than that, we saw God’s plan of true education based in the Bible and Spirit of Prophecy. Some of the young people are beginning to leave the universities and their secular work to take up the Gospel medical missionary work. God is preparing an army of youth rightly trained.

While most participants were from Kenya, there was also a brother from Uganda and participants from Nigeria. Daniel, from Uganda, explained that many of the Bibles that are being used, distributed, and sold in that country are called “The Good News Bible,” which is a paraphrase rather than a translation of the Bible. The young people in Kenya face many challenges, as they would anywhere. False education is worshiped, and it is hard for them to break away from the will of the parents and the village.

Daniel, one of the pioneer students, gave his testimony. He was studying in the university in Mombasa to become a chemical engineer. After his education, he would be able to secure a good-paying job working with his uncle. While studying, he became active in the campus ministry, as there are many Seventh-day Adventists in these universities. He became busier and busier in the Bible studies, and he started to neglect going to his classes. He began also to study the Spirit of Prophecy. He wondered, “Where is the manual labor? Where is the plan of true education? How can I follow this education and be a missionary, as all are called to be?” Finally, he told the school that he was leaving and entered Bethesda’s medical missionary course, choosing to lay aside a crown of promising worldly honor to bear a crown of thorns with Jesus.

His parents and home village had set high hopes on him and, needless to say, were disappointed. After or during his studies at Bethesda, Daniel had the opportunity to visit his home. A man was sick, and he longed to minister to him. He asked his mother to introduce him to the man, but she was not interested in doing that. Later, he went to his room and prayed. He found a promise from the Bible and claimed that, through faith, the Lord was going to heal him. Within a week of Daniel’s ministry through proper diet and lifestyle, herbs, and the love of Christ, the man recovered. Now, the people began to call him “doctor”! His father has given him a small piece of land in the village, and the people are eager for him to come to teach and work among them.

Nathanael, the other pioneer student whom I met, is another brother that the Lord has called to His work. Before Emmanuel had the property at Shimba Hills, the work took place near Mombasa. While returning to Germany upon one occasion, he left Nathanael in charge of the work. One day a lady of influence and wealth came to the house for help. The furniture was simple in the reception, having only benches in the room. He told her to wait while he finished attending to what he was doing. When he returned to consult with her, she asked him, “Which university did you attend?” He replied, “Mom, if you knew my marks in secondary school, you would not even have asked if I attended university!” (Nathanael had wasted his school time by abusing alcohol and drugs.) By faith in God’s promises, he counseled her. After the conversation, she thanked him, “This is the best advice I have ever received of anyone.” Nathanael’s vision is to start manufacturing health food and to eventually operate a healthy restaurant.

On my last Sabbath, I spoke all day in a small church in Nairobi to eager listeners. It is my prayer that they will also become eager doers. This is the great challenge for all of us: to become doers of all that we have heard and know. My visit to Kenya has opened my eyes to the church in Africa and its needs. I am thankful to the Lord for allowing me to be His ambassador of the gospel and for His protection throughout my journey. If you would like to know more about and support the work in Kenya, please contact me.

“Now, as never before, we need to understand the true science of education. If we fail to understand this, we shall never have a place in the kingdom of God.” Christian Educator, August 1, 1897.