“How beautiful upon the mountains are the feet of him that bringeth good tidings.” Isaiah 52:7.

Recently we (Nelson Koroi, David Kaura and Gideon) flew across to Popondetta.  We were met by Brother Nickson Ika and his cousin Francis Taimbari from Puri Village. We also met up with Brother Damien, a nephew of David Kaura. We took a hired vehicle from town heading north along the highway on our way to Puri. Along the way we were halted by a flooded river and there was quite a crowd waiting for the flood to subside.

Visiting with an interest in Bible truth.

All the bridges had been destroyed by the November 2007 disaster. This presented a wonderful occasion to share the magazines. A number of cartons and books were given out. The next stream was also flooded and we had to wait for David Kaura’s cousin, who was the chief mechanic for the palm oil company, to bring a frontend loader to clear away the steep side of the stream to enable the traffic to flow. We thanked him and we were on our way to Puri. We came to a halt at the end of the road and had to carry our luggage across streams and a deep chasm to the next village where we were to spend the night. It was about 8:00 pm when we arrived at Bati’s village. Damien then decided to move on and walked to Puri that night to inform the people of Puri that we were coming.

We stayed with Bati Porari, a former Provincial Government official, at Sasembeto village. On the first night of our study with him, Bati and his whole family were convicted and convinced of the Three Angels’ Message. He and his wife testified, “The gospel that you presented to me and my family was finally the truth we were looking for in different churches for so many years.”

The next day we left for Puri village, which is a threehour walk up in the mountains. As we approached the first village of Hopape we were halted by messengers who told us to wait without letting us know the reason for this delay. Meanwhile, in the village, preparations were made for a traditional welcome. Even Prime Minister Micheal Somare has not had a welcome of this kind before. The villagers had changed from Anglican to a new church called “The Church of the Nativity” and have embraced Feet cultural customs, traditions and primitive practices. A former Bishop of the Anglican Church led them astray to this new (old) religion. As we entered the village, we were met by a shower of shouts calling, “Orokaeva! Orokaeva! Orokaeva!” Everyone had put on their best traditional costumes and formed two lines between which we must pass. A welcome speech followed to which we replied in kind. At the next village, Koromutotumu, we receive another traditional welcome.

Finally we entered Puri Village where we would conduct the meetings. The village was situated on a ridge with a population of about two hundred people. Like other heathen villages, pigs of various colors and sizes were beyond number. The filth and squalor was indescribable. They truly need reformation.

As we entered the village, we were met by another group of Anglican youth from the coast. They had visited earlier and ran some religious programs and they were on the way out. But a thunderstorm intervened and we had to spend a little time in a shelter with this group of so-called miracle workers from the Anglican Church. The Lord had it all worked out though. Nelso Koroi began to relate his personal testimony of his conversion from the United Church, as a Sunday-keeper, a great smoker and an alcoholic to be a health reformer and Seventh-day Adventist. He talked about the many false and deceitful workers and false revivals, and those that are holding the truth in unrighteousness. What an impact this had on our companions, as they could see themselves in their true light. They were crestfallen and could not speak a word. They were amazed at the words spoken by the servants of the Most High God. 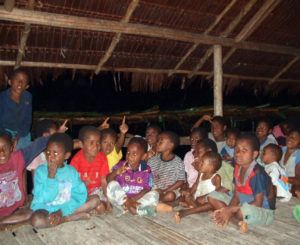 Some of the children who attended the meetings.

We shook hands and went up to the village only to be met by a chorus of school children and a crowd of people shouting their greeting. Again, we were greeted by another traditional welcome. We responded with a speech in which we told them that when the gospel of Christ is understood then there will be no place for pagan traditions.

In the evening a butterfly lamp was lighted, it illuminated the haus wind (a thatched roofed shelter with open sides) where we had the meeting and we had health reform messages and Bible studies for about two hours. It was nice and cool in the evening and the crowds filled the shelter. The next night we had the privilege of having a generator to run the Powerpoint projector. From then on the meetings ran full-scale with no withholding of the prophecies of Revelation. The people were captivated and engrossed by the messages. We continued for about a week, ending our meetings on Sunday. During the day we taught the people of the gospel order, how to keep the Sabbath, Christian standards, stewardship, the Three Angels’ Message and many other topics they requested and answered many questions. 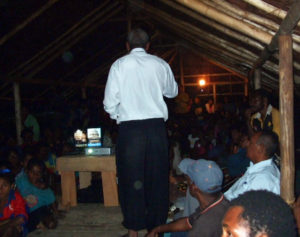 A Seventh-day Adventist elder walked from the village at the base of Mt. Lamington to attend the meetings. He had heard of the proposed meetings and determined to learn the truth himself. Amidst ridicule he and his wife walked for three hours to attend the meetings. In the absence of David Kaura, the elder acted as the interpreter when we encountered difficult passages of Scriptures. On Sabbath the couple became instrumental in the worship services and singing, bringing to life the knowledge of the Word of God to the people of Puri Village.

On Monday we started the descent, stopping at Bati’s village for a meeting. The people have of the village had been deceived regarding the Mark of the Beast and 666 and desired to know the truth. For two days we presented the answers to the vital questions of health, the prophecies of Daniel and Revelation and the plan of redemption. There are other issues which the people of Oro need to overcome. Superstition and cultic practices are deeply rooted in the minds and hearts of the people such that the glorious light of the gospel cannot enter easily. These and other things need to be cleared away before the truth will be accepted as truth. 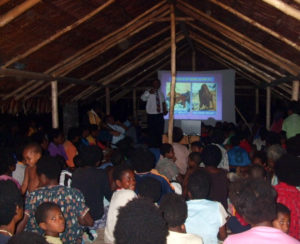 Preaching to a full crowd of eager listeners.

On Wednesday we walked to the main road and caught a ride to Popondetta where we spent a night with Francis. We ran a health program at night and flew the next day to Port Moresby.

For conclusion we can say with Paul “For I am not ashamed of the gospel of Christ for it is the power of God unto Salvation to everyone that believeth, to the Jews first and also to the Greeks.” It is by the grace of God that we can see people accepting the gospel and living the life of Christ. There is a power that comes and changes a person completely from a sinner to a saint, and that power is that of the Holy Spirit. We are glad that we can be part of the mission to finish the work of God in this little time before the close of human probation.