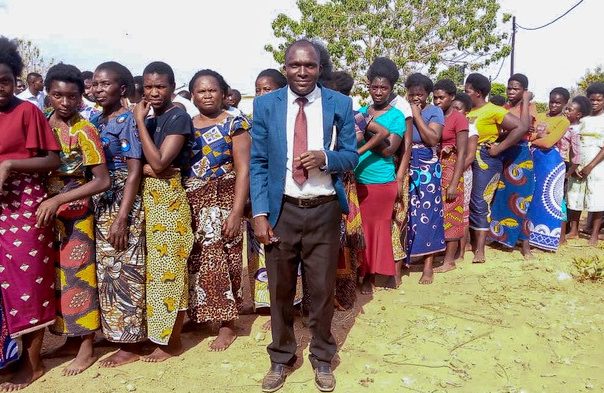 “I saw evil angels contending for souls, and angels of God resisting them. The conflict was severe. Evil angels were corrupting the atmosphere with their poisonous influence, and crowding about these souls to stupefy their sensibilities. Holy angels were anxiously watching and waiting to drive back Satan’s host.” Testimonies, vol. 1, 345.

The angels and the Holy Spirit have been at work in Zambia, pressing back Satan’s host. Pastor Hillary, faithful in his calling to preach the Three Angels’ Messages, is seeing the results of the Spirit’s work. This year, as he has spoken at several evangelistic meetings in his district, more than 300 people have given their hearts to Christ! A lady named Nchimunya Beene is a good example of the scores who have recently been converted.

In many rural areas of Africa, witch doctors control the minds of the masses through deception. Uneducated and superstitious people believe that the witch doctor has secret knowledge of the activities of the evil spirits, and that he has the ability to appease them.

This is the environment in Nchimunuya’s village, and just like everyone else, she was terrified of offending the spirits. If anything out of the ordinary happened, she believed the spirits were telling her they were angry and that she would need to make a trip to the witch doctor, with a gift, of course, to inquire what the omen meant. One day Nchimunuya came home to find a snake in her bed—a sign that she had angered the spirits. She persuaded the creature to leave her bedroom, only to have it return the next day and every day afterward for quite some time.

Nchimunuya heard about the meetings that Pastor Hillary was conducting in a village near where she lived. Thinking that she might find answers to the dilemma of the snake, she decided to go. As she attended the meetings, she became so interested in the Bible teachings that she all but forgot about her bedroom visitor. Near the end of the meetings, the Holy Spirit softened her heart and she surrendered her entire life into the hands of God. Upon returning home that night, she found her bed empty, and she never saw her evening visitor again! That convinced her even more that God is the Creator and the One who controls all His creatures. After going through a series of Bible studies, Nchimunuya decided to be baptized and join the Seventh-day Adventist church.

Today, Nchimunuya is the most active member in her church, working to turn people’s hearts from superstition and fear of the spirits to the living God who loves them. Through hearing her personal testimony, many people have becoming interested in the Bible. We plan to hold an evangelistic series in her village soon, with the goal of building a small church.

Please pray for Pastor Hillary and the other workers in Zambia. If you would like to help advance the work in this country, mark your donations “Zambia.”

Yours in moving the work forward!