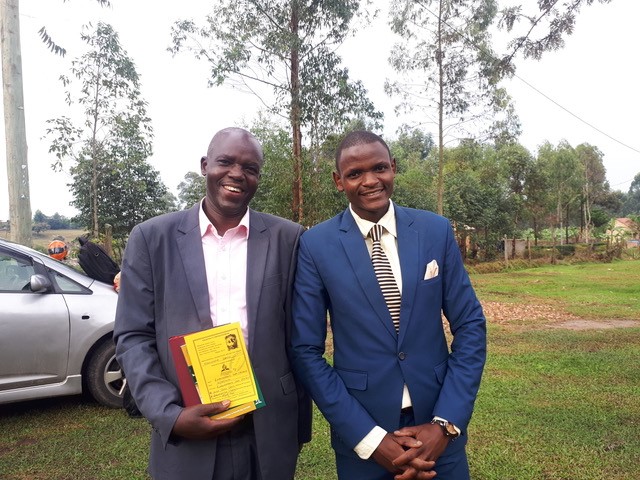 “This is a work that should be done. The end is near. Already much time has been lost, when these books should have been in circulation. Sell them far and near. Scatter them like the leaves of autumn. This work is to continue without the forbiddings of anyone. Souls are perishing out of Christ. Let them be warned of His soon appearing in the clouds of heaven.” Colporteur Ministry, 25.

Do you believe our publications still have an impact on people today? Are our books worth giving to people who do not know God?

Emmanuel, one of our Bible workers in Uganda, has been distributing hundreds of copies of the book Great Controversy. Although he rarely sees the results of his efforts, he nonetheless perseveres in his literature evangelism. Yet at times, God reveals that Emmanuel’s efforts are not without fruit.

One day Emmanuel came to the house of a man whom he recognized: a politician named David Kamukama. Mr. Kamukama told Emmanuel of his intentions of running for an important position in the government. Emmanuel didn’t argue with him about the dangers of taking such a course in life, but he invited the man to bow his head and commit his plan and ways to God. Then he left him with a copy of The Great Controversy.

When Emmanuel left, the Holy Spirit impressed Mr. Kamukama to start reading the book. Every night upon arriving home, he would pick up The Great Controversy and read it. He read and reread the book. When he finished, he went seeking Emmanuel. Finding him, he invited him to his house to conduct personal Bible studies with him.

Emmanuel took him through every point of the Three Angels’ Messages, allowing multiple texts of Scripture to explain every doctrine of the Bible. Mr. Kamukama was astonished at how the Bible interpreted itself! Mr. Kamukama knew about Seventh-day Adventists, but had always believed that they were a cult. On completing many Bible studies and asking scores of questions, he became convinced that this was the true church spoken of in Revelation 12:17.

Now he had a dilemma. He began to think that if he joined this relatively small, unrecognized organization, it might jeopardize his chances of being elected. Still, he felt deeply impressed that he should move forward and be baptized, leaving the consequences with the Lord.

After his baptism, Mr. Kamukama lost the election. Although disappointed, he came to believe that God was not calling him to be a politician, but rather an evangelist. Now Emmanuel and Mr. Kamukama have teamed up and started a church in his house. Dozens of people are coming to church every Sabbath because of the politician’s influence!

I could tell you many stories just like this about Bible workers distributing the book Great Controversy and, in time, a church group being started. We need more Bible workers and many more churches built to accommodate the growing number of believers! If you would like to help our Bible workers spread the Three Angels’ Messages in Western Uganda, please mark your gifts “Uganda Workers” or “Uganda Churches.”

Yours in spreading the glad tidings!