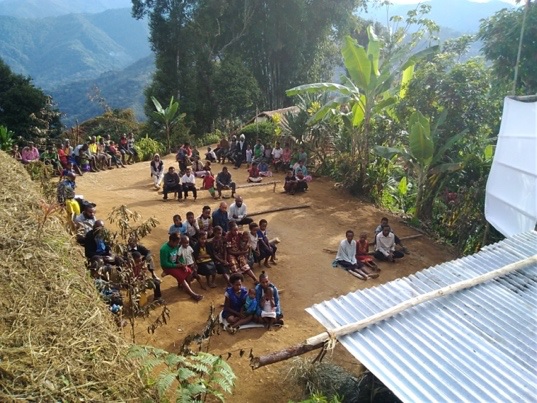 “The signs in the sun, moon, and stars have been fulfilled. Since that time earthquakes, tempests, tidal waves, pestilence, and famine have multiplied. The most awful destructions, by fire and flood, are following one another in quick succession. The terrible disasters that are taking place from week to week speak to us in earnest tones of warning, declaring that the end is near, that something great and decisive will soon of necessity take place.” Review and Herald, November 22, 1906.

In Papua New Guinea, as in many other places, public gatherings have been restricted because of the COVID-19 pandemic, but this has not slowed down Brother Moses Yauma, a lay worker in PNG. In the past, Moses did lots of street evangelism, with gatherings of 500-1,000 persons, but all that has changed now because of the pandemic. Moses has had to find other ways of reaching people with the gospel.

Instead of inviting people to gather in a public square and listen to the spoken Word, Moses has been taking the Word to them. He has been busy reaching families and individuals with the gospel in practical ways, taking seriously the Bible’s counsel in James 1:27 (NKJV): “Pure and undefiled religion before God and the Father is this: to visit orphans and widows in their trouble, and to keep oneself unspotted from the world.” By carrying clothes, soap, and other essential needs with him, Moses has been able to minister to people in practical ways, and this has opened doors for him to have personal Bible studies with dozens of families. Many people have responded to the kindness shown them and have given their hearts to Christ!

Recently, the PNG government has eased restrictions by allowing gatherings of less than one hundred persons. Brother Moses decided to begin taking the gospel to isolated villages high in the Bomai Jungle where gatherings would be smaller. With no roads to access these remote villages, he and his team had to walk ten hours to the first village, up and down steep mountain trails.

The meetings started with the everlasting gospel of the First Angel’s Message. When the appeal was made the first night, many showed a deep desire to follow Jesus and the truth. The challenging truths of the Three Angels’ Messages did not deter the people from coming to listen; in fact, the numbers continued to increase. By the end of the meetings, most of the people in the village were attending. When the testing truth of the Sabbath was presented in a clear and convincing manner, half of the village decided to take their stand for Christ—and they have followed through! The head elder of the church reports that half the village has come to church the last seven Sabbaths.

May we all have a sense of urgency in our hearts as we see the fast-fulfilling signs of Christ’s coming! If you would like to partner with us in sharing the Three Angels’ Messages in Papua New Guinea, mark your donation “PNG Evangelism.”