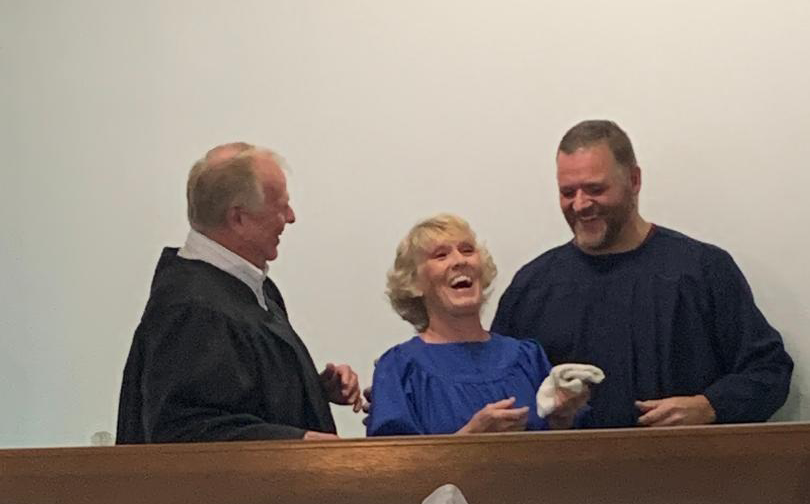 When Karole’s sister is diagnosed with cancer, Karole’s life begins to change.

Heaven and Earth rejoiced together on October 31, 2020, when my dear friend Karole surrendered her life to Christ in baptism. Members of five churches from three different states celebrated the event in our little church that Sabbath. Many, many prayers were answered that day.

Karole’s journey had begun six years earlier. Karole’s sister, Kathy, was a Seventh-day Adventist; but Karole, an active Methodist, wasn’t interested in the things that her sister tried to share. That began to change when Kathy was diagnosed with uterine cancer. Karole visited her often in southern Illinois and was impressed by the love and support that Kathy’s church gave to her. Kathy and her son had worked for 3ABN, so Karole toured the ministry during one of her visits. When Karole returned home to Iowa, she began studying the Bible study guides that she had been given at 3ABN. Then she started watching 3ABN on television. Soon afterward, Pastor Joe Arellano called and invited her to attend his church in Fort Madison, Iowa. One Sabbath a few weeks later, as Karole was watching 3ABN, she decided that she might as well be in church as watching church on television. She expected a large church that she could slip in and out of without notice—but found a small church that welcomed her warmly. Karole started going to church regularly.

I met Karole a few weeks later when I attended Pastor Joe’s prophecy seminar in Fort Madison. At the time, the Fort Madison church did not have a midweek Bible study, so I invited Karole to attend our study in Kahoka, Missouri. Karole loved the truths she was learning and was excited to share them with others. She reserved a room at the library in her town of Keokuk, Iowa, for Pastor Joe to present a weekly seminar on history and Bible prophecy. Several people came to the seminar, including the Adventist pastor from Quincy, Illinois. Karole began attending his church whenever she visited her daughter in Quincy. Pastor Tim became a mentor to Karole.

Friendly, enthusiastic Karole now had friends in several Adventist churches, and was always ready to help at any of them. Even better, Karole was continually thinking of ways to reach people for Jesus. She inspired us to start a nursing home ministry in Kahoka, Missouri, and before long the other two churches in Pastor Joe’s district had nursing home programs as well. Together, she and I started visiting inactive church members, and before the coronavirus restrictions interrupted things, we held monthly cooking classes in the Kahoka and Quincy churches. Currently, we are studying the Bible with one of Karole’s former co-workers.

I had been praying for years for a revival in our little church. I thought that we needed a young couple and someone to play the piano. God sent us Karole, who is not young and doesn’t play piano, but is someone He can use. I am so glad that He did. With all the ministries Karole became involved in even before her baptism, I am excited to see what else the Lord will do through her. The last baptism in our little church took place sixteen years ago, but I am sure there will be more before another sixteen years passes.

Sadly, Karole’s sister Kathy lost her battle with cancer before Karole even began attending the Adventist church. What a wonderful surprise awaits her on resurrection morning when she sees how the Lord answered her prayers!

Author
Beverly Francis lives in the Iowa countryside and loves to share her faith through friendship and health ministry. She also serves as proofreader for Mission Projects.

You Can, Too!
Karole’s story is one of answered prayers. Only God knows all the prayers that He answered in Karole’s baptism, but we know some of the people who offered them:

If your loved one still needs to come to the truth, keep praying—and keep sharing, even if it takes years.

Prayer—along with willing enthusiasm—is bringing revival to Karole’s church! If your church needs revival, don’t give up. God answers in His own way, and “God’s purposes know no haste and no delay.” The Desire of Ages, 32. Keep praying!