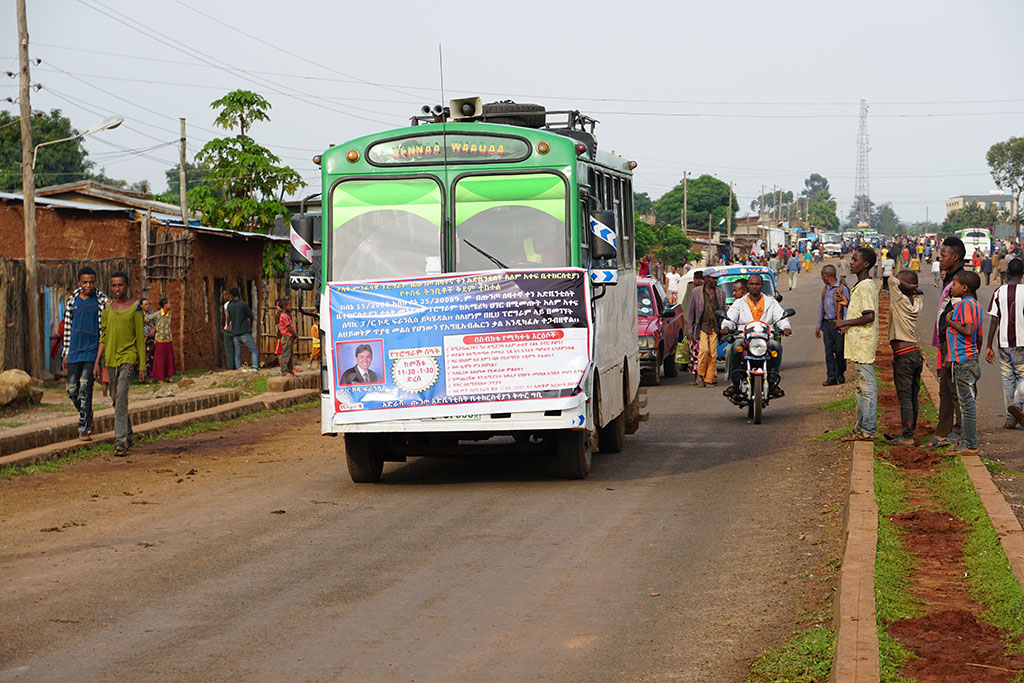 A Bible study on a bus results in a young army captain’s conversion.

As the tall young man entered the bus, I beckoned for him to sit next to me. “My name is Tesfaye,” I introduced myself.

He smiled. “I am Worku.” We had over 300 miles to travel before we would reach Addis Ababa—plenty of time to get acquainted. As we talked, Worku told me that he had been a captain in the Ethiopian Army for many years. “I came out of the fiery war with Eritrea alive by the mercy of God,” he said. “Now I am an elder in my Protestant church.”

“When did you become a Protestant?” I asked, surprised to meet someone of his age and influence who was not Muslim or Ethiopian Orthodox.

“I attended a Protestant school as a small child,” Worku shared. “At school, we studied the Bible. During the war, I often remembered God’s Word, and I prayed. Every time God protected me, my faith was strengthened. I joined a Protestant church when I returned home.”

Study the Bible with him, the Holy Spirit prompted. I pulled out my Bible and began to share, and we ended up studying for the rest of the trip. By the time we reached our destination, he was convinced of the Sabbath truth. I wanted to share prophecy with him, but I hadn’t brought any reference materials. I didn’t even have a phone number to give him when we said goodbye, but I expected to see him again somewhere in town. For months, however, I was not able to find him. I prayed for Worku often, fervently requesting to meet him again.

One day, a colleague and I were traveling from Addis Ababa to Bale Robe when our company’s vehicle broke down in a small town. It was towards evening—too late to have the car fixed—so we went looking for lodging. Suddenly I saw my friend Captain Worku on the street. Feeling as if I had found my own lost child, I hugged and kissed him.

He grinned at me. “Now I know why my bus broke down!”

I thanked God. Not only had He arranged for me and Captain Worku to cross paths, but He had reminded me to pack reference books on Daniel and Revelation in my travel bag!

Worku and I had dinner together, and decided to stay in the same hotel room. Late into the night, we studied the Three Angels’ Messages and the mark of the beast, topics we hadn’t been able to cover before. Finally, as we prayed together, Worku made his decision to accept the Sabbath and be baptized into the Seventh-day Adventist Church.

“Since you were already baptized by immersion, you could join by a profession of faith,” I told him.

He shook his head. “I need to be rebaptized, because I was baptized to obey only nine of the Ten Commandments.”

I kept in touch with Captain Worku after that. After sharing the new truth he had learned with his church, he resigned from his position and joined the nearest Seventh-day Adventist congregation. Soon after, when my job transferred me out of the region, Brother Worku took the leadership of that small church on my behalf.

I will always be thankful for the influence the Protestant school had on Brother Worku as a child. Christian education is a powerful tool to bring secular children to the Lord Jesus! In order to reach the children and parents in the Hadero area of Southern Ethiopia, we plan to build an Adventist school. Thank you for giving to help us reach many souls for Jesus!

How You Can Help
Pray for Tesfaye as he organizes the work in the southern part of Ethiopia.

Give. If you would like to help reach souls in Ethiopia, send your donations marked “Ethiopia Churches” or “Ethiopia Evangelism” to:

Translated by Daniel Shamebo Sabore, coordinator of Mission Projects International’s Ethiopian projects. He can be reached at 253-835-0107 or info@advancedtranslationservices.com.