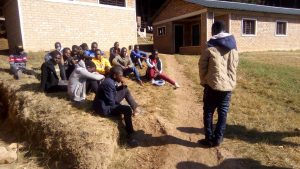 A group of boys search for answers when valuables go missing.

My husband Elisha and I returned from furlough in Europe to find the school campus in an upheaval. Money and watches belonging to the students had disappeared. Knives, bread and batteries from the school cafeteria were gone without a trace. Even the radio Elisha had placed out in the field to chase the monkeys away was missing.

We arrived just in time for the “icing” on the cake—the dean’s brand-new, expensive cell phone had been stolen. The boy’s dormitory became an upheaval of perplexity and frustration. “All the boys suspect each other of being the culprit,” a teacher told us. “There is no trust among them.”

We called a meeting and begged the thief to confess, even conducting a surprise search of the boys’ belongings—but found nothing. The clock was ticking: it was Tuesday, and in three days all students would return to their homes on school break. It would be very difficult to recover the stolen items at that point.

Sorely feeling the loss of their valuables, some of the boys decided to fast and pray all day on Wednesday. We gathered the students together and talked about the consequences of thievery. I personally asked each student about the stolen items, and gave the thief the option to discreetly return everything previously taken. But Thursday morning dawned, and nothing was returned. We earnestly prayed that the Lord would do something to dissuade our thief from his ways.

We decided to conduct one more search—this time, at the bus as students prepared to leave for break.  We searched and found the thief—with the dean’s expensive phone in his pocket, and Elisha’s monkey-chasing radio in his bag. It was Edgar.

At first, he denied stealing anything more than the phone and radio. But eventually, he confessed and all the stolen goods were recovered. We took the student aside, wanting to give him another chance. “We are forgiving you,” I said. “And you may continue your classes until the end of the year if you would like.”

Edgar looked miserable. I wished with all my heart that he would come back, but he never returned to our school after the break. We live in a culture of shame, and he did not want to face the students he had stolen from. “Oh, Lord, may you keep Your protective hand upon him until he gives his heart to You,” I prayed.

The rest of the students looked relieved as they reclaimed their stolen items and settled back into regular life again. In fact, I overheard them talking amongst themselves. “Now I know that there is a God in heaven Who answers prayers,” one said. “We were ready to turn to the witch doctor to find out who the thief was, but God intervened at the right time.”

As heartbreaking as the incident was, I could see how God answered the boys’ prayers—and showed our cell phone thief a glimpse of His great love and forgiveness.

Author
Nadege Vande Voort and her husband Elisha operate Eden Valley Foster Care Mission, a trade school for underprivileged youth in Tanzania. You can reach them by emailing harvester2188@gmail.com. Their address is Box 17, Mafinga, Iringa, Tanzania.

How You Can Help
Pray that Edgar would give his heart to Christ and return to learn more of Christ’s love and forgiveness.

Pray that God would use Elisha and Nadege as they lead these young people to the Lord!

Give to Elisha and Nadege’s mission in Tanzania by marking your donation “Eden Valley Foster Care Mission” and sending it to:

Share this story and ask others to pray and give, too!