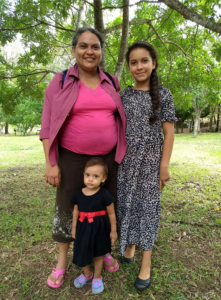 The death of a believer opens the door to truth.

“There is swelling and bleeding in his brain,” the doctor shook his head. “We can do nothing more to save his life.”

The accident had happened very quickly. A faithful church member named Freddy was riding in the back of a truck when the vehicle brakes failed. The pick-up slammed into a rock wall. The impact threw Freddy, and he suffered severe head injuries. An ambulance rushed him to a hospital, but he passed away just as the Sabbath hours began.

Freddy’s widow, Danelia, knew that he would want a funeral service consistent with his Adventist beliefs, but Freddy’s father adhered to Catholicism and insisted on taking the body.

After Sabbath worship, members from La Zona headed to San Manuel where the body had been carried. When they arrived, they realized that Freddy’s parents had organized a mass funeral service in the Catholic church there. They slipped into the Catholic building, not wanting to stir up trouble. But as the service proceeded, righteous indignation rose up among the Adventists.

“Freddy was a good member and leader of our Catholic church,” the priest rambled. “He taught catechism classes to the youth…”

A sudden commotion in the front row interrupted the service. It was Tana, a brave woman currently taking Bible studies from us. She boldly but respectfully rebuked the priest. “Freddy belonged to the Catholic church at one point,” she explained, “but once he learned Bible truth, he left this church. He had attended out of ignorance.” Hundreds of people looked on in amazement and disbelief as she continued. “Freddy was baptized into the Seventh-day Adventist church, keeping God’s true Sabbath day holy.” Quotes supporting the Sabbath truth began flowing from Tana’s mouth.

Utter silence reigned over the crowd. No one could contest Tana’s Scripture verses. The awkwardly-interrupted funeral service ended, and the crowd dispersed to the burial site—but God was not finished yet.

The La Zona church members felt a mixture of emotion as they followed the others. They felt grief-stricken to be laying one of their brethren in the ground. But they also saw the hundreds of souls around them, and realized that it was time to appeal to those still living.

Danelia rose up to share. “I give thanks to God for being my strength,” she said calmly. She testified to what God had done in Freddy’s life, and then asked a question. “What day is it today?”

“Sábado!” everyone answered in unison.

Danelia nodded. “My husband is now resting in the Lord on His Sabbath day, a day He asks us to keep holy. I appeal to you all: be obedient to God’s Ten Commandments, and seek Him instead of the things of this world.”

Freddy’s death was a tragic and unexpected event, but we see how God used his funeral as an appeal to hundreds of souls. For this, we give thanks.

Author
Joseph and Elsa Willis are the directors of Maranatha Relief Organization, which helps provide medical help for the poor and the outcast in Honduras.

How You Can Help
Pray that God will draw near to Freddy’s family, especially Danelia and that God will use this tragic event to bring many to the truth!

Donate. Funds are needed to enable Maranatha Relief Organization to continue ministering to the people in Honduras. Contributions can be sent via PayPal to missionarytraveler@yahoo.com, or mailed to:

Thank you!
Maranatha Relief Organization thanks you in advance for your prayers and support!