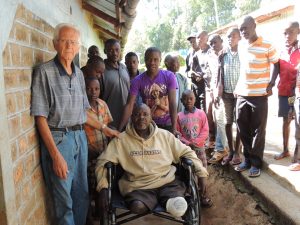 God redeems disaster when an amputee finds the gospel.

Okenyoru had a real predicament. He had traveled to Kenyenya to pick up some beer for the bar he owned in Ibencho. On the way home, his motorbike taxi slid in the mud and tipped over, injuring Okenyoru’s leg. Hobbling home, he asked his wife to clean the wound. Days and weeks passed, and he tried to keep the sore clean; yet his injury never healed. He went to the doctor several times, and took more than one course of antibiotics. Still, the leg did not get better.

Okenyoru was diabetic. He did not know about healthful living. He ate a lot of meat, and his wife used copious oil in her cooking. Okenyoru’s injured leg began to hurt more, making walking difficult. Finally, the doctor told him that in order to save his life, he would need to have his leg amputated above his knee. Reluctantly, Okenyoru agreed to the operation. 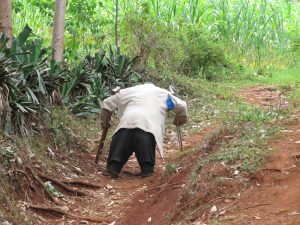 Soon Okenyoru learned to walk with his crutches, navigating the dirt roads from his house to his business. Then Okenyoru had another accident. He was on his way home from a shopping trip to Kisii when his motorbike taxi again slipped in the mud. Again it tipped over, injuring his remaining leg. This time he was more diligent to keep his leg clean, but his wound still did not heal. He did not know that he needed to watch his diet and keep his blood sugar under control to help his leg to heal. Once again, the doctor told him that the only way to save his life would be to have his leg amputated above the knee. Okenyoru struggled with this decision, but he knew that his wife and children needed him. He would have to learn to take care of himself with no legs.

After the surgery, Okenyoru went to the Advent Hope clinic in Ibencho to have his stump cleaned and fresh bandages applied. With keen interest, he noticed that the clinic had a wheelchair. “Would it be possible for you to get me a chair like that?” he asked the nurse. Advent Hope had shipped medical supplies to the clinic, so the workers agreed to get Okenyoru a wheelchair. The bumpy, muddy roads made pushing the wheelchair a challenge, but at least he had some independence now.

As he continued visiting the clinic, Okenyoru became curious about the nearby orphanage, widow’s home and church which seemed to be run by the same group as the clinic. When he asked about the organization, someone offered him Bible studies, and he accepted. He learned that his body is the temple of God, and with sorrow he realized that he had not taken care of his body. Would God accept him? The Bible worker assured him that God accepts people as they are, and that he could change his life by trusting in the power of God. Hope returned to Okenyoru’s heart. He decided to give his heart to the Lord and be baptized.

The sun shone brightly on the morning of Okenyoru’s baptism. At church, he heard a powerful message about Jesus’ soon coming. Joy filled Okenyoru’s heart as he thought of Jesus healing his broken body and taking away his troubles. A storm blew in, and as the people congregated at the river, rain began to fall. No storm could stop Okenyoru, however. Today he would be baptized and become a new creation!

Author
Bill and Becky Humeniuk of Advent Hope Ministries run a school and orphanage in Kenya, educating children in the teaching of God’s Word.

How You Can Help
Pray for the expansion of the medical missionary work at the three Advent Hope clinics.

Pray for the Bible workers as they endeavor to spread the Three Angels’ Messages.

Give to help Advent Hope purchase land and build additional rooms for the clinics, and to purchase Bibles to give to people wishing to study.