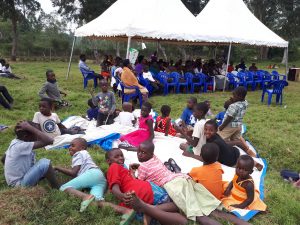 Gospel Light in the Darkness

Residents of Bwera were known for their loose and lewd behaviors. As the sun set on Saturday nights, Bwera residents flocked to the famous “Kabagarame,” where pork and partying were significant themes. Only the breaking dawn sent the partiers home to Bwera with a hangover.

This stronghold of darkness remained a challenge for the Seventh-day Adventist community in Ruhandagazi. For a long time, we as a church pondered how we could reach Bwera’s perishing souls.

We decided to step out in faith. A volunteer evangelist was sent to Bwera, where he visited each house and planned to hold an evangelistic series. 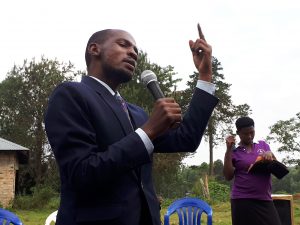 Evangelist Mwesigye Hosea used an amazing approach to break down barriers. He skillfully crafted little cooking “stoves,” and distributed them free of charge. The community loved him for meeting such a crucial need. Hosea eventually met every person in Bwera—because almost every home needed a stove. God blessed his soul-winning efforts with five baptisms in May 2018.

Rays of light beamed over the darkness of this village. Our church painstakingly raised the money to cover the cost for an evangelistic series in Bwera, but a new challenge arose. A local father was angry because his daughter, Linus, had become an Adventist. He used his connections with local political leaders to deny our request for the series. “They are confusing our children with religious fanaticism!” he complained.

We tried several times to proceed anyway, but the legal process stalled our plans. When Linus shared her father’s logic with us, we decided to change our tactics. Instead of asking the local authorities, we wrote to the president’s representative. Our church fasted and prayed. Permission was granted, and the meetings commenced. 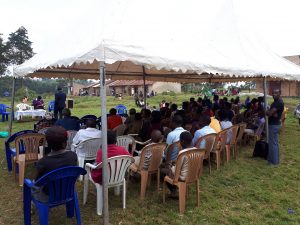 The most complicated spot in Bushenyi was blessed with gospel messages for two weeks! Evangelist Hosea covered important topics including the Sabbath, State of the Dead and the Second Coming. The message touched people’s hearts. Our tent was too small to cover all the people who came, and we were compelled to extend it with tarps sourced from the community. Seven more people decided to be baptized, including Sunday Robert, Linus’ father who had staunchly opposed the meetings.

“I want to go to heaven also,” Sunday spoke with conviction as he joined the others for baptism.

Currently, Evangelist Hosea is supported by the church with food and house rent, but he needs a basic stipend to aid him in further evangelism. Twelve members worship every Sabbath now, in the city we deemed so difficult to reach. They serve as the nucleus of a mission made possible by God’s power.

Author
Pastor John Kaganzi is the district leader in the Ruhandagazi area in Uganda.

How You Can Help
Pray for all the various ministries in Uganda and that all the workers will stay faithful to the truth.

Pray for the work Hosea is doing in the village of Bwera, that many more souls will come to the light!

Donate. The work in Uganda is growing rapidly and needs your help! If you feel impressed by the Holy Spirit to contribute to spreading the ‘Three Angels Messages,’ mark your donations “Uganda,” and send to: