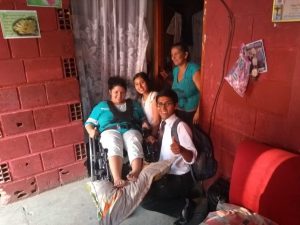 Lina sighed as she dropped the last coins into the cash register. It had been a long night, but closing time had finally come. She picked up her keys from behind the bar and turned toward the door.

Just then, a man staggered in. “Hey lady,” he slurred, “sell me one last beer.”

Lina looked at the clock, then at the drunk. “No, señor,” she shook her head. “We are already closed.”

The man’s face turned red and he reached for the gun in his holster. Bang. Lina’s head throbbed, and everything went black.

Miraculously, Lina survived the gunshot to her head, but life had been dreary ever since. Now mostly paralyzed, she lived with her sister, her parents and her young son. Instead of being grateful that her life had been spared, her family seemed to begrudge the care she required. They reviled her for her wickedness and made her feel as though she had caused her own wretched condition. Lina had lost almost all hope. Then Arnold knocked on her door.

Arnold’s kindness brought a glimmer of joy from the first day. Every week, he visited Lina to give her Bible studies and share encouraging promises. When Arnold left town, he arranged for other Bible workers to continue visiting Lina. Their songs, Bible studies and prayers brought a smile to her face. Lina’s hope revived because of God’s Word and His missionaries.

When the Bible workers first told Lina about a week of prayer to be held at the local Seventh-day Adventist Church, she immediately told them she wanted to go. But there was a problem. Cordoba, the town where Lina lives, lies at the foot of the Andes, which means there are no flat streets. From one end to the other, the town is uphill. It would be a real challenge to push Lina’s wheelchair all the way to the church! Moreover, the doctors had advised Lina only to leave home in an ambulance. Her wheelchair does not fold, so it would not fit in the vehicle available to give Lina a ride to the church—and she is a heavy person, so it would be difficult to get her in and out of the car. Lastly, her parents would have to give their permission for Lina to attend the meetings. 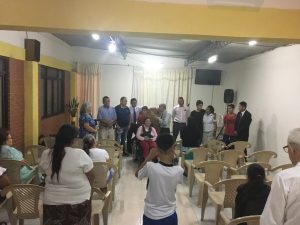 Challenges notwithstanding, we decided to move forward by faith. God touched Lina’s mom’s heart, and she gave her permission for the first night. One of the missionaries pushed the empty wheelchair all the way up the road to the church, while I drove her in the car. It was the first time since the shooting, three years past, that Lina had been out to see the town. Tears mingled with her smile as we drove—but when we arrived at the church, Lina seemed to be the happiest woman alive. At the end of the sermon, when the preacher made the appeal, Lina wheeled her way forward. She decided she wanted to be baptized!

The next day we brought a bigger car to pick up Lina, but to our disappointment, her angered father would not allow her to go. We prayed harder. The following day, some of the church members visited her, and finally, her parents consented to let her go. Later the pastor visited, and agreed for the missionaries to proceed with final preparations to help Lina be ready for baptism.

Our hearts have rejoiced to see the decisions Lina has made for Christ. We praise the Lord for answering our prayers and giving Lina victory over Satan’s plots!

Author
Daniel Miranda is the chair of the Bible and Evangelism Department at Fundación Las Delicias.

How You Can Help
Pray that Lina will fully surrender her life to God day by day, and for her family also to be touched with the gospel message.

Give to the work in Colombia by sending your donations marked “Colombia Evangelism” or “Colombia Church Planting” to:

Thank You
Fundación Las Delicias says thank you to all the MPI supporters for your contributions to God’s work on their side of the world!