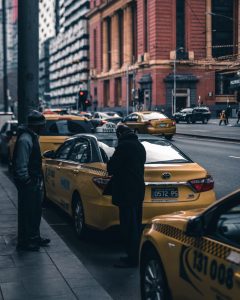 A Seventh-day Adventist gets a free taxi ride for witnessing!

It was later in the morning when I realized I needed to get some groceries. Our hotel breakfast had been scant, since almost all the food was unhealthy, and my daughter and I would be here in Ottawa, Ontario for several days.

Asking around, I learned of a grocery store four or five blocks away. I could easily walk there—except that no one seemed able to give me exact directions. Streets went in all directions, heavy with traffic. How could I find the store?

Finally, a thought came to me: A taxi cab driver could certainly give me directions. Walking out of the hotel, I spotted two cab drivers visiting with each other. Both of them looked Middle Eastern, so as one of them drove off in his cab, I greeted the other in Arabic, “Salam! [Peace!]”

The cab driver stared at me. I smiled and gave him the full Arabic greeting,“As-salamu Alaykum! [May peace be upon thee!]”

Looking puzzled, the man began to ask questions—good questions! I told him I was a Seventh-day Adventist, and that we don’t eat pork. His eyes widened, and he asked even more questions. I told him we also don’t drink alcohol, nor do we bow before images or worship Mary. Then I told him my dilemma. “I don’t eat ‘haram’ [forbidden] food, and this hotel doesn’t have many options for me. I need to find a grocery store nearby. Can you direct me?”

Immediately, he gave me directions. Then he said, “Do you have two minutes?”

“Sure,” I said, “I’d be happy to talk to you.” As he peppered me with more questions, I said, “Look, we are the people of the Book spoken of in the Qur’an.” I handed him a tract entitled, “People of the Book.” The tract cover gave the reference for the text in the Qur’an that I had just mentioned. Reaching down in his side door, the man pulled out his Arabic Qur’an and searched until he found the text. After reading in Arabic, he proceeded to translate the passage into English. I was amazed that his translation was worded even more strongly than what I had read in Yusuf Ali, the English version of the Qur’an. “Yes,” I said, “that is who we are and what we believe!”

He gazed at me solemnly. “If this is who you people are, then you are the true people of the Book!”

As he continued to ask questions, I gave him the best answers I knew. “We do not worship on the Crusader’s Sabbath, but the Creator’s Sabbath,” I told him.

“Which day is that?” he asked.

“The same day that Abraham, Noah and Adam worshiped the Creator,” I said.

Now he really stared at me. “Get in the cab. I am driving you to the supermarket for no charge,” he said. We had an excellent time talking as we drove to the store. When we got there, he took several of my tracts and gave me his name and contact information. My new friend Mike had reminded me how easy it is for Seventh-day Adventists to make friends with Muslims!

Several days after meeting Mike, I returned back home, but Mike and I have kept in touch through texting. I continue to encourage this man who showed me such kindness, and hope to meet him again one day in the Kingdom!

Author
Rudy Harnisch of Amazing Facts Canada is the liaison for Adventist-Muslim Relations for the Seventh-day Adventist Church in Canada.

It takes only a little time to learn the Arabic greeting, “As-salamu Alaykum,” and this simple phrase can open hearts and give you the chance to share your Seventh-day Adventist faith with Muslims. Not sure what else to say? You can direct Muslim friends to www.salahallah.com for information created by Adventists for Muslims. For more sharing tips and resources, contact Rudy Harnisch at sdabooks [at] gmail [dot] com.