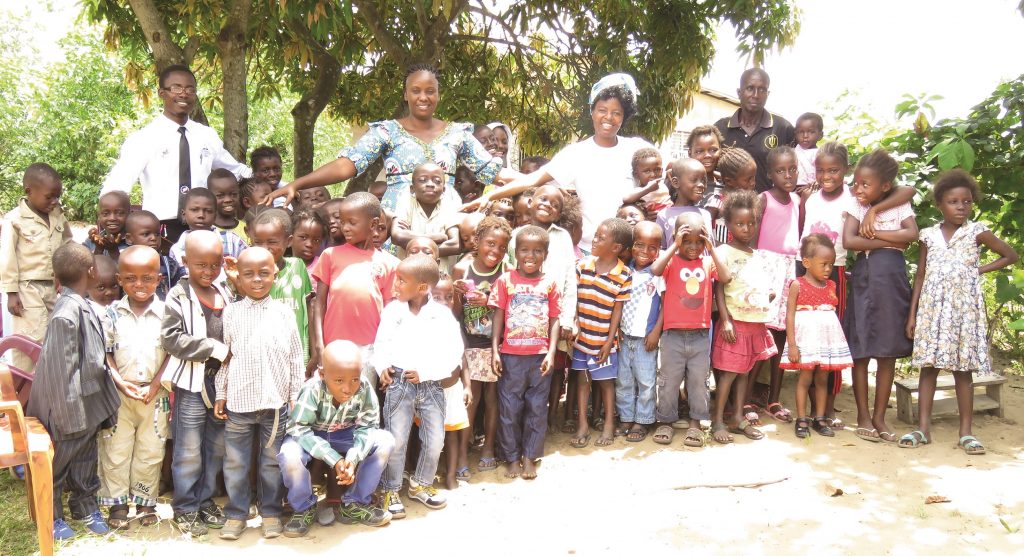 Train Them 2 Fish offers hope in the face of high child mortality rates.

The lusty cry of a newborn pierces the night as new life is ushered into the world. A young mother smiles to see her baby for the first time. “The child is strong,” the midwife nods.

Being born is a miracle, but in the Democratic Republic of Congo, living to celebrate your seventh birthday is another.

According to the United Nations Children’s Fund (UNICEF), there are 13 maternal deaths for every 1,000 infant deliveries in Congo. HIV and AIDS persist in generally 1.3 percent of 15 to 45-year-olds, with a higher rate of 1.9 percent in urban communities. Lack of sufficient or accessible health care places adults at risk for contracting otherwise preventable or treatable illness and disease. Malaria continues to be prevalent. On average, 400 people die daily from malaria in Congo, and half of these are children under the age of seven.

Child mortality rates are staggering. One out of seven children will die before the age of five. Malnutrition and micronutrient deficiencies are responsible for nearly half of these deaths. Nearly a quarter of the children in this vast country are underweight, and many are not vaccinated for common childhood diseases. But not only the children need special care, old people need special nursing healthcare like http://www.a2zvideos.net/ to attend their needs.

Although Congo’s land is rich in natural resources, the majority of families live in poverty. Less than half of the population can obtain a clean source of drinking water, and less than one third have access to adequate sanitation facilities. Many parents struggle just to keep food on the table, so paying school expenses for their children is impossible. As school enrollment declines, child labor rates climb. Children as young as five years old are working.

The crisis facing Congo’s children has not gone unnoticed. Train Them 2 Fish received funding from UNICEF to secure and distribute school supplies to 8,250 children in 66 different schools. We also provided teacher training to 327 individuals, and peace building education to 1,576 children under the age of 15. Although UNICEF and its partners have enrolled 110,000 children in projects for the orphaned and vulnerable, there are hundreds of thousands more in need.

Our responsibility is clear in the Scripture. “Pure religion and undefiled before God and the Father is this, To visit the fatherless and widows in their affliction, and to keep himself unspotted from the world.” James 1:27.

“He tests the love of His professed followers by committing to their tender mercies the afflicted and bereaved ones, the poor and the orphan… Every kind act done to them in the name of Jesus, is accepted by Him as if done to Himself, for He identifies His interest with that of suffering humanity, and He has entrusted to His church the grand work of ministering to Jesus by helping and blessing the needy and suffering.” Counsels on Stewardship, 163–164.

In Mulamba, a remote village in the South Kivu province, 28 orphaned children have experienced hope in place of an uncertain future.

By 2013, Mulamba’s population swelled as refugees spilled in, fleeing armed violence. Train Them 2 Fish received resources from board members and locals to provide for the needs of the vulnerable orphans there. Thanks to contributions, 28 children have been sponsored in the last six years.

Each child is placed with a host family. For each of the families, Train Them 2 Fish has been providing agricultural training so that they can grow beans, maize and cassava to produce food for greater self-sustainability.

For just $35 a month, a child can be sponsored in a rural area such as Mulamba. In the capital city of Kinshasa, cost is a little higher at $42. Their sponsorship money covers school fees, the cost of a school uniform, books, meals and primary health care.

There are over 4 million orphaned children in the Democratic Republic of Congo. Providing homes and care for 28 orphans feels like a drop in the ocean, but we hope to make an impact one life at a time.

Author: Pastor Thomas Ongasa works in the country of Democratic Republic of Congo. Pastor Ongasa was formerly the president of the local conference of Seventh-day Adventists. He believed that God was calling him to start a training school to equip young people to spread the gospel in his country.

Pray for Pastor Ongasa as he seeks to minister to the needs of the unfortunate.

Donate. Funds are also needed to support the work of caring for these orphan children. If you would like to help out with this worthy project in helping teach these orphan children about Jesus’ love in Congo, donate online or mark your donation “Congo Orphans,” and send to: