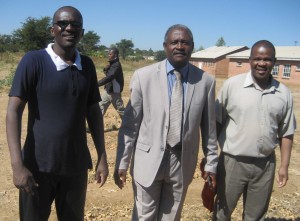 “Many months passed by after Paul’s arrival in Rome, before the Jews of Jerusalem appeared in person to present their accusations against the prisoner. . . . Delay would further their object, as it would afford them time to perfect and execute their plans, and so they waited for a while before preferring their charges in person against the apostle.

“In the providence of God, this delay resulted in the furtherance of the gospel. Through the favor of those who had Paul in charge, he was permitted to dwell in a commodious house, where he could meet freely with his friends and also present the truth daily to those who came to hear. Thus for two years he continued his labors, ‘preaching the kingdom of God, and teaching those things which concern the Lord Jesus Christ, will all confidence, no man forbidding him.’” Acts of the Apostles, 453.

I find it interesting that in Paul’s day, God’s providences caused a delay that resulted in the furtherance of the gospel. When I was in Malawi a few months ago, we experienced a delay in the small city of Salima; and although we didn’t know it at the time, this delay, too, was in God’s providence. We had been traveling in the northern part of the country visiting and encouraging the church members to remain faithful to the Lord. As we returned to our home base where we would sleep for the night, the vehicle we were traveling in started to make a loud squealing noise. We had traveled many miles so far, and we thought we could make it back without incident. The sun had set, and it was now late in the night. The squealing noise was becoming more and more noticeable, but we knew we had only about three more hours of travel. As we passed through the town of Salima and were about to move to the outskirts of the city, we decided the make another inspection of the vehicle. Nothing seemed unusual except the noise, so we decided to pray and ask the Lord what we should do. After praying, we felt impressed to stay in Salima until morning.

In the morning, Brother Golden went out to find a mechanic and parts to fix the car. While he was waiting to buy the parts, he struck up a conversation with a Muslim man. Soon the topic of discussion turned to spiritual matters. The Muslim man ended up asking Golden if he would come back to conduct a seminar in Salima. Golden agreed and set up a time to organize the meetings.

Recently, Brother Golden sent me pictures and reports from these evangelistic meetings. The Muslim man gathered more than a thousand people, mostly Muslims, to attend the meetings, and Golden spent three weeks presenting the Three Angels’ Messages to this crowd. Using the teachings within the Koran about the Sabbath, the judgment, hell and many other doctrines, he was able to show the complete teachings from the Bible. More than 79 Muslims, including the man Golden met in Salima, were baptized a couple of months after the meetings. Many more are waiting to study and prepare for baptism! If we had driven on we would have broken down or crashed, because the bearing on the wheel was almost entirely gone—but worse yet, we would have missed this opportunity to preach to hundreds of people. Will you join us in proclaiming the gospel message in Malawi? Mark your donations “Malawi evangelism” or “Malawi churches.”

Marvelous are the providences of God!