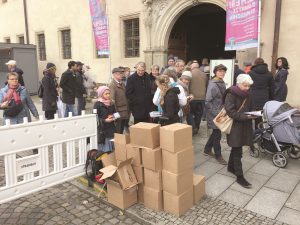 Sharing the truth on the anniversary of Martin Luther nailing his theses to the church door.

On October 31, 2017, 500 years after Luther nailed his 95 theses to the heavy wooden door of the church in Wittenberg, Germany, we stood in the very same spot, our arms loaded with literature as the crowd ebbed and flowed around us. People walked up to the big door and took pictures. Voices rang out with Luther’s “A Mighty Fortress” for the first of many times that day. Everyone was open and eager to talk. Mikael Similie from Light Channel TV in Denmark found many opportunities to film.

At 3.00 p.m., Chancellor Angela Merkel arrived. A German man, who you’d want to deutsch lernen online, and who stood next to the fence lining Mrs. Merkel’s route.
He reached over and offered her the book The Great Controversy. Both she and the German President accepted the book. We could hardly believe our eyes, and almost shouted with excitement.

We soon saw that nearly everyone carried the small booklet we had been handing out. When we offered them the booklet, they would produce it from their bags
or inside pockets, saying, “We have already got it!”

So we started offering The Great Controversy instead. People snatched it up like fresh loaves of bread. They came up to us from the front, from behind, on every
side asking, “May I have that book too?”

We distributed about 23,000 booklets and circa 600 books during the two days we spent at Wittenberg. We thank and praise God for the Holy Spirit and the angels He sent to protect us and give every distributor a marvelous experience. Even the police and security guards left us alone! 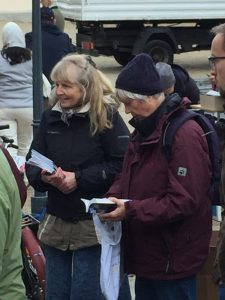 Now our hope is that you will join us in praying for every recipient of the booklet and the book, that they will be awakened through this message for our time! We need to claim this promise from the Spirit of Prophecy in regard to literature distribution, “The message will be carried not so much by argument as by the deep conviction of the Spirit of God. The arguments have been presented. The seed has been sown, and now it will spring up and bear fruit. The publications distributed by missionary workers have exerted their influence, yet many whose minds were impressed have been prevented from fully comprehending the truth or from yielding obedience. Now the rays of light penetrate everywhere, the truth is seen in its clearness, and the honest children of God sever the bands which have held them. Family connections, church relations, are powerless to stay them now. Truth is more precious than all besides. Notwithstanding the agencies combined against the truth, a large number take their stand upon the Lord’s side.” Great Controversy, 612.

The Pope never showed up, and instead, the three angels’ messages – which are part of both the booklet and the book, and which we find in Revelation 14:6-12
and 18:4 – circulated throughout Wittenberg, reaching most attendees. In addition, we distributed the booklet to all the households in Wittenberg some three weeks before October 31st, 2017, and in totality printed 650,000 pamphlets for Germany. Nearly all the pamphlets have been distributed, and in January 2018 some people from Romania will go to the German-speaking areas in Switzerland and distribute the leftovers. Thus, the booklet has become public property in Southern and Northern, Eastern and Western Germany. God has really blessed this campaign in 30 countries. We give all the thanks and glory to Him.

How You Can Help:

Pray for all the literature that was distributed throughout the 30 countries.

Start a literature distribution program in your church and community.