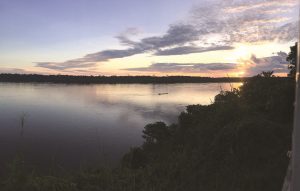 An old mission story inspires a present-day missionary to continue pressing on.

The shimmering African sun sank low on the horizon, leaving a golden glow on the dusty streets of Kisangani. Ducking under a loose marketplace awning, two menacing tribal witchdoctors stepped onto the street, silent except for the scraping of their sandals.

“Their house is around the next bend,” one whispered huskily. “The American missionaries will be made to fear tonight.”

Unaware of their danger, the weary young Americans prepared for bed. They had worked hard and eaten little that day. But compared to the plight of a desperate people struggling with the terrible aftermath of a crippling war, they considered themselves blessed.

The witchdoctors crept toward the house, then suddenly staggered back. Where seconds ago there had been only the faint glow from inside the house, there now blazed a white-hot light that almost blinded the trembling men. A guard of mighty beings surrounded the humble missionary house. The witchdoctors stumbled over each other in their panic to get away from this power that dwarfed any they had ever known.

The story soon spread far and wide. As the faithful missionaries worked and prayed, they saw great fruit. Bible workers and church planters, along with their families, set out for villages all over the country, carrying the light of God’s Word into the darkness. They faced many challenges, but they pressed on in faith, remembering the angels and trusting that God was always near.

Nearly ten years went by. Then, in 2016, my husband Christopher and I found ourselves led to those same dusty streets. As our vehicle bounced through Kisangani for the first time, I felt bewildered by the chaotic mix of pedestrians, motorcyclists, and vehicles on the streets. We passed by walls still riddled by bullet holes, and children leading blind beggars. The ornate, partially-built homes of the rich sat beside mud and bamboo shelters where half-dressed children scraped crusty pots for food. 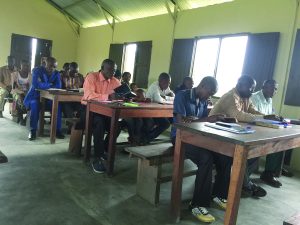 When I stepped onto the ground, the unfamiliar language and culture overwhelmed my senses. Women and children carrying large bundles of cassava leaves on their heads and pineapples in their arms surrounded me, their large eyes begging me to buy something. My heart yearned after them.

During our first several months, we traveled by dugout canoe and dusty road to multiple villages, helping wherever we could. Although I fell ill repeatedly, I plodded onward. Then I came down with malaria.

For several weeks I was too weak to do much. But one day I found the energy to put on a hat and walk slowly to where Christopher was drilling a well with
several onlookers.

Pastor Mtenzi, a missionary team member from Tanzania looked at me with sympathy in his eyes. “Will you return to us again?” he asked.

I paused. In spite of my discouraging sicknesses, I could see God working mightily to envelop this country of darkness and despair with the warmth of His love.
Church planters spread out into the jungles, preaching the Gospel far and wide. As our team members drilled wells and provided clean water, entire villages opened up to hear the message of God’s love.

Reflecting on the mission’s beginning, I fully believed that those angels still surrounded God’s own. I knew that I wanted to be on the front lines of this great work, no matter the risk. The prize of seeing these hopeless ones find Christ would be worth any sacrifice.

I turned back to Pastor Mtenzi and smiled. “Yes, Pastor, I will return.” 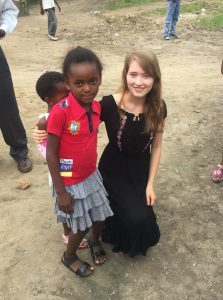 Author: Abigail Duman is a missionary for Congo Frontline Missions.

Pray for Congo Frontline Mission’s health workers and church planters as they spread the gospel in the spiritually dark areas of Congo.