A tragic death brings about 90 baptisms for Christ.

A short walk from my home lies the village of Nazombe. In spite of my repeated attempts to make friends in Nazombe, the villagers resisted my efforts to share the gospel with them. Then one day, the village chief disappeared. Rumors spread that I had killed the chief and sold his body. I realized the situation was grave and that without God’s protection the villagers could take my life. My family and I fasted and prayed for 21 days, asking God to reveal the truth of the chief’s disappearance in order that God’s name be honored.

On the twenty-first day, I met a man from Nazombe on the road. He greeted me by saying, “Pastor, your God is a miracle-working God. The man described how the chief’s body had been found in the river, attached to two huge stones weighing almost as much as the chief himself. 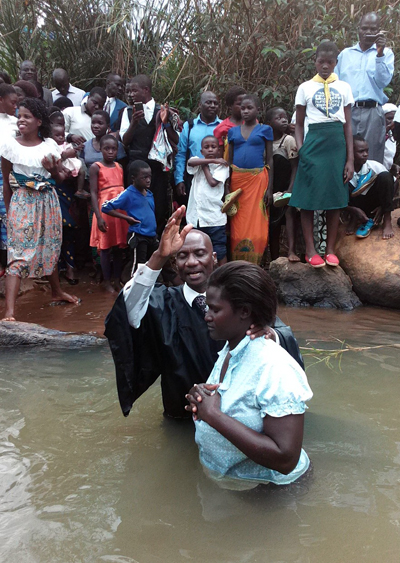 The chief’s brother was eventually convicted of the  murder, and I was invited to visit Nazombe. When I arrived, the people welcomed me openly. “Tell us about your God who has saved you,” they begged. I visited each home and prayed with them, shared corn and gave clothes to those in need. Next, I held evangelistic meetings and hundreds of people came to the meetings to hear the three angels’ message. When the meetings were over, I called for the people to give their hearts to Jesus, the Way, the Truth, and the Life. More than 80 people gave their hearts to Christ and were baptized.

The government of Malawi visited me to hear for themselves the story of how the chief’s death had changed the lives of the people. They recorded my testimony and broadcast it over the national radio at least three times. From that time, I have been receiving requests from a number of non-Christian village chiefs to go and teach the people about Jesus Christ.

In 2001, my team and I held an evangelistic meeting for the Paramount Chief Kuntumanji after holding Bible studies with him. He was the only one that I had not visited in the area. The Chief and his guards listened to my preaching and invited me to hold the meetings at his home. He invited all of his junior chiefs to attend daily for 21 days. I introduced Jesus Christ through what happened to Abraham, who was asked by God to offer his only son as a sacrifice to God. When Abraham took his knife to cut the neck of his son, God stopped him and told him not to kill his son but rather the lamb which God provided for him. The son of Abraham represents us, and the lamb represents Jesus Christ. The Chief and his guards plus some 92 people accepted Jesus Christ through baptism. They were baptized together with their wives.

Another meeting I conducted was in Lilongwe Chisapo village. Mr. Muhammad Amin, a former Muslim leader, was listening to my preaching every evening. The tenth day, Mr. Amin came out of his house and wanted to know who was preaching. He told his family to always listen to the gospel. He later came behind the pulpit and whispered to my boy, “Please give me a spiritual book.” I was told and gave him the book Allah’s Healing Ways. He read the book every day, and in the evening he attended the meetings. Later he was baptized together with his wife. He has been joining me during my meetings to give the testimony of his conversion. He is now a head deacon at his church. God is using him to bring more people to His kingdom. This is a non-Christian area where many people have not yet heard the truth.

I just pray to God to win one soul for Him each day. My prayers have been answered, and God has blessed our ministry with many baptisms and new churches established among the unreached people.

Brother Lapani is a layman with a burden for souls. He conducts evangelistic meetings in predominately Muslim areas of Malawi.

Pray for Brother Lapani as he uses friendship evangelism to reach hearts for Jesus.

Give. The work in Malawi is in need of Bibles, church building and food and clothing for the very poor. If you feel impressed to help this work, you please mark your donation “Malawi” and send it to: