John the beloved made a very intriguing statement in the last verse of his gospel. “And there are also many other things that Jesus did, which if they were written one by one, I suppose that even the world itself could not contain the books that would be written. Amen.” John 21:25 Have you ever wondered what Jesus was doing during His three and half years of ministry, besides what’s recorded in the gospels? The Spirit of Prophecy gives us a clue how Christ occupied His time during His time in ministry. “The Lord desires that His word of grace shall be brought home to every soul. To a great degree this must be accomplished by personal labor. This was Christ’s method. His work was largely made up of personal interviews. He had a faithful regard for the one-soul audience. Through that one soul the message was often extended to thousands.” Christ’s Object Lessons, 229 It’s amazing that Jesus, being the God of the universe and being used to the adoration of millions of angels would regard one soul of infinite value to spend one on one time with him or her! If we are going to follow Christ’s method of labor, we must also have a faithful regard for the one soul audience. “Christ’s method alone will give true success in reaching the people. The Savior mingled with men as one who desired their good.” The Ministry of Healing, 143 Jesus purposely went to places where He could mingle with the multitudes. Not for the purpose of entertainment but to meet and build friendships with souls that needed the gospel. Mission Projects International is dedicated to sharing the gospel with those who are near and a far off. To foreign nations as well as our neighbors. 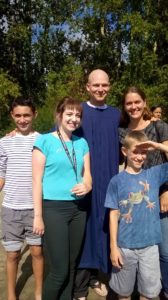 Brother Troy after his baptism.

Not long ago I had the special privilege of sharing the Seventh-day Adventist message with a man named Troy, whom I met at a gym. I never would have believed that Troy was interested in spiritual matters. But each time I saw him a quote continued to impress my mind. “In Christ like sympathy we should come close to men individually, and seek to awaken their interest in the great things of eternal life. Their hearts may be as hard as the beaten highway, and apparently it may be a useless effort to present the Savior to them; but while logic may fail to move, and argument be powerless to convince, the love of Christ, revealed in personal ministry, may soften the stony heart, so that the seed of truth can take root.” Christ’s Object Lessons, 57. One day he asked me what I did for work. I casually told him that I was a pastor of a church. This peeked his curiosity of about me. The next time we met our conversation turned again toward spiritual topics. He asked me how I knew that the Bible is true? I told him that prophecy is one of the ways in which we can know the veracity of the Bible. “What is prophecy,” was his response. I asked him if he would like to get together some time and study Bible prophecy. He wasn’t too sure about studying the Bible with someone he didn’t know very long, but he finally agreed to sit down with me only once. Fearing that his wife would discover his desire in spiritual things, we met at an outdoor café. I started with the subject of Daniel two and the image. This was quite amazing to him that the Bible accurately foretold the rise and fall of the four world empires and that the Rock was a symbol of the second coming of Christ. This led him to desire more Bible studies. After many studies, Troy was finally baptized and is sharing his faith with others. He finally revealed to his wife that he was studying the Bible with a pastor, this opened the doors for me to sit down and study the Bible with their whole family. Darci his wife, has now made the decision to be baptized as well. Please pray for this family and those who you are working with in personal ministry. Let us be seeking to save the lost in these last days.

Yours in the sharing the gospel.