Village chiefs and ancestor worshippers accept Jesus as their Savior in rural Africa.

The Waldensian motto, “Lux lucet in tenebris” means “Light shines in darkness.” This is exactly what happened during Brother Joel Mapamu’s mission journey to the Sankuru Region, a remote, impoverished area in the Democratic Republic of Congo, in July–September 2016. 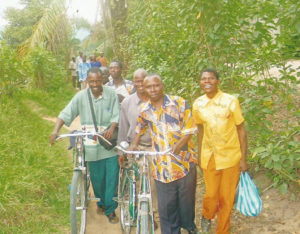 Brother Joel praises God and thanks His angels for their protection during the mission trip. Traveling mostly by foot like his Master, Joel spent his days teaching, preaching the Three Angels’ Messages, visiting people in their homes and organizing bands of believers. The enemy incited ancestor worshippers and Catholics alike to try to hinder him, but God rebuked their efforts. The Holy Spirit moved upon people who had never trusted in Jesus, but instead prayed to their ancestors, to accept Jesus as their personal Savior. Even village chiefs were converted.

One convert shared: “I want to testify what the Lord did for me during the Bible studies. I was practicing sorcery and during these studies I began to realize that sorcery would bring me to death. I had killed my older brother, a salesman of Kela, and my younger cousin and was ready to kill my mother in order to get more money. As I listened to the teachings of Brother Joel about the imminent coming of the Lord Jesus Christ and about the Antichrist, I began to have nightmares. I went to talk to Brother Joel and gave him all my sorcery objects. Brother Joel prayed for me and with me and I renounced the sorcery. I found peace and my bad dreams ceased. God worked for good in my life.” 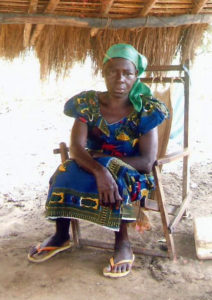 Another person wrote: “My brothers and sisters, God is real. Many people of different religious persuasions tried to talk to me, but I chased them all away with my machete until nobody dared to put their feet on my property again. I didn’t want anyone to talk about Jesus after the sudden death of my father, a devout Catholic. He suffered such severe chest pain that we decided to take him to the hospital in Kole. The Catholic people of our village, especially the leading lady of the Mary’s Legion, told us to wait for the priest to come and pray for my father. It took him two days to arrive. After he performed his ceremony with candles, he said, ‘Your father will be healed.’ Four hours later, my father was dead! I was very angry to have wasted time waiting for the priest instead of taking my father to the hospital. I decided I would no longer allow Catholics to visit us.

“But God lives! The Adventist missionary came to us, bringing the message of God. During his sermon he looked straight at me and said that Jesus loves me. I was stunned to hear this, because I didn’t want anyone to talk to me about Jesus. He then repeated, ‘Jesus loves you!’ and invited me to come forward. As I walked toward him, those present believed that I wanted to kill the preacher. They had nicknamed me ‘The Machete.’ Instead I came forward, fell to the ground and began to cry. The Lord transformed me as the man of God prayed for me. God is now my Lord. He accepted me as His son. God is real!”

Though poor in earthly goods, the believers in Sankuru keep growing in faith. May the light of God’s truth continue to shine from their lives into the darkness of superstition all around!

Joel Mapamu
Brother Joel lives and works in the Democratic Republic of the Congo. (Article written by an anonymous sponsor.)

Pray for the believers in this region of Congo, who are often persecuted for their faith.

Pray for help for each one who struggles with poverty and lack of physical and spiritual resources.

Thank You
Because of your donations to our poor fund, Mission Projects International was able to help sponsor Brother Joel’s trip and his humanitarian work in the Sankuru region. Donations to the poor fund also help with medical needs and Dorcas assistance in other needy areas.