This summer, as in years past, about 95% of our neighbors observed the holy month of Ramadan—because 95% of Senegal’s population is Muslim. During Ramadan, believers abstain from food and beverages, including water, from sunup to sundown. Since the religious calendar follows the moon cycles, the month of fasting comes eleven days earlier each year, and these last few years it has come during summertime. The heat makes going without water even more difficult for adherents.

Although Ramadan is one of the pillars of Islam, many people don’t look forward to it. Physical difficulties aside, the religious holiday has become highly commercialized, much like Western holidays. Extravagance is expected at the evening feasts, so people actually spend more money on food than usual. Fasting all day also makes drivers jittery, and traffic accidents increase. Depending on the destination, I often prefer to take a taxi rather than fight with the traffic. Narrow roads combined with speed and poor judgment make for hazardous road conditions, especially at night. Still, God is on the throne. We put our lives in His hand daily! 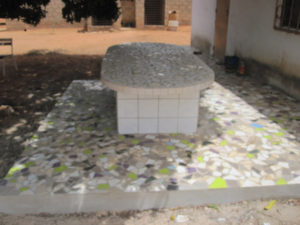 During early summer, we worked at the outpost to construct a covered courtyard with easily accessible restroom facilities for outdoor ministry activities, including our August Vacation Bible School for the village children. The Children’s Ministry department of the West Sahel Union provided materials for 30–50 kids. Please pray for the village children as we continue to reach out to them!

At our rental house in town, I have set up the garage with used and donated furniture so we can comfortably host classes and Bible studies. I also plan to display a few natural remedies for sale there in a tall cabinet I was able to obtain. Already I am having wonderful experiences in the ministry garage studying with two ladies.

Claudine is Congolese and loves to talk about the Bible. I gave her a Bible a few months ago and we have looked at several subjects together. One Thursday she stayed at my house for over four hours studying about the spirit, soul and the state of the dead. The next week, we started talking about unclean meats. She resisted some, so I didn’t force the issue. I just told her to read Leviticus 11.

Esther is a Jehovah’s Witness who visited me while doing her own door-to-door evangelism. I invited her and her daughter in and we had a productive, friendly study about the divinity of Jesus. During the study, she saw that Revelation 1:11 was different in her Bible than in mine. I told her to look at other Bible versions to see what the verse said, and she promised to do so. When she came a second time with her niece, we talked about the soon coming of Christ. Recently she called hoping for another visit, which I was happy to arrange. Please pray for Claudine and Esther. I can see that they love the Lord and want to know Him better.

Challenges abound, but God is so good. We had firsthand evidence of His protection this summer. My son Malcolm had gone to the school to do some tutoring. Meeting his older sister there, he polished off her leftover lunch from a Chinese restaurant. Then, after tutoring for an hour, he went out for a game of basketball. During the game, his body started itching, but he ignored it until he realized it was getting worse and his face was swelling. 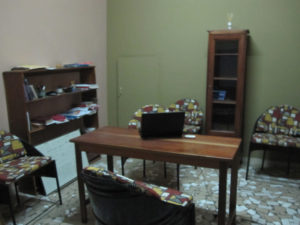 Garage where classes and Bible studies are held.

His sisters had been working at the school’s summer camp that morning. Niassa, his older sister, had left after the activities ended. Then, after walking a few blocks, she decided to return to the school. His younger sister Janie usually did some tutoring after summer camp, but had decided to skip that afternoon. Now the girls were relaxing together in a classroom.

When Malcolm started itching and swelling, he ran to find his sisters. By the time they saw him, his face appeared to have doubled in size and his eyes were almost swollen shut. Niassa had done some medical missionary training at academy and recognized this as a medical emergency. As they rushed out of the building to hail a taxi, a lady sitting on a bench near the entrance saw Malcolm’s face and offered to drive them herself to a doctor near the school.

On the way, my daughters called to tell me what was going on. Immediately, I began praying for Malcolm. Having just finished a tutoring job myself, I took a taxi to be with my kids.

When Malcolm arrived at the doctor’s office, his tongue had swollen up and he was having trouble breathing. He said he felt like he was passing out. The doctor rushed him inside and gave him two shots. When I arrived about 10 minutes later, the swelling was subsiding, although Malcolm was still itchy and agitated. We put a wet towel on his back to calm him, and the doctor observed him for a couple of hours. Then he sent us home with contact information for an allergist who could help us find out what Malcolm is allergic to.

This experience shook us all. Malcolm had had an allergic reaction about 18 years before when we ate in a Chinese restaurant while visiting Maryland. I had ordered vegetarian food and specifically asked them not to use any fish sauce, but the next day Malcolm broke out in hives and later his tongue started swelling. We took him to Shady Grove Adventist Hospital where a kind doctor gave him some Benadryl and told us to get some from the drugstore. I felt quite ignorant to learn that all we needed was Benadryl, but it helped me understand the Bible verse that says, “My people are destroyed for lack of knowledge.” Hosea 4:6.

I was a very new Adventist then, but that experience began my journey of becoming a medical missionary. I had been reading the Spirit of Prophecy and I felt the truth pulling at my heart. From then on I vowed to learn more about health.

Now, 18 years later, living in a foreign country, the situation reoccurred in a much more serious manner. It was a surprise to everybody but God. When I think about the series of providences that happened that day, I feel awestruck and profoundly grateful to our God who sees and knows everything. Both my daughters “just happened” to still be at the school, but of course we know that God arranged it. God also stationed a lady who owned a car in my children’s path so she could be ready to take Malcolm to a doctor she knew with an office close by—closer than the doctor’s office my daughters would have taken him to in a taxi. God is so good!

Every morning I entrust all my loved ones into God’s care, and He has never failed me—not even during the hectic season of Ramadan. We can trust our Heavenly Father. He is our only confidence! “God is our refuge and strength, a very present help in trouble.” Psalm 46:1.

By Deborah Ndione. senegalhealthproject@live.com. Contributions to this project may be made through Mission Projects International, PO Box 59656, Renton, WA 98058, or online at www.missionspro.org, marked “Senegal.”