When Highwood Health Retreat hired me in March 2013 as their first ever full-time Bible worker, I was sure God had led me here. There was so much work to be done! Many guests had gone through the wonderful NEWSTART® health program over the years, and seeds had been sown. My heart’s desire was to connect with people who might be willing to learn more about the Healer they had glimpsed at Highwood!

As yet nobody had signed up for me to give them Bible studies, so the work started small. I would have to tread carefully since most guests come to Highwood for help with their health, not for Bible instruction. My work would be twofold: I would spend time getting to know the current guests, taking them for walks, eating with them and sharing a devotional each morning and evening for anyone interested; and I would follow up with former health guests to find any who might be open to studying.

To reach out to previous guests, I called them and asked how they had liked their stay at Highwood. I surveyed them about the food, the therapy and those sorts of things first, and would end by asking them to evaluate the spiritual aspects of Highwood. Their answers helped me decide where to go next. Could I offer them the health-related Bible studies I had developed? Would they be open for a personal visit? 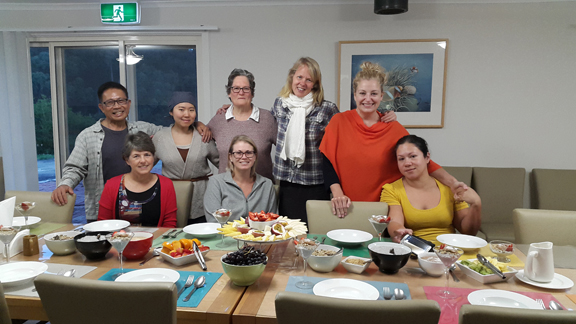 Stine (third from right) with Highwood health guests and staff.

Little by little a circle of special Highwood friends developed. Some were happy for me to visit their homes; others would meet me in a nearby park or restaurant. Our conversations often turned to spiritual topics. Sometimes I would bring my guitar and sing gospel songs. It was slow work, but I knew from the Spirit of Prophecy that “the Saviour mingled with men as one who desired their good. He showed His sympathy for them, ministered to their needs, and won their confidence. Then He bade them, ‘Follow Me.’” The Ministry of Healing, 143.

As I look back, I can only praise the Lord. I now have many Bible studies going, most of them with former Highwood guests! With some it took months or even years of friendship before they were ready for Bible studies. That’s why we can’t give up!

Nikki, 30 years old, is a special friend I study with over the phone. She came to Highwood in 2012, a business-oriented woman with a lucrative job. Her stay at Highwood really impressed her—there was something different about this lifestyle. Going home, she started a spiritual quest. I kept in touch with her over the phone, and we met occasionally. Unfortunately, she seemed to gravitate toward the New Age movement. Still, I kept talking with her and praying for her—and the Lord heard my prayers. Recently, when I visited Nikki, I found her ready! “I was looking forward to you coming, as I wanted to hear more about Jesus,” she said. Then she told me about a client of their business. She had given the old gentleman excellent service, and to show his thankfulness he requested to give her a little book. She took the book home and started to read. “When I came to the passage about forgiveness, I asked God to help me experience it, and I just had the most amazing feeling of something happening within me!” she shared. “The man who gave me the book was a Seventh-day Adventist,” she added.

When I suggested we study a Bible course together, she willingly accepted. “I have never experienced more peace in anything else but this God thing,” she expressed, “so I will give it a go!” In addition to studying with me on the phone, Nikki is reading The Ministry of Healing. Would you keep Nikki in your prayers?

Another former Highwood guest is Anna. When she came in 2015, we made an almost instant connection. Although not Christian, Anna was very open, and very impressed with what she experienced at Highwood. Through text messaging, she sometimes shared with me her struggles with bad habits and depression, and told me how she envied my faith. Still, she didn’t seem ready to make it her own.

I kept trying to encourage Anna and kept offering to visit, but various things kept coming in the way. Finally, last April I got the message I had hoped for: “I would love to catch up with you.” We met up, and what a change! She had started to make steps to overcome her alcoholism by visiting Alcoholics Anonymous. She was keen to show me the flyer they had given her, and I could quickly see that it was very spiritual. Alcoholics Anonymous admits that you cannot win the battle against alcohol in your own power—that you need a Power from outside to help you. The sad thing, though, is that they say you can relate to God however you see Him—in other words, you can create your own idol. Nevertheless, Anna was motivated to overcome, and God gave me an idea: Why not offer to tailor Bible studies for her connected to what she was learning in Alcoholics Anonymous—studies that show how to get to know the true source of power?

I offered, and for the first time she said “yes” to Bible studies! We began by studying our own hopelessness as sinners, our overwhelming problem of addiction to sin. When I told her why Jesus, our only way out, had to die on the cross, I could see she was touched. “This is so special,” she said. “I have never thought of it this way before!” She has now started to read The Desire of Ages, and we are continuing our weekly Bible studies. I request your prayers for Anna!

Maria came to Highwood last January open-hearted and eager to learn. I was out of the country most of the time she was here and barely got to know her before she left. Still, when her boyfriend came to pick her up, I hurried over to say “goodbye.” Their car was already rolling, but they stopped so Maria could get out and give me a hug. “Maria,” her boyfriend asked, “have you asked Stine about giving you Bible studies?” Right then she asked me to come and study with her!

Maria went through 30 Bible studies in record time, not only studying when I was there, but also doing lots of homework herself. At times she struggled, wondering if it would be right to convert from a nominal Catholic to a Seventh-day Adventist. Then one day not long ago she called me. “Stine, could you come and visit us tomorrow? We have some very special news!” When I told her I was not planning to go out that day, she said, “Then I want to tell you the news over the phone. I have made up my mind; I want to get baptized!” Praise God! Maria is soon to move far away. I know the devil will place obstacles before her, so would you please pray for Maria too?

Rarely do we find people as eager for Bible studies as Maria, but often we meet people like Nikki and Anna. It takes patience to wait for the seeds we sow to sprout. Yet what a wonderful promise God has given:

“And let us not be weary in well doing: for in due season we shall reap, if we faint not.” Galatians 6:9.