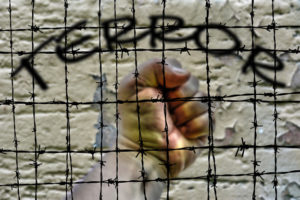 It’s been 47 years since I escaped from my homeland, but I still remember the dreams. For six long years I had the same dream every night. Yes, every single night I dreamed that I had returned to my homeland, had been caught by the police and had been thrown into jail—for the sole “crime” of fleeing the political regime.

Today, I sat in an unfinished room among stones, sand, construction tools and building materials. A small stove radiated some warmth to contend with the drafts coming through the open wall. My host and his two friends had been working together to repair this old house. This morning they had invited me to visit with them while we shared a simple breakfast.

At my request, one of the young men, Madah, began to tell his story—the story of how he and his friend had escaped an enemy regime. Our host had to interpret for me, as I knew nothing of the men’s native language.

It all started when Madah had entered a shop owned by friends. “Salam,* Godless!” the owner greeted him. Unfortunately, another shop visitor heard him—an Islam preacher, better known as a mullah. The mullah asked Madah why his friend had greeted him in that way.

“It was a joke,” Madah replied.

“It wasn’t a joke!” the shop owner countered. “My friend truly is a non-believer.” Madah couldn’t argue, for although he was not “godless,” he did not believe in Islam.

As if in an effort to convert this unbeliever, the mullah told a story about Ali, the son-in-law of Mohammad the prophet. Madah, however, had studied history well enough to know the true story of Ali. Without thinking of the consequences, he confronted the preacher with the facts. The mullah left the shop saying that he would ask his boss, for his boss would know how to answer the objections.

A few days after, the mullah visited Madah in his home and invited him to come outside to have a talk with his boss. Knowing that such a conversation would end in jail, Madah refused, saying that he had work to do.

The mullah left, but a few days later, while a friend was visiting, three policemen appeared at Madah’s apartment. As his friend opened the door, both he and Madah were immediately handcuffed. The policemen took pictures of the walls where Madah had hung pictures of the cross and the Virgin Mary. The policemen also snapped shots of Madah’s books, including his Bible, and confiscated his desktop and laptop computers. Then they shoved Madah and his friend into their car and took them out into the desert.

“What shall we do with you?” the policemen asked the prisoners. Madah knew this was their cue for money, so he bargained with them until they agreed to release the young men for about $2,500. Madah asked to be taken to the bank, where they could withdraw money, but the policemen refused. Instead, Madah was allowed to call a relative to bring the cash. When his family member arrived on a motorcycle with the huge sum, Madah was set free—but not his friend. Madah didn’t know what would happen to him.

With his relative, Madah left the scene and fled 30 miles to where his parents lived. On the way he phoned his roommate, Mahud, who had been absent when the police arrived. He cautioned him not to return to their home, but to join Madah at his parents’ home. That evening Madah and his roommate went to the airport and bought tickets to leave the country. As they waited for boarding and takeoff, they trembled for fear of being caught even then. Mahud assured me that they called on divine help to secure their escape!

At the capital of the neighboring country, an acquaintance put them in contact with a trafficker who said he could transport them to safety. Taking Madah and Mahud into a forest, he left them there with a group of fugitives for two long days. During that time none of them had drinking water, and their only food was a few grams of chocolate. At last the trafficker returned by the night and told them the conditions for transport across the sea to a safe island belonging to Greece. They would have to be silent and use no lights during the voyage. They would also need to pay a high price.

After collecting the money, the trafficker led the group to the seashore and beckoned for them to board a small motorboat. Although the boat’s capacity was about 35 people, 46 people crammed into it. The midnight passage took almost seven hours. Then, about 500 meters from the Greek shore, the unthinkable happened. Unknown to the passengers, the boat had a small hole in the floor, and now it burst into an unmanageable size as water gushed in. In peril of sinking, Madah and Mahud jumped into the sea and swam alongside the boat to alleviate the load. Fortunately, a Greek boat saw their plight and rescued them all.

Safely on the Greek island, the fugitives had to pay another fare—but this one was moderate in comparison with the last price. A big ship took them to Athens, and there they set off on a long march through Europe, always under the surveillance of traffickers who marshaled and hid them until they arrived in a land where they could demand asylum.

One day someone contacted me to find out if the local Seventh-day Adventist Church intended to organize language classes for the refugees in our city. Immediately my heart went out to these people, for I myself had once been in their plight. I arranged to meet with the refugees at our church so that I could ask them about their plans. That is how my wife and I met Madah and Mahud. We decided to invite them to our home and teach them privately, using the Sabbath School quarterly written in their beautiful mother tongue as a text. We also began visiting them at the facility where the government gave them shelter and meals.

From there, our friendship continued to grow until I found myself listening to the story of their escape through our interpreter, a man who has lived in this country for almost ten years. This seemed to be a wonderful opportunity to help both the translator and his friends. When I invited them to attend our church on Sabbath mornings, to my joy they accepted. Madah and Mahud’s friend translates our Sabbath School discussions, with the help of a lady from our church who is married to a man from their country and knows their language well. God opened the doors!

Because of our friendship with Madah and Mahud, we have also organized a Bible class where we have had good conversations about God, our Lord Jesus Christ and the great controversy. Though they have many needs, the refugees know they can find help with their Heavenly Father. As Mahud put it, “I was born naked, without riches, without any political party and without any religion. Now, I want to begin a new life here in Europe.”