Do you go on mission trips in your own country? We do! In the last part of 2015 we took two mission trips in Norway. For the first one, in September, we set aside four weeks to tour northern Norway, visiting non-Adventists who receive our newsletters and pamphlets. Traveling in our camper, we could go and stop whenever we wished with a goal of meeting our contacts in their homes (or our camper). In the relaxed home environment, the people could open up, sharing their true thoughts and asking all their questions. 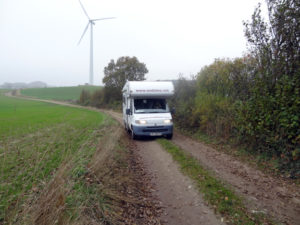 Traveling Norway in the ministry camper.

Our aim for our mission trips is always to settle our friends into the truth by studying the Word of God together. In some homes we stay only one hour and in other homes we stay nearly all day. These face-to-face studies have been fruitful, and many people, especially those that have been in the Pentecostal movement, have accepted the truth. Our doctrines about Israel, hell and other difficult topics can be challenging for them, but some of the people have seen the light from the Bible even on these subjects. During our September trip, four new people accepted the Sabbath as the day of worship!

While in northern Norway, we met a lady in a rural district for the first time. It was difficult to drive to her home with the camper, but we finally arrived. She had received information from us for 25 years, and during the conversation we discovered that she now shares our faith. She told us she reads her Bible every day, and we could see that she is settled into the truth. It is encouraging to meet such people!

On our second trip we went to the districts of Stavanger and Sandnes in western Norway. We had about 100 people we wanted to meet with, but we could only manage to visit about 25 homes. Nevertheless we had many very good gatherings, leaving a few people eager to be baptized soon. The campaign ended well. One November evening after sunset, a new believer was baptized in a little lake on the west coast of Norway. Already the water was chilly, but this was the last chance to hold a baptism before the cold winter arrived! When we left the area, it was with hopes to return and continue visiting contacts as soon as possible. 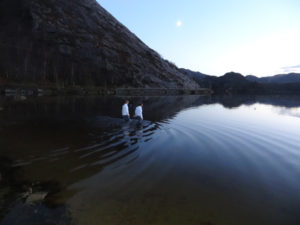 This year is an important year for Christian Information Service. Our main goal is to distribute the pamphlet 2017—500 Years after Luther! In only one year, churches in Europe will celebrate not Luther but the unity between the fallen Protestant churches and the Catholic Church. The pope will visit Sweden on October 31, 2016, exactly 499 years after Luther nailed his 95 theses to the church door in Wittenberg. Shall we be silent in this situation? Sweden and Norway have been strong Protestant countries. Even in our national hymn we sing that King Sverre spoke against Rome. However, the situation has been gradually changing until today, many people even in the Protestant churches do not understand the importance of the Reformation and holding to truth. God needs us to stand up as His modern reformers and spread the word of truth far and near!

By God’s grace, the pamphlet 2017—500 Years after Luther is currently being distributed in Norway, Sweden, Denmark, England, Wales, Scotland, Germany, Portugal, France, Spain, Hungary, Romania, Estonia, Czech Republic, Italy, the Philippines, Poland, India, Iceland, Australia and the United States. Soon it will also be printed for Finland. We give all the honor and glory to God for the distribution of this booklet. 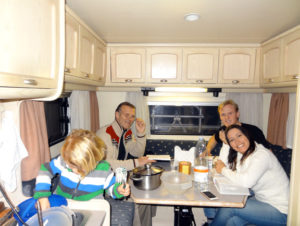 Sharing a meal and Bible study with our contacts.

We pray that you will take the 500-year anniversary of the Reformation as an opportunity to share God’s last-day message with your neighbors. Please spread the word so that we can find more helpers to take part in this project! If you cannot help to distribute this Reformation literature, then please pray for us. Thank you very much, and may God richly bless you.