I had a dream. I wanted to be a priest, but God had other plans for me and He used the Bible to transform my life!

I was born into a very poor family in a small village by the name of Ngonde in the Democratic Republic of the Congo. I was the seventh of nine children. We lived near the river, where people brought their cattle to drink. To support our family, my father repaired the traditional bamboo sandals worn in the Congo. Sadly, he died when I was seven years old and my mother had to find ways to support all nine children on her own.

My family was Catholic, and my siblings and I loved to play instruments and sing in church. Even though we didn’t really take the Catholic religion to heart, I dreamed of becoming a Catholic missionary. I enjoyed church because of the music, and I also loved the films the priest would show us. Unfortunately, many of these films were crude, with numerous scenes of martial arts. As I watched the fighting in the movies, I began to develop a violent temper.

Because of my dream to become a priest, my mother sent me to the Catholic school at Tshumbe, where our bishop resided. Everything went well until my last school year, when I found myself involved in deception. First, a young nun fell in love with me. Although I resisted her overtures, the incident opened my eyes to things in my Catholic community that I hadn’t seen before. I started observing how the priests showed behaviors that were incompatible with their profession of faith. Seeing their actions, I developed a strong desire to get married and thus lost my ambition to become a priest.

Upon leaving the school I began to study music and at the end of my studies I got married. Within a few years my wife and I had four children, whom I supported through singing at the mass. Unfortunately my marriage was marred from the beginning with violent speech and later with physical abuse. After 13 years of marriage, we divorced.

Before I separated from my wife, I met two Seventh-day Adventists, and they suggested that I join them in Bible study. I thought that I knew enough from the Bible to confront them and prove their beliefs wrong, so I determined to ask them difficult questions which I believed had no answers. To my surprise, the men answered my questions with Bible texts every time. I could see that I was wrong and did not have much knowledge, but because my wife was against the Seventh-day Adventists and because I was busy at that time, I lost interest in the studies. The brethren quit visiting and left me alone. 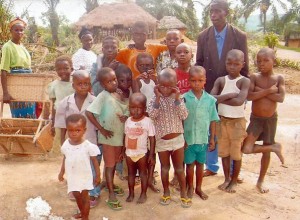 The author with a group of children.

Five years later, after divorcing my wife, I met another Seventh-day Adventist, a missionary named Brother Joel. By that time I was living with another woman, Jolie, and she wasn’t opposed to the Adventist brethren. Brother Joel had copies of printed Bible studies called “New Life in Christ,” which made it much easier to study the Bible together. Over time, I became convicted that what Brother Joel was sharing with me was truth; still, it took me several years to break with my past. I knew that if I wanted to let God take control of my life, I would need to make big changes: I would have to quit my job as a singer at the mass, and I would have to marry Jolie to obey God’s requirements.

I decided to get another job and get married, but I soon discovered that an even more difficult struggle lay ahead: I needed to tame my explosive temper. Brother Joel gave me two special verses from the Bible, which helped me a lot. The first was Psalm 11:5, where it is written that God abhors violence. The second was 1 Peter 3:7: “Likewise, ye husbands, dwell with them according to knowledge, giving honour unto the wife, as unto the weaker vessel, and as being heirs together of the grace of life; that your prayers be not hindered.” This text showed me that if I wanted God to hear my prayers, I needed to witness to my wife and treat her with kindness.

I am amazed at how the Bible changed my life. After much prayer and meditation I asked God to help me conquer my bad temper, and He did! The gospel shared by the Adventist brethren has done so much for me. I now have a happy family. I try to have a good relationship with each of my children and to do everything I can to help my wife Jolie and all our children keep the faith.

I dreamed in my childhood of becoming a priest to help others. Now I am the priest of my household! I am certain that my life has a purpose because I have seen how the Lord has helped me. I am so thankful to God for His patience with me. He gave me the ability to be changed. He adopted me as His child and made it possible for me to be a member of the church that has the truth for the last days!

By Sérafin Longo of the Democratic Republic of the Congo.