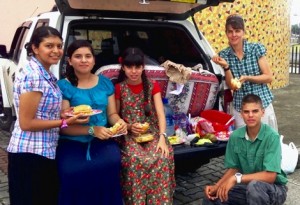 Laurie Orellana & some of the young missionaries

A fascinating verse of Scripture is Matthew 11:12, “And from the days of John the Baptist until now the kingdom of heaven suffereth violence, and the violent take it by force.” How does the Kingdom of Heaven suffer violence and how do the violent take it by force? Certainly, we desire to be part of Jesus’ Kingdom, so we need to know how to “violently” strive for it. What is the heavenly violence that gains an entrance into the kingdom? It is not physical violence, but rather “violence” in prayer. “A deep sense of our need, and a great desire for the things for which we ask, must characterize our prayers, else they will not be heard. But we are not to become weary, and cease our petitions because the answer is not immediately received. ‘The kingdom of heaven suffereth violence, and the violent take it by force.’ The violence here meant is a holy earnestness, such as Jacob manifested. We need not try to work ourselves up into an intense feeling; but calmly, persistently, we are to press our petitions at the throne of grace. Our work is to humble our souls before God, confessing our sins, and in faith drawing nigh unto God.” Review and Herald, February 9, 1897. Jacob wrestled with God with an earnestness and intensity that refused to let go, that clung to God until the answer was given. Jacob was “violent” with God in a way that He calls us each to imitate. God invites us to wrestle, plead, agonize, persevere, trust and surrender in prayer with a “holy earnestness.” How can we obtain this violent, holy earnestness? “Habitually dwelling upon Christ, His exalted character, and the all-sufficient merits of His sacrifice, increases the faith, sharpens the imaginative power, strengthens the longing desire to be like Him, and creates holy earnestness in prayer, that makes it efficacious.” Ibid., August 8, 1878. Beholding Jesus and dwelling upon Him gives us more and more holy earnestness until we become the “violent” who take the Kingdom of Heaven by the force of prayer. 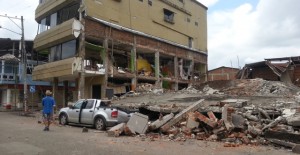 Destruction in a town near the Orellanas’ outpost

Sometimes our zeal and holy earnestness in prayer must translate into swift action, as well. When disaster strikes and people are in need, this is the time to move forward quickly to help those around us. About a month ago, Ecuador was struck with a major earthquake that caused terrible damage to many areas. The Orellana family praises God that He delivered them from any real damage besides a broken vase, but many others in their province of Manabí suffered much worse devastation. Immediately, the Orellanas went to work to help their less fortunate neighbors. Many homes were destroyed, some with the inhabitants still in them. Food, water and utilities were very difficult to obtain with banks and other basic services shut down. The youth being trained at the Orellanas’ mission outpost have a mission field right on their hands, and they are not neglecting the work. Soon after the quake struck, they began delivering water and other necessities to those in need. Caleb Orellana, the teenage son, developed a portable shower for the people’s bathing needs. The team bought as much rice, beans and canned goods as they could to distribute to those in need, and they also supplied hundreds of stocks of bananas and plantains from their own farm. Their mission right now is not to try to convert people, but to demonstrate the love of Jesus in ministering to needs wherever they may arise. Our mission is not just to preach the truth, but to live the truth, as well; and the Lord has stationed the Orellana family with their mission outpost to shine in this dark part of the world. If you would like to help them in their multifaceted work, you can mark your donation “Ecuador.” May we have that “holy earnestness” in prayer for the work going on in Ecuador and around the world!

Yours in serving others and beholding Jesus more,