Hello again from Senegal! Have you ever thought about how often we sing our precious hymns without thinking much about the words? Sometimes it’s not until life experiences bring the words back to our minds that we realize how meaningful those words really are. Lately, a certain song has been on my heart. God has been so good to me that I can’t help but sing, “To God be the glory! Great things He has done!”

Several months ago, I asked the Lord for a new car. My old 4×4 was giving me a lot of problems; so many little things were constantly malfunctioning. The Lord answered in an unexpected way: A day or two after my prayer I was involved in an auto accident. I thanked God that no was injured—but the accident did total the car. As I thought about what had happened, I realized that God was answering my prayers. Since the old 4×4 was out of commission, we would have to find a new vehicle!

Since then, I have seen the wonderful mercies of the Lord in my life. These mercies have been priceless! I still have plenty of challenges, but God sends beautiful beams of light to remind me that He is still in control.

Three months after the car accident I was still waiting to file my insurance claim. The insurance company required a copy of the police report, which I had not been able to obtain. Every time I spoke with the officials at the police department, the situation seemed more complicated. I kept being told that the report needed to be signed and stamped by an official who seemed to be perpetually out of the office due to his political activities. To compound things, two major national holidays involving several days of office closure delayed the process even further. During this frustrating time I had to be patient and remember that God was in control and that the paperwork would be completed in His time.

In the meantime I needed a car! I should not have worried; the Lord provided in a way that I would not have expected. It was another revelation of His mercy! First, I lost a teaching job three weeks before classes were to begin. Little did I know that the disappointment would open up another opportunity!

A few days after losing the first job, I was asked to teach some classes at a Christian non-governmental organization where I had taught about three years earlier. Not only that, but the organization signed a 10-month contract with me to give 13 hours of English classes a week to their managerial staff. They wanted me to help the managers improve their speaking skills, and as subject matter they asked me to use their organizational documents, which included their core values. Essentially I would be expected to talk to the Christian and Muslim staff about Christian values. What an opportunity—I would be paid to share God’s Word! 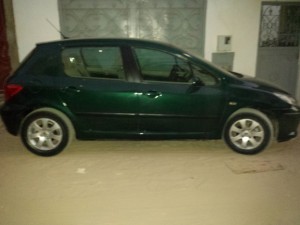 The Peugeot which the Lord provided at just the right time.

Although I couldn’t have anticipated it, this work arrangement also ended up helping me with the purchase of a vehicle. I had hoped that the insurance reimbursement would enable me to buy a car, but without a police report the insurance company could not process my claim. Yet the Lord knew our need and He provided. My new employer’s policy is to pay my salary every three months; but when I shared with them my need for a car, they advanced me 40% of my contractual fee. Mission Projects International also furnished some funds. Praise the Lord! We now have a small Peugeot that can take us to and from the village where we have our outpost center, as well as around Dakar. God has been so good to us!

Although we went without a vehicle for two and a half months, the car came at just the right time. The Women’s Ministries leader at church had asked me to hold a prayer retreat at the outpost, to which I readily agreed. We rented a bus to carry the women out to the retreat on Friday evening, but the question remained as to how we would transport the group that needed to arrive early to prepare. We would have a fair bit of baggage with the food for the weekend, which would make public transportation inconvenient—not to mention the fact that it would double the time required for the trip. Also, because the outpost is a distance from Dakar, the fees would mount quickly. We could rent a taxi, but that would be even more expensive than public transport. Once again the Lord showed His mercy just in time! A week before the retreat, we purchased the car and had our own transportation.

Twenty-seven women from the three churches in Dakar came together for the retreat. The theme was “Women, Wake Up!” We shared about maintaining a spiritual life, child rearing and evangelism. On Sabbath afternoon, we went into the village to hand out health books to local families. Saturday evening we did a Bible study on Revelation 12. Sunday morning we did exercises together before lunch. Then at noon the bus came to pick up the women. The menu, which in the past has always been an issue, was not a problem at all; everyone seemed to enjoy the vegetarian meals. All in all, we had an enjoyable weekend and strengthened our relationships with one another. 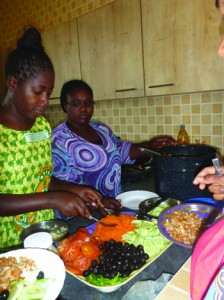 Food preparation at the women’s retreat.

The wait for the police report has been long. The wait for our water system at the outpost center has been even longer. When my patience is tried, I keep this quote in mind: “The season of distress and anguish before us will require a faith that can endure weariness, delay, and hunger—a faith that will not faint, though severely tried. The period of probation is granted to all to prepare for that time.” The Great Controversy (1888), 621. Right now, God is arranging tests for us to prepare us for the difficult days ahead. His mercy never fails, and His wisdom is unfathomable. He answers our prayers just in time!

When I wonder why my plans seem to be hampered, I remember the Lord’s counsel: “Let your prayer be, ‘Take me, O Lord, as wholly Thine. I lay all my plans at Thy feet. Use me today in Thy service. Abide with me, and let all my work be wrought in Thee.’ . . . Surrender all your plans to Him, to be carried out or given up as His providence shall indicate. Thus day by day you may be giving your life into the hands of God, and thus your life will be molded more and more after the life of Christ.” Steps to Christ, 70.

I know that God is in control. Will you join me in putting your life in His hands daily, allowing Him to mold, guide, strengthen and prepare us for eternity?