We left Kinshasa, the capital city of Congo, on July 15, 2015. I knew it would be a long, difficult journey and I wouldn’t be home for many weeks—but the Sankuru District needed to be visited. We would go to the villages and preach the gospel, visiting all our churches and opening new fields. 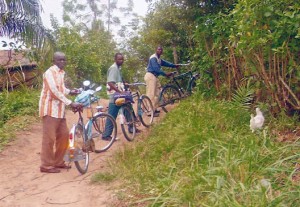 Brother Joel Mapamu and his companions.

When we arrived at Lodja, the administrative center of the Sankuru District, I called a meeting of all our fellow Adventists, who received us gladly. The local chief also was happy to see us and listened attentively to the message I preached that day. I then shared with the brethren our plans to travel throughout the Sankuru region, preaching and visiting.

After the meeting I looked over the Lodja school construction. The school usually functions well, but strong winds and rains on October 26, 2014, destroyed one part of the building. The tempest was so strong that tin sheets were actually carried away from the roof and destroyed by the winds. After the storm, the school was unusable, and the children were forced to have classes under the trees. We felt blessed to have such faithful instructors who kept teaching amidst adverse circumstances even though they also had to work to sustain their families through agriculture!

As we surveyed the damages, our brethren asked me to send thanks to all the people who helped them during that tragic, stormy time when many of our brethren were killed. We then took time to pray to God, praising Him and asking for His blessing during my stay in Sankuru. 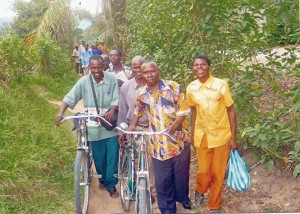 Traveling a jungle trail to one of the 16 villages on the trip.

After visiting the school, I made pastoral visits to the homes of the people, exhorting everyone to strengthen their personal relationship with God in preparation for our public meetings. During this time I also helped to organize the repairs of the school. Because the school had such a limited budget, I sacrificed part of our travel allowance to buy the materials to repair the roof. I praise God that we were able to make these repairs. The leaders of the town, including the mayor, expressed their appreciation for the Adventists’ efforts for their children, and we all thanked God and praised Him together.

After this we held an evangelistic campaign. We spoke about our Lord Jesus Christ and His soon return to the Earth, how to mend our broken relationship with God, and the prophecies of Daniel and Revelation. Adventists and non-Adventists alike attended the meetings, and the Holy Spirit brought many souls to conversion. In all, 127 were won to the gospel and 52 former church members were reclaimed for Christ. Many of the new people were eager for baptism, so I asked the local pastor to prepare them thoroughly to be baptized at a later date. 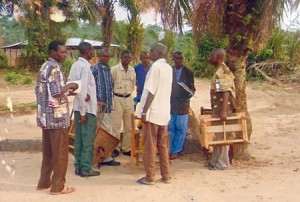 Visiting in the villages.

After the visit to Lodja, we went to Dikanda to preach the same messages there. All the residents of Dikanda attended the meetings, leaving their work in fields for five days to hear our messages. After listening to what we had to say, they confessed their sin of heeding the other churches that say the Adventists are a group of the witches. By the end of the meetings, 96 new souls had been won to Christ and ten who had grown weak in faith had come back to the truth. I left the new converts to the care of the older church members to prepare them fully for baptism.

While in Dikanda we also visited our missionary health center. The director shared with me the difficulties of working with outdated medical tools; but in spite of the challenges the workers are doing a good job, especially in treating malaria patients. The institution is a missionary tool to gain souls for the Kingdom of God. After helping the people with their medical needs, staff members take time to study the Bible with the patients—and so far, the patients are enjoying the studies!

Leaving Dikanda, we marched on for the love of our Lord to more remote villages. We had to go on foot to far locations, but God who sent us helped us persevere! 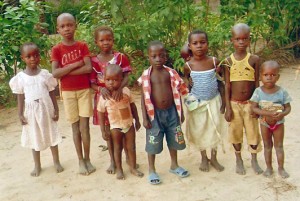 At Yenga, a village three kilometers long, we were sad to see that there was no school. The families are poor, and the youngsters live without any purpose. The children walk about without shirts because they don’t have any. When we preached the Word, we told the people that even though we may have food and clothing, if we don’t know Jesus, life doesn’t make sense and goes nowhere. We invited them to repent and accept Jesus, and we prayed for every family in the village. More than 550 members of our church heard the messages and 167 new converts joined themselves to the Lord. I intend to come back and baptize these souls after they have received more Bible studies!

At the village of Lutahe, 315 people attended our meetings and we gained 103 new converts to the Adventist faith. At Lushimba, of the 223 souls who attended the meetings, 52 new converts accepted the message and nine backsliders were reclaimed. Our brethren were very interested in the messages and only complained that our stay was so short!

I cannot tell about every village we visited because there were 16 in all! We praise God that amongst all these villages, 1,017 new souls accepted the truth and 153 backsliders returned to the Lord. What’s more, we planted four new churches!

In closing, I want to share a few of the needs in this district. The school in Lodja needs funds for basic supplies: notebooks, textbooks, crayons, pencils, chalk, etc. They are also asking for Steps to Christ and Education in French, as well as Bible stories for young and older children. Although they live in difficult conditions, the people believe God will never forget them.

The church at Yenga longs to have a school and a clinic in their village. The church of Mvunga also desires a school, and the believers in Lodja hope to build a clinic. All the churches need printed Bible studies, which we can print here in Congo if we have the funds. We also need 16 bicycles for pastors and workers, as well as some new chemises (shirts) for these shepherds. Every time I return from Sankuru, I have only the trousers and shirt I am wearing, because I give all my extra clothes to the needy people.

At the end of our mission trip, after two months of ministering in the villages, we returned to Lodja. We found my children very sad: Their mother was in the hospital in serious condition, and needed to have surgery to save her life. I rushed to the hospital to be with my poor wife during this difficult time. Praise God, she is at home now. I thank God that our brethren in Europe and America helped to pay for the operation and hospital stay. May God reward all those who shared!

By Joel Mapamu, a gospel worker in  the Democratic Republic of the Congo. For more information on how to donate to the projects mentioned, email  info@missionspro.org.