Have you ever led someone to Christ? Church planter Khaing Hlone* from Myanmar shares about three young people with whom he has studied. You will see there is a battle for each soul. 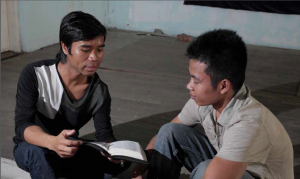 Every time Khaing Hlone gives Bible studies, Satan attacks him with fears. He wonders: will the devil snatch the seeds of truth out of this heart? Will this young man be able to stand against all the pressures from family, neighbors, and friends? Will she make the commitment to get baptized and become Christ’s disciple? The memories of those with whom he has studied who have rejected the truth stay fresh in his mind; however, he overcomes his fears by giving Jesus his burdens in prayer. He knows an unseen battle rages between God and Satan over every soul and though God allows choice, He works mightily.

Thirteen-year-old Nar Quik studied the Bible with Khaing Hlone. She grasped all the concepts and had a strong, pure faith in God. When she got close to the time of baptism, the spirit worshippers in the village fiercely attacked her. “You do not worship the true God!” they taunted. “We see dreams that come from God,” they claimed. “What dreams does your god give you, anyway?” Nar Quik responded, “You are mistaken. Your dreams come from Satan.” She opened her Bible and shared verses to back up her bold statement. Khaing kept praying for her and was surprised and joyful when she finally became baptized.

Dha Tun is a teenager who took Bible studies with Khaing, too. Dha’s father suffered from high blood pressure and a weak heart. Khaing shared the Seventh-day Adventist health message with him and he accepted it and tried to follow his suggestions carefully. When Khaing conducted evangelistic meetings in Dha’s village, he made an appeal for baptism, inviting Dha and the others to start a new life with Jesus. When Khaing and Dha’s eyes met, Dha looked quickly down to his feet. A battle raged in his heart. Later that night Dha told Khaing, “I am only coming to the meetings to observe what is going on.”

Lin, a young man Khaing grew up with, came along with him when he conducted evangelistic meetings and immediately connected with Dha Tun. Lin knew the gospel message and the Bible truths well, but had never been baptized. Khaing felt impressed to ask Lin if he wanted to be baptized that night. He said, “I’m just not ready yet.” That night Khaing wrestled in prayer over Dha and Lin’s souls. “Lord, give Lin a sign that he should be baptized!” Dha pleaded. “I am sure he is ready.”

That night Lin dreamed he saw a man with a shimmering white robe who looked like an angel. The next morning he came to Khaing and said, “The Lord showed me through a dream that I am to get baptized.” After he came up from the water, Lin shared his testimony. With tears in his eyes, he said, “My brother in Christ, Khaing, helped save me twice! When I was a young boy in our village, I went out with friends to take a swim in the river after school. I was caught in a currant and was sucked underwater. I almost drowned. Khaing saw me flailing for help and he had the courage to swim out in the river and rescue me. Now he had the courage to ask me to go in the water to bury my sins. I am so thankful to God for him.” He went on to share about his dream the night before. His testimony touched the hearts of all those in the church, and especially Dha’s. Dha stood up and walked to the front. “I want to get baptized today, too,” he quietly said. Praise the Lord for winning the battles for Nar Quik, Lin, and Dha Tun.

by Saw Peh Peh, as told to Julia O’Carey

Have you ever escaped a life-threatening situation and afterwards came to the conclusion that God saved you for a special purpose? 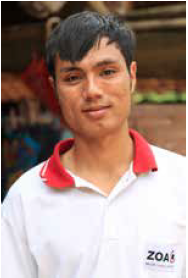 My name is Saw Peh Peh and I am from the Karen (Kah-REN) tribe of Burma, now known as Myanmar. My country is still fighting, but I trust in God for my protection. My friends and I made a plan to travel to my grandparent’s village. It had been a long time since I had seen them and I looked forward to this trip. My heart sang as we headed out by foot with just our small packs on our backs. We chatted and laughed as we went along and sometimes stopped for a drink and to listen to the interesting sounds coming from the large trees that loomed on either side. After walking many hours, we picked up our pace because we knew that we were nearing their village and besides, it was starting to get dark.  Suddenly we heard, “ATTACK!” harshly ordered in Burmese. Soldiers rushed out from behind some large teak trees. Guns in hand, they started towards us. We spread out quickly, fleeing deep into the jungle as they opened fire. “Jesus, help me! Jesus, help me!” I screamed in my mind as I dived face-first into the underbrush. I lay as still as a corpse for hours. Night turned into day and day turned into night. I dared not come out for fear of the Burmese soldiers.

After three days and two nights, I heard some Karen voices in the jungle. “Is anyone alive? Come out if you can.” The villagers had also fled for their lives into the jungle when they heard the gunshots so near. They knew that if they did not flee, the consequences could be deadly for them, too. I heard more voices calling. I was able to stand up and start stumbling towards those beautiful sounds. I did not even notice my parched throat and empty stomach. With much relief, I spotted my friends among the group that gathered in the forest. Yes, praise God! We were all there and though we had some cuts and scrapes, no one got shot and no one even lost their packs.

I often remember this experience because it showed me that God has a plan for my life. Right now His plan is for me to teach Bible class to 295 students in grades four, six, and seven at Karen Adventist Academy. I often talk with the eighth- and ninth-grade teacher, Eh Tha Blay, about our experiences because I believe God saved his life, too, so that he also could serve Him. When he was an animist, he traveled with his friends and the Burmese soldiers shot at all of them and he was the only one to escape. Even though he does not teach Bible class, he always tells his students about God so they will have a strong faith in Him.

I love teaching at the Karen Adventist Academy because each day I have the opportunity to share my faith with my students and the other teachers and to open the Word of God with them. From my personal testimony and from the stories in God’s Word, they see that nothing is impossible for God (Luke 1:37, my favorite verse). God’s love is shown by the teachers and students alike and this love is beginning to melt the hearts of the students who do not believe the way I do as a Seventh-day Adventist.

I have taught for only two years and consider myself a new teacher. Please pray that God will give me wisdom and that I will put on the armor of God daily so I can fight the devil’s attacks. Pray that all the students at Karen Adventist Academy will have hope for their future and will develop well physically, mentally, and spiritually.