Our family went to Honduras for our first mission trip. Thank God, I now understand fully the significance of the lyrics of the beautiful hymn, “Seeking the Lost.” As I stood outside the small home of a family in the village of Cerro de Toro singing these words, I sensed God’s guidance, knowing that the mission He gave me was to bring those in the mountains surrounding the town of Santa Barbara back into His fold of salvation. 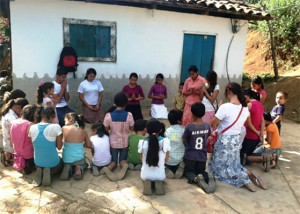 A Bible study class taking their gratitude and wants to Jesus.

During my three week stay at Maranatha Medical Ministries in La Zona, I had the opportunity to serve in several capacities. Throughout my stay, I was blessed to work on the organic farm, help with the prophecy seminars, the cooking demonstrations, and play guitar and sing for church members and villagers. All of the activities in which I was involved taught me impactful lessons about the gospel and Christ’s mission for me to serve others.

“Christ preached that the gospel is to be preached to the poor. Never does God’s truth put on an aspect of greater loveliness than when brought to the needy and destitute…lighting up the hut of the peasant and the rude cottage of the laborer.” In Heavenly Places, 234. 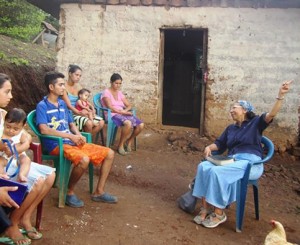 Elsa Willis preaching Christ to a family in Honduras.

I believe that the work that Maranatha Medical Ministries is doing in Honduras is the work of the Three Angels’ Messages. Every day while I was there, the ministry was actively involved in calling the people out of the darkness of Babylon into the light of the truth. Everyone, especially the youth, were involved in spreading the gospel, calling the people to worship the Creator and keep His commandments. Sabbath afternoons, in particular, were dedicated towards outreach, and the two Sabbaths that I was in Honduras stand out among my most pleasant memories. The youth from the church in La Zona would hike up to the village of Los Cerritos to give Bible studies. These Bible studies, during which we sang, prayed, and shared God’s Word, were the first time that I had ever witnessed a church so passionate about sharing the truth.

In the mountains of Honduras, away from the distractions of the first-world, God showed me that the message of His salvation is relevant to all, regardless of their language or status in society. The excitement of the villagers who were beginning to accept Christ took me almost by surprise. It was the first time I tangibly understood the liberating nature of the gospel. The clear truths that the Seventh-day Adventists in La Zona are sharing are not merely a call to obey God, they were messages of deliverance and hope. 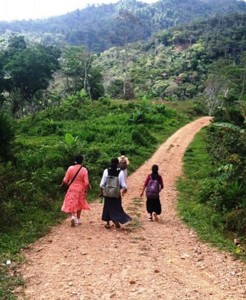 Hiking a long distance in the mountains to reach villages.

In Matthew 10:8, Jesus told His disciples: “Heal the sick, cleanse the lepers, raise the dead, cast out devils: freely you have received, freely give.” This is what I saw take place while in Honduras.

“Christ has given us a sacred charge, the fulfilling of which calls for self-denial at every step. When those who believe in Him are seen lifting the cross and bearing it after Him in the path of self-denial, willingly doing all in their power to bring blessing to those for whom Christ died, witness will be borne to the power of Christianity; and in the hearts of many, now unbelievers, will spring up faith in Him who gave His life to save a guilty world from eternal ruin.”A Call to Medical Evangelism and Health Education, 24.

As I traveled up the mountains on those Sabbath afternoons, and as I witnessed church members who were driven to share the gospel with others, I realized that sharing the gospel is not merely a command or an obligation, but a privilege—a natural outpouring of Christ’s love shining out of me to others, giving them the hope that Christ gave me!

God Cares For His People 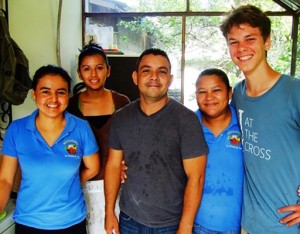 Going to Honduras was probably the most awesome thing I’ve ever done. I worked in the restaurant a lot, cutting up veggies and washing dishes, and putting together plates of wonderful food. The staff are great people—fun to be around and hard-working. They liked me and talked to me even though I couldn’t speak much Spanish, and they spoiled me and fed me great food! The restaurant is a huge asset for the ministry and they do a lot of outreach there. For the entire second week I was in Honduras they held prophecy seminars in the restaurant every night.

A seminar at the restaurant.

Every Sabbath afternoon, the youth from the Seventh-day Adventist church in La Zona go into the surrounding villages and do Bible studies with some of the people there. It was my pleasure to be able to go with them. After lunch, we would all get into the back of the truck and go down the hill and pick up the youth from the village who wanted to go with us. Then we were dropped off at the roads that led to each of the villages where the Bible study contacts were located. We would then hike to the villages and sing and pray and read the Bible with them. At church the next week I would see our Bible study students worshiping the Lord with us. It was a very satisfying feeling. 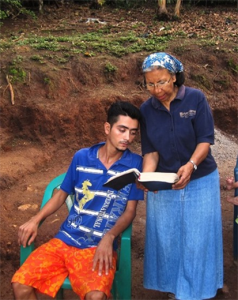 This young man had been shot in the stomach. Maranatha Medical Missionaries is providing him with colostomy supplies.

While in Honduras, I learned that God cares for His people. Of course, I already knew this, but while I was there I got to actually experience it and see it firsthand. Three things about God’s care stood out to me most:

He personally helped me several times while I was there. For example, I am very bad about cutting myself with knives. But every day in the restaurant I had to cut up food with very sharp, big knives. So every morning I would pray, “Lord, please help me not to cut myself so I can be a blessing and not get in everyone’s way and slow down the work.” And even though I had a few close calls, I never cut myself once, until the last day I worked there. That day, I had forgotten that God was the reason I had been doing so well, and I cut myself three times! Never forget where your talents actually come from.

Like I’ve already said, I know very little Spanish. But while I was working in the restaurant, the gardens, and other places where no one spoke English, God helped me understand and learn enough Spanish that I could communicate with the other people enough to enable me to be a blessing.

Maranatha Medical Ministries is supported by God. The organic gardens and the restaurant are meant to help support the ministry, but they sell the produce and food inexpensively so that the common people can purchase it. As a result, those industries aren’t making enough money to support the ministry. Mrs. Willis, the director, said she doesn’t know how it happens, but every time they have a need, the money is there.

When you’re working for God, God works for you. So take your time, your money, and your hands, and let God use them for His work. You will be blessed.