A Guide for God

I am Cabarot Fay and I am 65 years old. I live in the village of Saboy, Tupi, in the province of South Cotabato, Philippines, and I have seven children. My parents did not send me to school when I was a child, even though people said it was a place that could cure ignorance. All I learned from my parents is how to find enough food to eat by planting cassava, bananas, sweet potatoes, and corn to sell in the market. I can identify and count money but I don’t know my alphabet. In short, I cannot read. 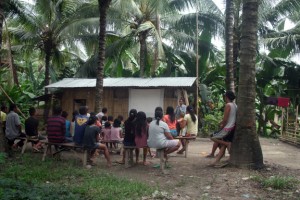 My parents never committed to any religion, but if people asked us what our religion was, they would say Catholic. As the years passed by I became a teenager and joined the New People’s Army (NPA). This organization is an enemy of the government. We secretly killed people who we believed were no good to society. We didn’t live in the mountains but as regular people in the villages. Eventually, I met a woman whom I wanted to marry, but she said she wouldn’t marry me unless I left the NPA. She was scared because if the NPA engaged in war with the government’s soldiers, she would become a widow at an early age. I surrendered the weapon they had issued me, because I loved her. We lived as regular citizens and were cooperative with the government. I am skilled in martial arts and I used this skill as our source of income. I fought in various regions until I achieved black belt. As time went by, I abused my body with many vices. When I drank I couldn’t control myself and would destroy the house. Eventually all our children were grown and gone and it was only my wife and I left in the home. 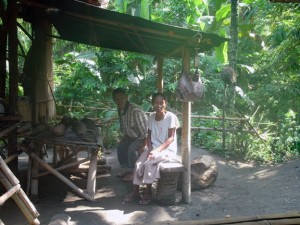 One Saturday morning I noticed a young man with his wife and little son. They would go to the church where two of my sons were members. Even though I’m not a member of that church, I knew who went there and who was new. I went into the church that morning and sat down on the last bench to try to see the man clearly. When he started preaching, I felt something different in my heart and it was a good feeling. It was about noon when I went up to him and asked him his name and how he came to be there. He said his name was Temtem and that he had come by this place only by God’s guidance because he was unfamiliar with this church. I invited him to return to preach again. My son is the pastor of this church and he talked to Temtem and together they shared the Word of God. It made my ears feel nice to hear it, and my heart felt very happy.

Many weeks passed before I saw Pastor Temtem preaching in this church again. I asked him if he could preach in the village of Saboy and he agreed. He made up a schedule for when it would happen and I was very excited! When the time came, Pastor Temtem preached to our village. I cannot read or write, but I clearly understand the doctrine of God. As many months passed, I became Pastor Temtem’s guide to preach in other places because I knew where they had not yet heard that Saturday is the true day of worship and how to receive Jesus Christ as our Savior. The last time I brought Pastor Temtem and his family to a village, there was no church and they didn’t have God in their lives. On our first night of preaching there, a drunk man unexpectedly began shaking the table where Pastor Temtem’s wife and little son were sitting, operating the laptop while Pastor Temtem preached. I prayed that God would have long patience and the drunk man would not hurt Pastor Temtem, because if that happened I would use my martial arts skills. But thank God, because the drunk man’s wife pulled him from the table to a distance from the place where we were preaching. He just stood there murmuring and shouting. But that didn’t hinder Pastor Temtem who just continued preaching. 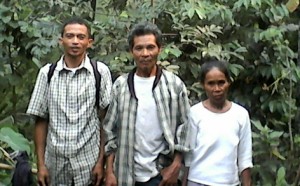 From left Pastor Temtem, Caborot Fay, and his wife Konsing.

After it was over and we went back home, I apologized to him, feeling embarrassed over what had happened. But according to him, it is normal. Sometimes when we preach in different places, we encounter different attitudes in the people.

Now, if God wills and will give me more strength and good health, I will continue to help Pastor Temtem reach the places where I know they don’t yet know the truth. I pray to Him to remove my weaknesses so that I would be worthy to serve Him. I still smoke sometimes and drink coffee, and I pray that He will remove those things from my life and then I will be baptized.

“We are not to wait for souls to come to us; we must seek them out where they are. When the word has been preached in the pulpit, the work has but just begun. There are multitudes who will never be reached by the gospel unless it is carried to them.” Christ’s Object Lessons, 229.

“The gospel commission is the great missionary charter of Christ’s kingdom. The disciples were to work earnestly for souls, giving to all the invitation of mercy. They were not to wait for the people to come to them; they were to go to the people with their message.” Acts of the Apostles, 28.

By Cabarot Fay, as told to Temtem Piedraverde. Support for the work in the Philippines may be sent to Mission Projects International, PO Box 59656, Renton, WA 98058.