Aravelys Rivera and her brother Samuel were raised in a Seventh-day Adventist home. Their mother was more active in the church than her father who eventually fell away in his faith. Whenever their mother struggled to teach them moral principles, their father would undo it all. He brought home the pleasures of the world: music, dancing, theater, fashion, and drinking. Despite of this environment, Aravelys developed a desire to serve the Lord, but the worldly distractions made it very difficult to do so and the atmosphere in the home grew worse.

Samuel joined the military and Aravelys went to a Seventh-day Adventist college in Maryland. It was there that she was introduced to drugs. Meanwhile, Samuel was sent to the front lines, doing a total of four tours in Iraq and Afghanistan. Receiving phone calls became nerve-wracking for Aravelys and fear of losing her brother sent her into depression. She lost herself in drugs and the party life. Her grades plummeted and so did her personal relationship with Christ.

When her parents moved to Florida they wanted Aravelys to join them. She thought the Lord was trying to tell her something and she knew her life was wrong, so she moved, telling the Lord that she desired to start over and do better. But Aravelys didn’t know what she wanted. Her mother’s family wasn’t Christian and they drank and lived the party life. Since these relative were very close to her family, Aravelys began to hang out with them, even though her parents disapproved.

One night, while out partying, she met a man who was interested in her. Even as she began a relationship with this man, she wanted to have the life she had in the past when she had a personal relationship with the Lord. But what she didn’t know was that her new boyfriend, Santiago,* was a drug dealer who sold heroin. He was so helpful, kind, pleasant, and funny, she never would have guessed the truth. But even though he was not the stereotypical dealer, he had already been doing it for ten years by the time they met.

As their relationship grew more serious, she found she couldn’t stand being in church anymore and she wanted to leave home. She told her parents she was moving in with her cousin, but actually moved in with Santiago. Eventually, she told her parents the truth and her mother was stunned and cried.

Aravelys lived with Santiago for about three years. She started doing drugs with him, first for fun, but then it became a daily activity and she again became depressed and lost 20 pounds. Life became a routine: he sold drugs, they did drugs, and they hurt each other. She wanted to leave but pride stopped her. She didn’t want to admit that her parents had been right.

Santiago’s boss was the drug lord in that area of Florida. She was the main source and Santiago was the second in command. But one day she was arrested. Everyone found out that one of Santiago’s other friends, Carlos, had snitched on her. ”If Carlos could do that to the leader,” Aravelys told Santiago, “he’ll do that to you. You need to get out.” Later they found out that when Carlos would come by the house to visit them, he was wired.

One day, Santiago left to do a drug deal. When he came back he kept looking out the window. Aravelys asked what was wrong, but all he would say was, “Nothing. Nothing.” Two hours later, a swarm of police came screeching up to the house and the SWAT officers busted through the front door. Santiago told her to run upstairs but she panicked and ran out the back door. He grabbed a box that contained drugs and followed her. But there was an officer waiting for them in the backyard. “Get down!” he yelled. They were handcuffed and taken back into the house where they were interrogated. Only Santiago was arrested and he was bailed out of jail after 13 days, leaving with an ankle monitor.

A few days later, early in the morning, the phone rang and she knew it was the police. Santiago answered it in the other room and she fell back asleep. He came back into the bedroom and left a large amount of money on the nightstand and left. Later that morning she received a call from the bail bond guy. “Where is Santiago?” She checked the house and he wasn’t there. The man said that the ankle monitor had been cut off in a town about an hour away. Aravelys’ heart sank. He never told her or his own family what he was planning to do.

The police didn’t believe that Aravelys didn’t know where Santiago was located and they kept interrogating and threatening her with prison time. Finally, they arrested her and she spent the night in jail. Her father came and got her the next morning, and she moved back in with her parents.

During the following weeks, Aravelys cried and prayed. She would read the scriptures and in them the Lord would answer her questions, and she recognized His mercy. She began going to church again, praying and reading every day, and seeing an improvement in her relationship with the Lord. Her faith grew stronger and she began making better choices.

Aravelys’ court date arrived and the Lord impressed her that she wasn’t going to jail, but she didn’t know how that could be. The day came and she got nervous and started crying. Her mother asked her, “Why are you crying?” and then told her the story of the dry bones in Ezekiel 37. “This is the Lord you serve.” When she said that, the thought came to Aravelys’ mind, “If I go to prison, it’s because you want me to reach someone there. If not, it’s because of His mercy.”

When it was her turn in court, her lawyer was nervous because the judge was known to be a “tough cookie” and went by the book. The person ahead of her had been ordered to jail. Aravelys went up to the judge and the prosecuting attorney attempted to charge Aravelys with possession of the drugs in the box belonging to Santiago. This carried a one-and-a-half year prison term. Her probation officer was there and he told the judge that Aravelys deserved to go to jail. She felt devoid of hope. 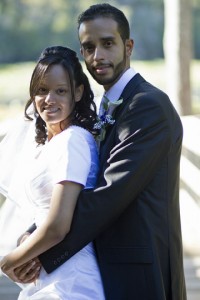 Aravelys, after conversion, with her husband, José.

Then her brother Samuel, wearing his uniform, went up to the judge. He said, “I’m about to be deployed overseas and I will not be able to do my job knowing that my sister was locked up. If I could do the time for her I would.” Aravelys’ father asked the judge to have mercy, while her mother sat there and prayed. Then it was Aravelys’ turn. She apologized to her family for embarrassing them and having to be involved. She told the judge she was making steps toward living a better life. “Please have mercy.”

The judge’s face softened and she said, “I’m going to give you a chance. Six months house arrest. No prison today. No less than one year and no more than five years probation.”

Aravelys was astonished and again recognized the Lord’s mercy. Later that day, her probation officer said, “Since I’ve been here I’ve never seen that judge do what she did today. You know you deserve to go to jail. You were lucky.” Aravelys said, “It was God.”

Aravelys and Samuel ended up moving to Arkansas and they were both baptized. She began her new life in Christ. The Lord gently changed her whole life and she eventually met José, a young Bible worker who treated her respectfully and kindly. They married and now do the Lord’s work together in the Portland, Oregon area. Aravelys is eternally grateful to the Lord for His great mercy and longsuffering and desires to live her life to glorify Him.