I want to share a wonderful experience I recently had. As some of you know, I work as a Bible worker for Highwood Health Retreat in Australia. We believe that our Seventh-day Adventist health centers not only help people get physically healthy but also share the gospel and lead souls to Christ. After all, that is what medical missionary work is all about.

As a part of my role here at Highwood, I call former guests to hear how they are doing, how they enjoyed their time with us, and what we can do for them in the future. As I talk with them I have one main aim: to find out if there is a window—an opening to share Christ with them. I also arrange visits with former guests who are willing.

One day, I called Maria. Maria had only been a day guest at Highwood a couple times, but it was enough for her name to get into my register. We talked for the first time over the phone in 2013, shortly after I started working at Highwood and she gave a little testimony about her stay with us. One of my little notes from that call was: “She is not Seventh-day Adventist, but likes Adventists. Ok with prayers during treatments.” 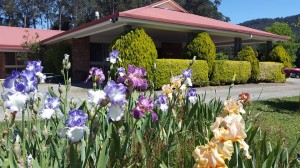 This time she was open to meet up with me. She did not invite me to her home, but suggested to meet in a nearby café. I stood outside the café waiting for someone I had never seen before. I did not even know if she was young or old, black or white. Before long, a well-dressed, middle-aged lady turned up. “Are you Maria?” I asked. “Yes,” she replied. We went into the cafeteria together, found a little table, and ordered some peppermint tea. At first our conversation was rather “physical.” I told her about what was happening at Highwood and she told me about her health problems. I got the opportunity to do some simple lifestyle counseling, which she really appreciated. But it did not take too long before the conversation turned to more spiritual themes.

She told me how tired she was of just “normal life.” Her friends liked to drink when they met up for parties, but she had no desire to drink and they found her a bit odd. She was also “done” with male relationships, and her son had grown up to have his own life and make his own choices. “Doesn’t the Bible say that we have to empty ourselves?” she asked. “I feel like I have emptied myself, but now I need something to fill me!” What an opening! “I have been praying for God to show me what to fill my life with,” she continued. I was amazed at God’s providence and told her I believed God had arranged for us to meet. I told her about the health meetings they often have in a nearby church, about health meetings at Steps to Life in Lilydale, and of course more about Highwood. She was very interested and wanted to know more and meet up with some of my Seventh-day Adventist friends. She really seemed to look up to Adventists, and she told me why.

When she was 21, she had a good friend named John. John was hanging out with her and some friends, but one day he turned his life around and became a Seventh-day Adventist. John had been a very good friend and invited her to come to a parenting seminar. It had helped her raise her own boy. John was also the one who had invited her to come to Highwood, and as I told you, she has been here two times as a day guest. Obviously John’s influence made a great impact in her life—about 30 years ago!

I also took the opportunity to offer her weekly health and Bible studies and she said yes! Praise God! We said goodbye and looked forward to the following week. A couple days ago I went to her home again. She has a beautiful, very tidy, and stylish home. We sat down in her comfortable lounge and had a good chat. After talking for a good while about her family situation and praying for a special need, I asked if we should start the Bible study. She agreed. “Do you have a Bible, as we will need it for the course?” I asked. She disappeared and stayed away for a good while. When she came back she had not found a Bible. She told me that she had cleaned up her bookshelf some time ago. Maybe the Bible had been put aside? 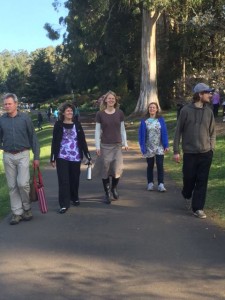 But while she had no Bible, she brought two thick books. “I got these books from John,” she said, “and I have saved them ever since. I read them a long time ago.” I looked at them. It was an old Desire of Ages, illustrated and in two volumes. “I wanted to keep them since I had got them from John,” she said. I told her, “It’s a very, very good book, Maria! You should read it again!” It sounded like she would. The Bible study went well and the whole visit was a blessed experience. We agreed to meet weekly.

The following day I was going to do street outreach in Melbourne together with two of the other workers here at Highwood: Jared and Michael. Maria had told me that John had helped construct the buildings at Highwood a long time ago. This place actually used to be a Bible training center. I knew Michael had been connected to the work at this property for a very long time, and I asked him, “Do you know John Lynch?” “John Lynch?! He is one of my best friends,” Michael replied. “In fact, he is going to be my best man in my wedding.” Amazing! And so I got the other side of the story. Maria had wondered if John still was an Adventist, and Michael told me he was a very solid one. I suggested that Michael invite John to come up to Highwood. I could invite Maria and we could all have some time together. I also sent a message to Maria to give her the news about John. Here is her reply:

“Hi Stine. That is amazing. John was a very good person when I knew him and I trusted him very much, too. I am glad to hear he is still an Adventist. Yes, please tell him I have the books he gave me 30 years ago.”

That is as far as I can tell the story. The next chapter is yet to transpire! Your prayers can influence its outcome.

“Cast thy bread upon the waters: for thou shalt find it after many days. He that observeth the wind shall not sow; and he that regardeth the clouds shall not reap. As thou knowest not what is the way of the spirit, nor how the bones do grow in the womb of her that is with child: even so thou knowest not the works of God who maketh all. In the morning sow thy seed, and in the evening withhold not thine hand: for thou knowest not whether shall prosper, either this or that, or whether they both shall be alike good.” Ecclesiastes 11:1, 3-6.