The Good News Deep in Ghana

The Lord Jesus said to Peter, “When thou art converted, strengthen thy brethren.” Luke 22:32. After His resurrection, just before His ascension, He said to His disciples, “Simon, son of Jonas, lovest thou me? He saith unto Him, Yea, Lord; Thou knowest that I love thee. He saith unto him, Feed my lambs.” John 21:16. This was a work in which Peter had but little experience; but he could not be complete in the Christian life unless he learned to feed the lambs, those who are young in the faith. 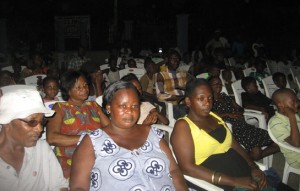 Listening to the Good News.

In Accra, the capital city of Ghana, lies Alhaji-Tabora, a predominately poor Muslim community with little or no knowledge about the Sabbath truth, not to mention the Three Angels’ Messages or health reform. Knowing the territory very well, we led a team of eight workers from Steps to Life to launch a 21-day crusade that turned out to be an eye opener for many. Our topics included the Sabbath message, spiritualism, the health message, and many more messages that were outlined to make people aware of the issues that pertain to their spiritual life, eternity, and their relationship with God.

Each night about 150-200 people attended. The crusade was led by seasoned speakers including Pastor BD Nuako, a naturopath, and evangelist Isaac Dwemena who took turns to explain vividly all the lessons that were laid open to the people.

An astonishing and emotional moment occurred when one sister, Hannah, became convinced that the Sabbath is the true day of worship. She broke into tears and confessed that she has been deceived by her Sunday school teachers and pastors. She pledged to obey the Sabbath truth and all the other biblical doctrines. She went to her former pastor and enquired if all this truth is in the Bible. The pastor told her that we are under grace, so you can choose any day to be Sabbath. “Don’t let this Adventist deceive you.” Hannah told the pastor, “I have chosen to go to church on the Sabbath, if we are under grace.” Praise be to the Lord! 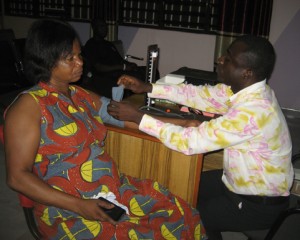 Since the open-air crusade ended, those convicted by the message have been taught in a hired classroom every evening and Sabbath day. It is sad that most of these people have no clue whatsoever about the present truth, which makes the work enormous. Strong efforts must be applied to take people out of spiritualist consciousness into believing in a loving God who created us all and who gave His only begotten Son to become our Redeemer from sin. This convert’s class has shown a tremendous turnout of about 21 people who are being given baptismal studies. The medical missionary team was also present to assist us with health screening which found pockets of people with high blood sugar and hypertension due to poor diet and lifestyle.

The Lord has been gracious to us and it’s our hope to launch more such efforts to plant more churches within the metropolis and its environs. 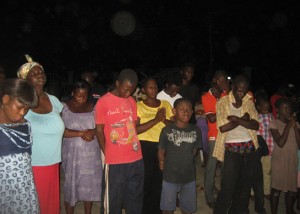 The guests praying with the evangelists.

This year has also been a blessed year for other types of evangelism. Door-to-door literature evangelism has become very effective for winning souls for Christ. We challenged every member to bring with him or her one or more new people to Bible studies every Sabbath. This has been very successful. We also teach them that the work of spreading the Good News does not depend exclusively on the minister alone but help from the members, too. The promise of Christ’s second coming was ever to be kept fresh in the minds of His disciples. “The same Jesus whom they had seen ascending into Heaven, would come again, to take to Himself those who here below give themselves to His service.” Acts of the Apostles, 33.

“It is not ministers alone who are soldiers, but every man and woman who has enlisted in Christ’s army; and are they willing to receive a soldier’s fare, just as Christ has given them an example in His life of self-denial and sacrifice? What self-denial have our churches as a whole manifested? They may have given donations in money, but have withheld themselves.” Christian Service, 35. 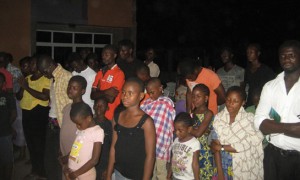 At the beginning of 2015, there were three evangelism crusades in the towns of Agona Swedru, Weija, and Alhaji-Tabora. We are working on contacting the heathen and idol worshippers who have been unreached in Ghana and who are ignorant about the Sabbath and or even that God exists. With your support, we have been active in evangelism campaigns. As a result of these campaigns we have established three Sabbath School branches, which, along with the newly-formed churches, are on the increase. In the response to the Lord’s commission, we decided to bring the Good News to some unevangelized towns in Ghana. The Alhaji-Tabora area is known to be a stronghold of Islam and pagan idol worship. So far, amidst scarcity and difficulty, the Lord has blessed us by raising a church there. Praise be to God!

The follow-up work still continues, and we need your prayers for these new converts to be well grounded in the Lord. “Remember that you will never reach a higher standard than you yourself set. Then set your mark high, and step by step, even though it be by painful effort, by self-denial and sacrifice, ascend the whole length of the ladder of progress. Let nothing hinder you. Fate has not woven its meshes about any human being so firmly that he need remain helpless and in uncertainty. Opposing circumstances should create a firm determination to overcome them. The breaking down of one barrier will give greater ability and courage to go forward. Press with determination in the right direction, and circumstances will be your helpers, not your hindrances.” Christ’s Object Lessons, 331.