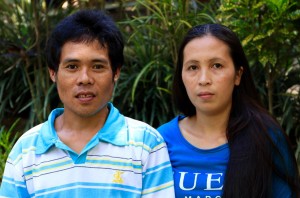 Pastor Dolphie and his wife

Many times, I have thought about the question Pilot asked Jesus during His trial, “What is truth?” John 18:38. Yet, not waiting for the answer, he passed up this golden opportunity. The truth has the power to save every person who puts his or her complete trust in it. “Receive with meekness the engrafted word, which is able to save your souls.” James 1:21. Unfortunately, many today, like Esau, are willing to sell the truth for a lie. “And with all deceivableness of unrighteousness in them that perish; because they received not the love of the truth, that they might be saved. And for this cause God shall send them strong delusion, that they should believe a lie: That they all might be damned who believed not the truth, but had pleasure in unrighteousness.” 2 Thessalonians 2:10-12. How the world needs men and women who will give everything for the truth today! “The greatest want of the world is the want of men—men who will not be bought or sold, men who in their inmost souls are true and honest, men who do not fear to call sin by its right name, men whose conscience is as true to duty as the needle to the pole, men who will stand for the right though the heavens fall.” Education, 57.

I have just returned from a trip to the Philippines where I met a man who stands for the right, no matter what. Dolphie is a pastor of a Sabbath-keeping group that discovered the truth about God’s true day of worship from a publication printed by Cornerstone Publishing. A leader from one of the largest churches in the Philippines offered him a salary, generator and two sacks of rice per month if he would give up his Sabbath ideas and join their church, but Dolphie refused, preferring to obey God rather than man. Dolphie began to pray that God would send someone to him who would give him further light, beyond just the Sabbath. Through providential leading, Pastor Temtem, one our workers in Mindanao, met Dolphie and was invited to speak at Pastor Dolphie’s church one Sabbath. After hearing two messages from Revelation 14:6-12, Dolphie wanted more, so Temtem began a series on the prophecies of Daniel and Revelation. After hearing a number of sermons, Dolphie realized that God had answered his prayers. When I arrived in his remote village in South Catabato, I had the opportunity to meet and share from the Bible with him and his congregation. He was amazed at the clarity of the Scriptures on the teaching of the Millennium, the 144,000 and other topics. Dolphie’s Sabbath-keeping group has four pastors and about 3,000 members and several thousand observers. Two of the pastors have chosen to join the Seventh-day Adventist movement, while the other two are still opposing the full message. Many of the church members are excitedly receiving the message, even walking ten or more miles to join in worship with the churches that are accepting the three angels messages. There is a great need of more workers who can travel to these even more remote villages and churches to share the truth with them. We are asking that you prayerfully consider helping to support more workers in the Philippines. Please mark you donation, “Philippines.”