“The righteous cry, and the LORD heareth, and delivereth them out of all their troubles.” Psalm 34:17.

As the time passes and we near the Lord’s second coming, the promise from Psalm 34:17 becomes dearer to our hearts. This past year has been full of challenges and at the same time we have seen God’s delivering power working on our behalf. As in the experience of the children of Israel, we can also cry to the Lord in our troubles. He is faithful no matter our circumstance. We have experienced His deliverance from both small and big troubles.

One area that has been a challenge is getting experienced help on the farm. People in our surrounding communities who used to work in agriculture have migrated to other areas or are working in hydroelectric projects that pay better than farm work. Last year it was wonderful to see God intervening and helping us just when we needed it most. During the planting season He brought the help we needed at the right time. We had a young Adventist man that came with an acquaintance of his and helped us plant the corn at the start of the rainy season. And at the harvest season, God also brought the help we needed at the specified time. We are asking God, in special prayer, that He will send the right person with experience to help manage our farm on a permanent basis. 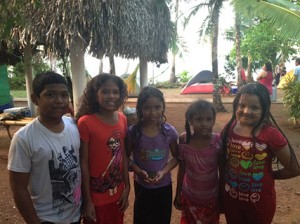 Island children curious about the newcomers.

We continue to help with health fairs in various locations. As the pastors from different districts get to know us, they ask us to support their health outreach activities. At the end of last year, we were invited to go to the island of Cébaco. It is located off the coast of the province of Veraguas, on the Pacific side. Until recently, there were no Seventh-day Adventists there. When we were there we presented the health message and gave free health consultations. The people of the island have limited access to fresh vegetables, since they have to bring them from the mainland. Hypertension, diabetes, and digestive problems are major health challenges. During our visit, it was rewarding to be able to help a young lady who introduced herself as an ex-Adventist. She suffered from severe depression and stated that she had cried out to God to send someone to help her. She had tried antidepressants, but felt worse and had stopped taking them for some time and wanted something natural to help her with the depression. She felt so appreciative for the help we gave her and thanked the Lord for sending us there.

One morning, as we sat at the beach looking toward the mainland, the pastor who invited us came up to us and told us about the many little towns that were along the coast of Veraguas. He mentioned to us that there was no Seventh-day Adventist presence in any of them. The Adventist message here in Panama has had good progress in the northern provinces of Chiriquí and Bocas del Toro. The message has also been received in Panama City, the capital, and the province of Colon. But the central provinces have very little Adventist presence. There was a project that took place at the end of February where many young people participated in short evangelistic campaigns in various places in the city of Santiago. Our ministry, Living Springs of Health and Education, was able to donate several hundred pieces of literature for that outreach. 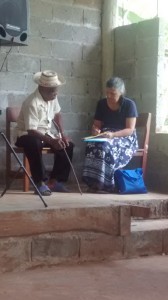 In this work, we have experienced that, as God leads, no call or meeting is a coincidence. Every opportunity is God’s appointment. Just last month we went to a health fair in the District of Bugaba. Pablo was going to give a health lecture and I was to give health consultations. As we arrived at the school where the fair was going to take place, we noticed that the coordinator had placed us in the same classroom. I told the coordinator that I needed a more private area to do the consultations. He arranged for me to be in a gazebo outside the building and left Pablo in the classroom. Later, a pediatrician came late to give consultations and was somehow placed in Pablo’s classroom. As she performed the consultations, she was able to hear Pablo’s health lecture. At the end, she asked him if we could go to a major health fair that would be taking place in her district. She stated that the medical personnel in this country are realizing they cannot curve the rise of chronic diseases and that teaching prevention is one way to help solve the problem. She also invited us to give a health lecture to a team of professionals. God is sure opening the way to allow His health message to be added to the knowledge of those in charge of providing health care.

Another area where God has provided is our church. We have held successful Vacation Bible Schools (VBS) for the past three years. Our church has been in the top ten churches of the conference with the highest attendance of children during the VBS. As follow up to this outreach, the church took the initiative to start a Pathfinders club. We have been blessed to have a couple experienced in working with Pathfinders join our church and they have been leading in this area. After our last VBS, we had 12 children from the community join Pathfinders. Most of these children come from poor families and it has been rewarding to see them learning about God and participating in activities that they would otherwise never enjoy.

We’ve also seen God working within the members of the church. Recently we had an evangelistic outreach and 15 people, both members and former Seventh-day Adventists, stood when the call was given for rebaptism and recommitting their lives to God.

Our challenges have been God’s opportunities. As the Psalmist said, “The righteous cry, and the LORD heareth, and delivereth them out of all their troubles.” We continue to move forward in faith. We want to thank all our faith partners everywhere. Thank you for your prayers and donations. We are encouraged by His promises, as the following quote taken from The Desire of Ages states: “The work of building up the kingdom of Christ will go forward, though to all appearance it moves slowly and impossibilities seem to testify against advance. The work is of God, and He will furnish means, and will send helpers, true, earnest disciples, whose hands also will be filled with food for the starving multitude. God is not unmindful of those who labor in love to give the word of life to perishing souls, who in their turn reach forth their hands for food for other hungry souls.”370. May God continue to bless you as you also move forward trusting in Him.

By Zaida Acosta of Living Springs of Health and Education. 4asaved2serve@gmail.com.