Believe That You Receive Them

Several years ago, I took the board exam for professional teachers in the Philippines. I flew from Davao City to Bicol Region. As the sun was setting that day, I began looking for my room and saw a young man who was also examining his exam schedule. We began talking and I found out that his name was Jeffrey and he was from the same province where my father grew up. He was still looking for a room, but all the rooms in all the inns were fully booked. I offered him to stay in my room and he gratefully accepted.

That evening, my new friend took study materials out of his bag. The stack was very thick, nearly a foot high. I had my study materials with me, too, and my pile was just as thick as his. As he began studying, I asked, “How many times have you taken the board exam?” He replied that this would be his third time. When I heard that, I said that it seemed impossible to sink all this information into our minds.

My cousin texted me that night. “I know that you can’t sleep. That happened to me before my board exam.” I asked Jeffrey if this was true for him, as well, and he agreed that it was. I told him that we have to sleep because physiologically our brains can’t function well if we do not have proper rest. I then asked, “Do you have a Bible?” He didn’t. I asked him if he had ever read a Bible, and the answer again was “No.” I got out my Bible and told him about God’s promises. I said, “You have a child, right? Imagine your child asks you for bread. Will you give him a stone or a snake?” “No, obviously,” he answered. Then I read some Bible promises to him.

“Ask, and it will be given to you; seek, and you will find; knock, and it will be opened to you. For everyone who asks receives, and he who seeks finds, and to him who knocks it will be opened. Or what man is there among you, if his son asks for bread, will give him a stone? Or if he asks for a fish, will he give him a serpent? If you then, being evil, know how to give good gifts to your children, how much more will your Father who is in heaven give good things to those who ask Him!” Matthew 7:7-11.

When I finished reading, I saw tears falling from his eyes and I prayed for us before we slept. That night I slept soundly and when I awoke at 4:00 am I saw that Jeffrey was in a pile of papers, studying. The exam would begin at 7:00 am and I had only a few hours left to study. I knew it would be impossible to read through the entire stack. I asked him if he would be able to complete them and he said he wouldn’t. I told him about God’s promise in James 1:5: “If any of you lacks wisdom, let him ask of God, who gives to all liberally and without reproach, and it will be given to him.”

I invited him to study and claim Bible promises with me instead of studying for the exam. He declined, stating, “I have to read my study materials.” In that moment he chose to study his papers and I decided to study the Bible.

“There is no book from the perusal of which the mind is so much elevated and strengthened and expanded as the Bible.” Manuscript Releases, vol. 2, 244.

“There is nothing more calculated to energize the mind and strengthen the intellect than the study of the word of God. No other book is so potent to elevate the thoughts or give vigor to the faculties, as the broad, ennobling truths of the Bible.” Gospel Workers, 249. 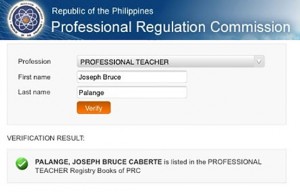 Passing the teachers board exam.

When I began my education studies, my plan was to use this profession to establish a church school. So, I believed that God would allow me to pass the board exam and there was one thing I asked Him to do. The passing grade was 75, and I asked, “Father in heaven, I entered this profession to advance Your work. I want You to reveal Your power by answering my prayer. Don’t give me a high grade because I might glorify myself and sin against you. Just give me a 75 to keep me humble and glorify your name.” A few days after I completed the board exam, the results came in. I looked for my grade and saw that it was exactly 75. God truly granted and answered my request! I praised God that I had learned to give Him my plans. I also learned that, sadly, Jeffrey had not passed. 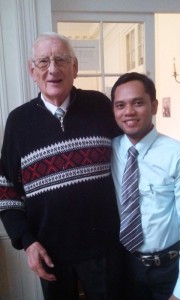 The author right with Dr Standish at Hartland Institute.

After this, I prayed to go to Hartland College in the United States and learn more. I went to the consul to apply for a visa and waited for my turn to be interviewed. I watched as many ahead of me were rejected. When it was my turn the consul just asked me, “What are the beliefs of the Seventh-day Adventists in regards to death?” I answered that we believe that death is a deep sleep and, if righteous, we will be resurrected when Jesus comes. The consul granted me the visa and I was so thankful to God!

The first leg of my trip to the United States landed me in Abu Dhabi. I waited there for six hours. Ten minutes before my next flight, the immigration officer told me that I had to pay the SEVIS fee, a required fee for student visas. I asked him what would happen if I couldn’t pay and he responded that I could not enter the United States and would have to return to the Philippines. I was told I had to pay $200 US. When I heard that, I thought it was impossible. I only had $100 in one of my wallets amazon. But I knew it was time to trust in God’s promises. I said to the officer, “Can I give you $100 and I pay the remainder when I arrive?” He got angry and told me I had to pay now or I could not enter. I gave him my money and he said they only accepted credit cards. I had cards but I had used them to purchase my airline tickets and now I had no more available credit. I asked several people for help, telling them I would pay cash if they would use their cards to pay my SEVIS fee. But everyone said no. Time was running out and the plane made its last call. I just handed over my cards and asked God to create a miracle. The first card was declined. When he entered the last card, I closed my eyes and prayed. When I opened my eyes the officer said, “Run to the plane.” He handed me the receipt and I ran and got on, just as the door closed behind me. God’s name is worthy to be praised!

“Ask God to do for you those things that you cannot do for yourselves. Tell Jesus everything. Lay open before Him the secrets of your heart; for His eye searches the inmost recesses of the soul, and He reads your thoughts as an open book. When you have asked for the things that are necessary for your soul’s good, believe that you receive them, and you shall have them.” Prayer, 100.

By Joseph Bruce Palange. Lotministry@yahoo.com. Support for this work can be sent to: Mission Projects International, PO Box 59656, Renton, WA 98058.