Reuben Teske was a man who “died with his boots on.” He was 90 years old on January 24, 2015, but was still working for the Lord when he passed away on March 13. Reuben founded Cornerstone Publishing about 17 years ago. Over the years he may have put out more literature to more countries and more people than any other ministry. Prior to the inception of Cornerstone, Reuben worked worked for 40 years as an accountant and systems analyst for Boise Cascade, a major corporation. He retired from Boise Cascade at age 62, but he certainly was never idle. His wife Jean operated a beauty shop for 25 years. 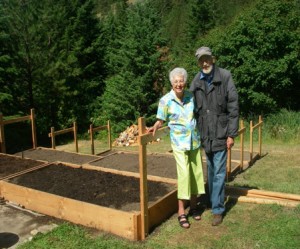 Reuben built grow boxes next to their house.

In the past, Reuben Teske was a man of many ventures, which were very successful in making money. He bought businesses and houses and fixed them up and resold them. Hardly was he done with one project when he was beginning another. It is unknown how many houses he and Jean lived in, but there were a lot. You would think a man who was onto one project before he was really finished with the last one would have had many jobs and many employers, but Reuben held one job until his retirement. It was the same with his work for the Lord. Although he had many jobs in the Lord’s vineyard, he continued to have the same employer: Jesus was always his boss. Before they began publishing the Three Angels’ Messages, Jean and Reuben operated a cherry orchard together for ten years until the Lord sent a cash buyer in His timing and price—a miracle to be sure.

Even before they started Cornerstone, Reuben and Jean were very active in their community. They covered the local neighborhoods, passing out National Sunday Law, The Great Controversy, and other Seventh-day Adventist literature. The publishing work had humble beginnings in Oregon, but that was the start of a remarkable journey. Early on, a few people took several weeks off and distributed 70,000 copies of Earth’s Final Warning, a 16-page booklet, from door to door in Portland, while covering Alaska and Idaho by mail at the same time. This grew into sending literature to the world. The first printing of 50,000 grew to 950,000. Future printings were as many as 8 million. Earth’s Final Warning was just the first of many tabloids. 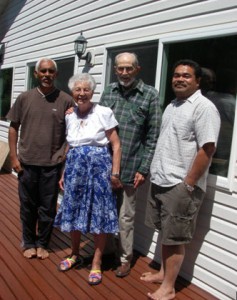 Jean and Reuben (center) with Gabriel Simpson of Figi (left) and David Vaipulu of Tonga—recipients of Cornerstone tabloids.

Eventually, Cornerstone Publishing was formed—a non-profit ministry of Seventh-day Adventist laymen who have accepted the commission of our Savior to spread the message far and wide to hasten His coming. Cornerstone accepts no salary, no traveling expenses, or stipend. All donations are used for printing to send truth-filled messages around the world, as well as a monthly four-page newsletter.

Reuben and Jean, despite sacrificing for the ministry in these expenses, also gave a great amount of their own money to the ministry, the amount of which may never be known. The sale of their cherry orchard financed some of the large printing press runs in the beginning. God certainly provides for His ministry and His workers.

Reuben had a love for the message—the Three Angels’ Messages. His project-oriented attitude was seen all throughout his life in God’s service. He seemed to always be thinking. Even before one shipment was completed, Reuben was starting on another printing or another project.

Reuben had a very sharp mind and an unmatched memory. Even the day of his death he was on the phone to several people trying to make sure Cornerstone would get at least one more printing accomplished. Reuben didn’t only have a sharp mind, he also had a loving and caring heart. Many times throughout their lives, he and Jean helped friends and family members financially, or whenever people had dilemmas—for Reuben was particularly good at figuring out solutions to problems. God needed somebody at the helm of Cornerstone to take care of all the many problems that come up when shipping millions of tabloids to many countries in many different languages. Reuben was God’s man.

Another thing Reuben was good at was finding the right person to help with a project. He had people to coordinate the receipt of shipments in many places around the world; people to translate the tabloids into many languages; people to format the tabloids; and people to edit the tabloids and newsletters. He even drew Ron and Margie Carter up from Southern California to be his partners, neighbors, and friends. Reuben had a way of drawing people into his work. That was a God-given gift. 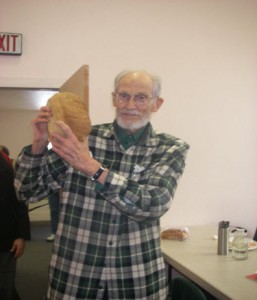 Reuben with a loaf of bread he made at a Three Angels Historic Church cooking class.

As of this past spring, approximately 402 containers have been shipped to different parts of the world in many languages. Each container holds 630 boxes and each box holds 750 tabloids for a total of 472,500 tabloids per container. Do the math to find out how many tabloids have been shipped since the beginning of the ministry and you will be astonished. Praise the Lord!

Anyone who is familiar with Reuben’s work has heard stories of many churches and villages and families and individuals who have started keeping the Sabbath and learning all the Seventh-day Adventist truths because of the tabloids. It is safe to say that the Lord has truly blessed the work of Reuben Teske.

“Those who labor for souls must attain to a deeper, fuller, clearer knowledge of God than can be gained by ordinary effort. They must throw all their energies into the work of the Master. They are engaged in a high and holy calling, and if they gain souls for their hire they must lay firm hold upon God, daily receiving grace and power from the Source of all blessing. ‘For the grace of God that bringeth salvation hath appeared to all men, teaching us that, denying ungodliness and worldly lusts, we should live soberly, righteously, and godly, in this present world; looking for that blessed hope, and the glorious appearing of the great God and our Saviour Jesus Christ; who gave Himself for us, that He might redeem us from all iniquity, and purify unto Himself a peculiar people, zealous of good works.’” Titus 2:11-14. Acts of the Apostles, 205.

Editorial note: Vance Ferrell of Harvestime Books is taking over as the new head of Cornerstone Publishing, working closely with Ron and Margie Carter.