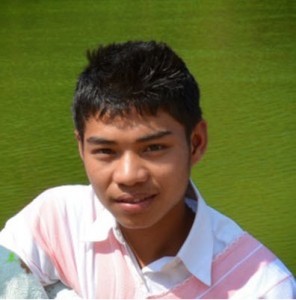 I am a Karen from Myanmar. I once had a peaceful family. I lived with my parents and my older brother. My father went to work in Thailand, but one time when there was war, he went to the hospital because he had problems with his legs. My mother went to stay in the hospital and take care of him. One day, she was holding me in her arms and feeding me. My brother was with us. We were in front of the hospital when a battle started in Myanmar, and a bullet shell from a big gun landed in front of the hospital. There were many people sitting in front of the hospital, but my mother was the only one who got hit. I was in her lap when she died, but I did not know anything because I was only five months old. My brother was two years old. Because of my mother’s death, our family was no longer a peaceful family.

After my mother died, my father had no money to buy milk for me, so he walked around holding me in his arms looking for someone who would feed me. He found people here and there who were willing to feed me, and this continued for about two months.

My father had an older sister who was in Myanmar in a village called Naw Nee. She asked if she could take care of my brother and me. I grew up with her and called her mother. While I was growing up, I did not listen to her, I just did what I wanted to do. I began to hang out with some older people and learned to drink and use drugs. I was very naughty. My mother who was caring for me tried to teach me and spanked me so that I would be good, but it did not work.

I hated Christians. In my village there were some Sunday Christians, but I did not want to listen to them. By the time I was 15 years old, I was not on the right path, and what I wanted to be was not a good thing. While attending school in 2010, my goal was to become a gang member.

My brother was going to school in Thailand, at Sunshine Orchard School. The only thing I heard about the school was that it was Seventh-day Adventist. My brother came home and asked for permission to get baptized. I tried to keep him from doing that. I said, “Don’t get baptized! We will have to be separated, and I’m naughty and wicked.”

Our mother who was caring for us was very heartbroken because I was so naughty. She did not know what to do. At that time I did not want to attend school anymore. I wanted to go to Thailand, so I went to live in Mae Salit where I found a job. It was hard because I did not want to work. All I wanted was free time to do my own thing.

My uncle registered me at a school called Noe Bo, but I did not want to go there. Instead I asked to go to school with my brother at Sunshine Orchard. So in 2011, I started school there, but I was not happy because my brother had decided not to go to school anymore. That meant that I would have to find my way at the school all by myself.

When I first arrived, I did not want to listen to the rules of the school, and I always tried to do the opposite. So during my first year I drank and used drugs. Later the teachers found out and I was punished. I had to work extra for three months, and while I was doing my punishment I thought back on my life. I thought about being an orphan and why I was such a bad person. I tried to be faithful and work hard in my punishment.

At that time, our school principal was giving Bible studies in the evenings. I went to each Bible study and I experienced a feeling as if a new heart had come into me. There was one Bible topic that I felt was a little bit different, and that topic was about how we need to ask for new hearts from God. At that time I did not really know God. I thought, “I am such a bad person, how can someone change me? My mother could not change me; my father could not change me. Who will be able to change me?”

But I did want to change. And I wanted to ask God for a new heart. Although I was a little afraid, I tried very hard to get into the habit of praying to this new God. I did not ask for anything special. All I asked for was what I really needed—a new heart. And I know for sure that God answered my prayers, that He can do anything, and that He showed me the truth and helped me to listen and be obedient.

At that time I wanted to be baptized, but I was afraid of my mother and father who had taken care of my brother and me. I went to church in Mae Salit one Sabbath, and they were having a baptism. I sang with the choir for the baptism and watched it, and I was very heartbroken. A struggle started inside of me because I had not yet allowed Jesus Christ into my life like these people had.

That night all I could think about was, “What if Jesus is calling me to become His child?” I thought about being His child and everyone in my family learning about Jesus, the One who created heaven and earth, so I decided that I would follow Jesus Christ. I did not want to be afraid in this world anymore. I had learned all about Jesus who loves sinful men and who came and suffered so much for sinful men so that we could have the opportunity to suffer for Him. At that time the Holy Spirit was really working in me so that I would choose to follow Jesus Christ. So I was baptized and chose to follow Jesus Christ with many brothers and sisters in Christ. 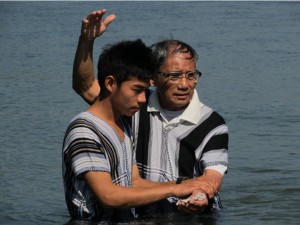 My mother, father, and brother did not know that I had been baptized because I did not tell them. I knew they would not let me be baptized. But I was already baptized, so during the summer school break, I went home to tell my family the news.

In my village there are no Seventh-day Adventist Christians like me, so there was a lot of difficulty for me. When I went home, I was newly born in Christ, so my faith was not strong. But I tried to work and help at home as much as I could, like collecting firewood and doing laundry. When I first returned home, my father and brother were not there. When they came home later, my father had already heard that I was baptized. He was very angry and threatened to hurt or kill me. Then he went and drank and came back drunk and threatened me more. My mother developed heart problems from me getting baptized and all the stress that came with it.

I tried to stand for God the best I could and to show a good example for my family. There were many temptations while I was home, but I prayed to God for help, and He did help me. When I got back to school, I was encouraged, and I decided I needed to keep working for God. Now I am trying to learn to work for God better. I have a heart for missions because I was in darkness for 15 years. Because of the missionaries here, I have found the true light.

I want to thank Paul and Lena Adams and their children for starting and keeping this school going and for giving themselves to the Karen people in His service. I also want to thank Harvey Steck and his family for teaching us the Bible. Now I want to show my thankfulness by sharing my testimony with you all. I hope that everyone in the darkness will see the true light. Thank you all!